Here is a position presented in O Meien's NHK Lecture volume (Japanese), Develop Your Stones Meien Style (2002, ISBN4-14-016113-2). The question under discussion is the biggest move on the board, Black to play: 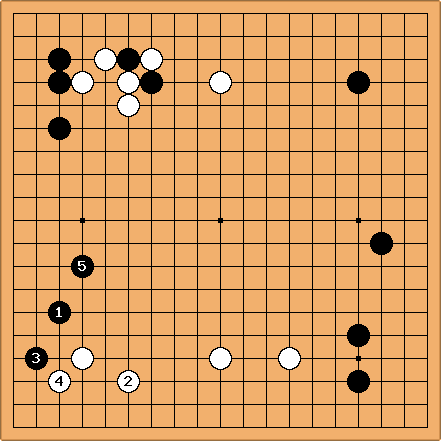 , in the largest open side area, with this possible continuation. 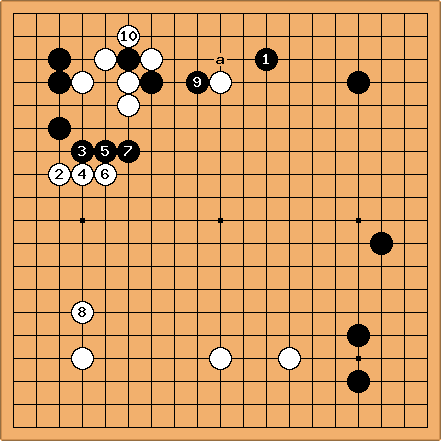 is also big, but not big enough because, according to O Meien, even if B gets the displayed sequence, ending with Ba after

, W's left side and moyo is bigger than B's upper right corner and moyo. 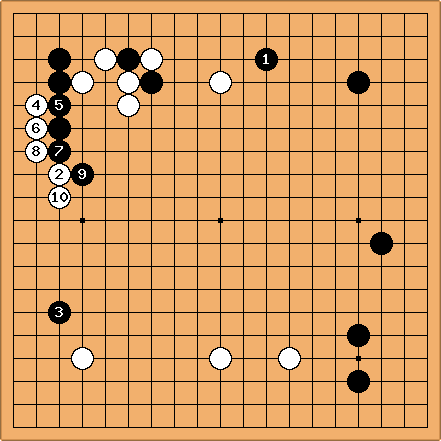 If B tries to get both moves in, starting with the top, the placement

could happen, with B ending up with an eyeless, attackable group. So my question (finally!) is this: 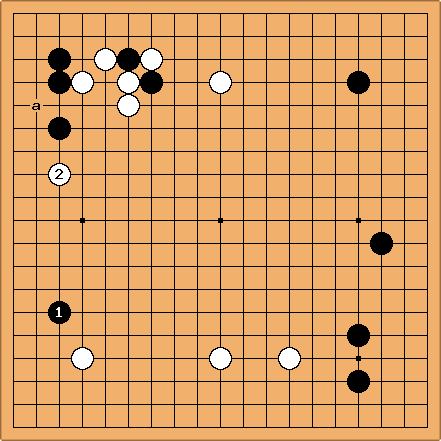 Even after the recommended

at the lower left, W could still play

, threatening the same nasty placement at a. How should B counter this without looking like the third diagram and without letting W develop a position down the left side and catching

in a serious pincer attack? Or should B take the pincer attack, if it comes to that, and get his compensation by playing into the 3-3 point? Remember,

is supposed to be the biggest move on the board. Thanks. --FredK 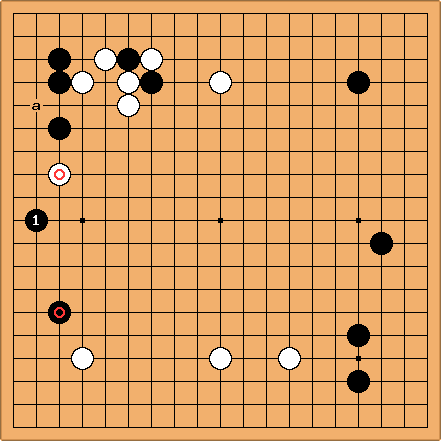 Jeff: My first attempt. By extending at 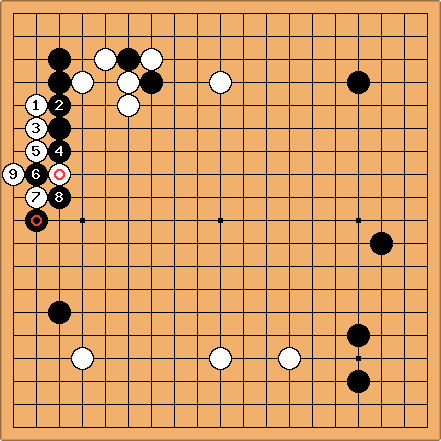 If white tries the placement... 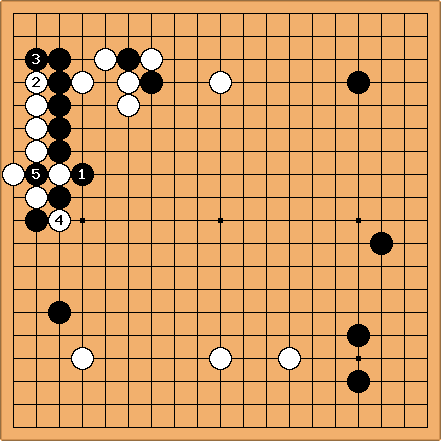 Now, white has a ko for life at best (or at least to the best of my reading). And white has to make the first threat. Unfortunately. it seems a minor loss if white loses this ko, but if black loses, he's left with two weak groups. Ouch!

MrTenuki (KGS 3k): I don't think the "ouch" comment really applies, because white has to make the first threat. Judging from the fact that this is the full board, I would ignore any threat as black. 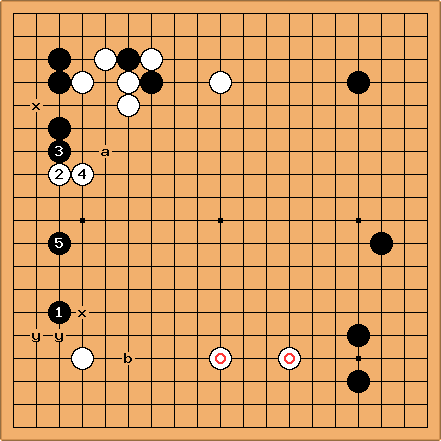 Herman Hiddema: Here's an idea. With the

exchange, black defends against the placement while making white heavy. Then with

, black denies white the possibility to make a base for his stones. After that, a and b are pretty much miai. If white defends the side by playing

at b, black will attack the heavy

group with a. But if white connects those heavy stones by playing a himself, then black can play a double approach against the corner at b, which also attack the marked stone

at all, but it does seem to solidly prevent white x. Thanks for pointing that out, Herman!

FredK: This diagram looks nice -- thanks for your thoughts. Here's a further question. Suppose W decides to tenuki after

at 5, making a pincer. This is probably a greedy overplay, but W has some strength along the bottom so W could probably stir up trouble. How should B respond, to keep things reasonably uncomplicated? Is the potential vulnerability of the two marked W stones, after a possible B play near b, still the deciding factor?

Herman Hiddema: Well, the first thing to keep in mind, is that the

exchange doe not gain white anything locally. So if you're gonna play

. That way, you can always choose what to do in the upper left corner later. Playing ther now is aji-keshi. Now on to your question. If white plays at the position of

, that is a pincer of

. black can then choose to jump out with a one point jump, or to take the corner with a move at 3-3. I personally would prefer to take the corner, but jumpin out also has a lot going for it (if after jump, white defends at b, you can then attack the pincer stone.

, then all black's stones on the left are low. The lower left corner is open, but white must be ok with that. Since white played the

stones high, presumably for influence, it seems to me a logical continuation for white is the attachment at x. White moves at y don't look attractive since black can treat

lightly as a forcing move and still undermine the lower side effectively. Just my 5 kyu guess though.