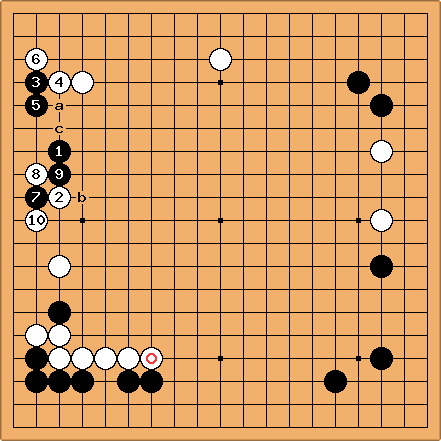 Tapir: In the upper right corner, I (Black) played according to the advice given at BQM recently. When white pushed in the lower left corner, I crawled once, but ignored the marked white stone next to play inside whites sphere of influence.

? Where else to play?

looks like an ideal extension, alternative white play might be at a (better direction?). I did not play a near approach because the pincer then looked much stronger to me. I played

with the intention to make a base while making white seem overconcentrated. After White cut with

, I was happy to sacrifice

to gain an outside forcing play at b, which helped a lot in running to the center. (While white continued to play second line plays to capture some of the black stones on the left.)

xela: On the contrary,

means that a white pincer is severe, as it's difficult to either settle or sacrifice the black stone. Personally I think

at c is just fine: if white pincers, black can invade at 3-3--the result is that black has all four corners. Since black already has a lot of cash in the bank, there's no need to be frightened of white's framework. 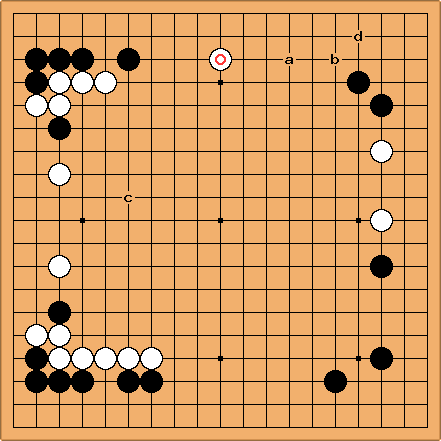 Tapir: This might be a possible outcome... Black is way ahead in territory, white has a big, but somehow overconcentrated (?) framework which should be reducable. The marked white stone looks hurted by the exchange. If it extends to a for a base, it only induces b which secures a big black corner.

(Even if i don't play for big frameworks these days, i'm still impressed and don't like my opponent to have one, one mistake during an invasion can lose the game so easily.)

What can/should white do now?

Dieter: I don't think the framework is overconcentrated. Rather it is too wide and too flat. If Black can reduce at c, there will come no big territory from the moyo.

Tapir: C is the answer to my question. I would have played deeper inside the framework. Too deep to be a reducing move, but still too high to make life easily. That's probably why I am impressed by frameworks. I play too deep and have to struggle for life or escape afterwards...

Andy Pierce: White owed black a move to stabilize her stones on the right side in response to black's approach(es!). Having left these stones weak, I think white is going to have a lot of trouble doing anything constructive with a moyo on the left side. Maybe white could do something useful with the stone on the top (which looks misplaced); I might try a probe with d to see if black will give up the corner, or the side. I think that black's plays have been more efficient than white's so far, making white's game difficult. 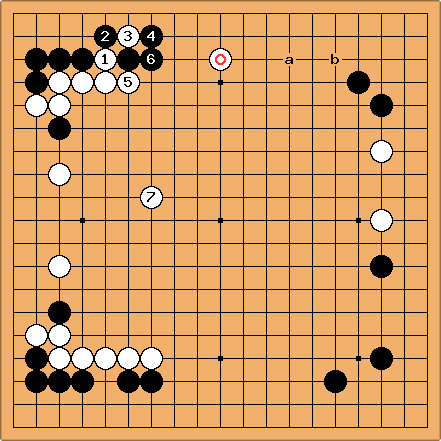 Dieter: I think somehow White has to build up his moyo. Still it looks like the more difficult way to keep balance.