Recently I (Gyom, 20k) ran accross this situation (as black). For a long time my opponent and I were confident in the life of the white group, and we played elsewhere. But to my surprise I finally found a move that killed it. The question is: did I miss something, or did my opponent do ?

Symplicity: I would be seriously concerned about the life of the white group, or be seriously considering it if could be killed. Actually, I would even read to see if it was dead even without having to play a move to kill.

Being confident in the life of such a group without reading it is a mistake. It is surrounded very strongly, and does not have any well-defined eyes, and the bottom of the base is vulnerable to black jumping in because black has stones on the first and second line, and white's lowest stone is on the third line.

Reading it right now, I'm not even sure that White can live moving first, but don't trust my reading too much.

Dieter: Indeed, most players who glance at this problem will say "White may live if he moves first, but it looks difficult". I see no way to live at first sight. 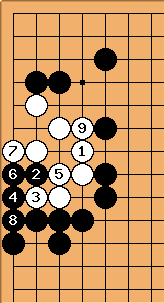 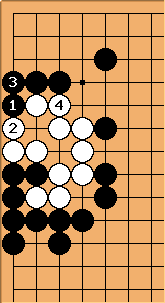 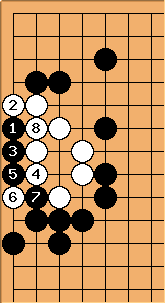 Bill: Black can also try to take the eye away this way. (If 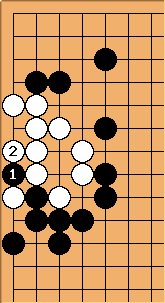 Bill: About finding the surprise kill, when I was around 5 kyu I was surprised how often I would get into a ko fight and make a ko threat to kill a group, only to find that it was not a threat at all, it actually killed the group! ;-) Life and death is worth study, and in actual play, you might try to kill groups, even if you think they are probably alive.

Gyom: Yes, thank you everyone for your help with the reading. For those interrested, the story is that the group was left unattended for quite a long time. At first, there were far less black stones, and it looked alive, but it became surrounded little by little. When I realized it (as black), I immediatly thought "Gee, I can kill this one", and I did. It seems from your reading that that my opponent should have done something far earlier: in this position, it would have been quite hard for him to live anyway (remember that we are both twenty-something kyu)

Thank you again for your fast answer.