I played the following on KGS as jeffguy [21k?]. A lot of my mistakes were careless. But this one I can't figure out precisely where I went wrong. 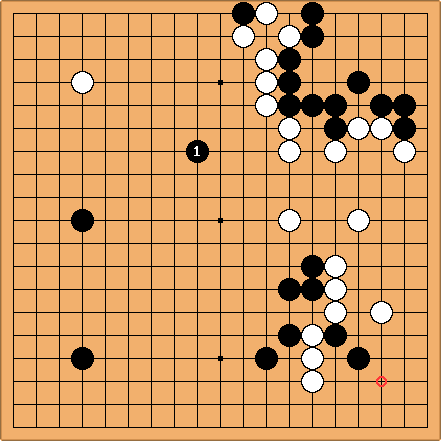 How should white respond? See below for the sequence I played. 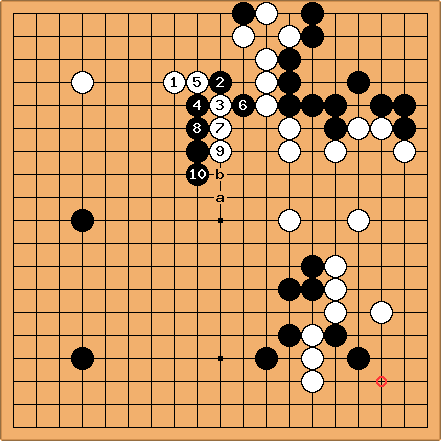 Followed by white jumping to a and black playing b (ouch!) Where did I go wrong? Which moves should I have changed?

Thanks in advance for your help!

JG I am about 5k, so consider my advice highly suspect. The bottom right corner in the initial position is unsettled, so White should play at the circled 3-3 point to prevent black living there. After that, White's secure territory is much greater than Black's secure territory. Black does have a very large framework extending from the bottom left, but it is open to invasion or reduction at several points. 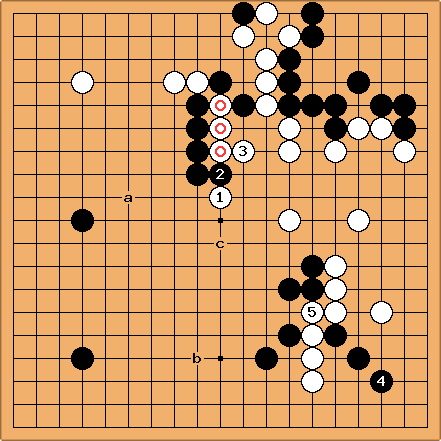 After the moves 1 to 9 in the previous diagram and 1 to 2 in this diagram, White should probably play 3 to save the three circled stones from capture.

White then has secure territory on the top edge as well as on the right. If black lives at 4, white can connect calmly at 5, which also threatens to push through and cut the black stones to its left. All White's stones are connected and the black framework is still wide open.

White has possible attacking moves somewhere around a or b, plus a reducing move at c. Black's next move cannot defend all those weaknesses at once. In other words, White has not yet made a losing mistake. What actually happened in the game?

Jeff: I'm embarrassed to say. My games are marked by careless mistakes that I could have easily corrected if I weren't so hasty. He had penetrated my one space jump, so on instinct I blocked. He then moved above my one space jump, placing my three-stone group in irrevocable atari. I saw his move coming immediately after making my block, and was tempted to request undo, but resisted the temptation.

In the end, I lost two other groups due to carelessness. Neither of us noticed that the bottom right was unsettled, so it became mine. And I generally played better than him, so my better position allowed me to win by ~100 points. I'm still determining my rank, though, so I probably did not have given enough handicap. 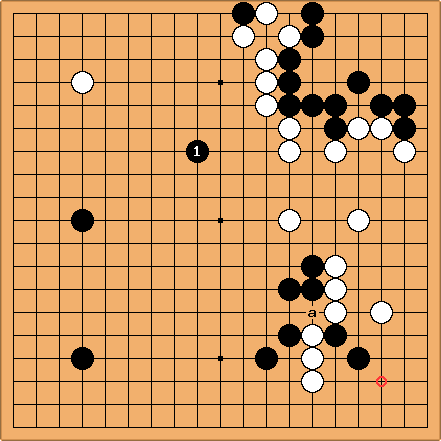 Hi JeffGuy. The answer is in the positional judgment. I'll give a few hints:

(For reference, there is one tactical issue I calculated: what happens after a black cut at a?)

Karl Knechtel: A brief tactical analysis... the White wall is strong, and Black is not making a real threat to it yet (he could have cut at a for example, since the ladder does not work).

is a reasonable response to defend the framework.

invades, ogeima away from the nearest support stone. This is unreasonable in context: we should be able to trap this stone easily.

is trying too hard, though: it offers Black the chance to start a fight. Try 4 at b instead: Black's stone should now be doomed with much less compensation. The basic idea is to push the target (

) towards your strong stones, while also restricting access to the centre. This kind of diagonal "pin" is commonly seen versus invasions of a 3-space, 3rd line extension. 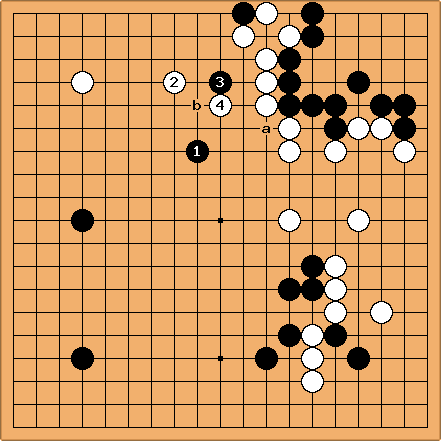 is a reasonable move": strongly disagree. The move is halfway between White's lone corner stone and the strong wall, and so is clearly misplaced. It is "defending a framework" and in my opinion shows a flawed kind of territory thinking. See my above remarks.