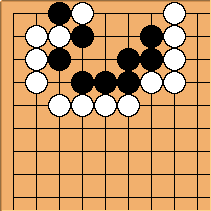 What puzzles me is not the problem, but rather the second fo the two correct answers shown in the book. 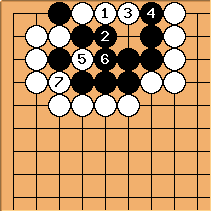 are sacrifice stones to wring out the eye space within the black group.

in this diagram is as funny as answer #2, isn't it death in gote? 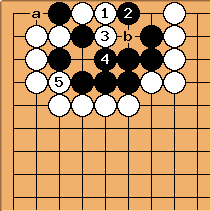 in place of capturing at a ? Seems to me that after

, Black can capture three white stones by playing at b. Why give up the three stones ?

Andrew Grant: Why not, as long as Black dies? White isn't actually losing points by letting Black capture the three stones. White gains three points by virtue of the fact that when the white stones come off the board the three points vacated become part of White's territory. The end result is the same.

Xanthus: What puzzles me is

in the solution. It seems to me like white can tenuki after

and black is still dead, am I missing something? 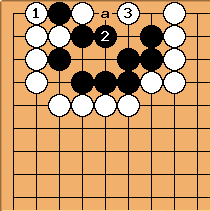 here is also a solution. If

kills. Looks like this problem is "多解失题", using FaYangLun's standards.

kokiri - agreed, and in such a situation, we prefer the solution that gives the opponent the fewest ko threats do we not? In which case what is best?