Creslin?18k: I'm a 18 kyu KGS player and I had a question for you guys. I was playing a game when a preemptive Kakari was made. Now I was wondering which Joseki to choose for my upper right corner. Tenuki looked good too, but my real question was if there isn't a black sente joseki, so I can either gain in the upper right corner or play in the lower left. 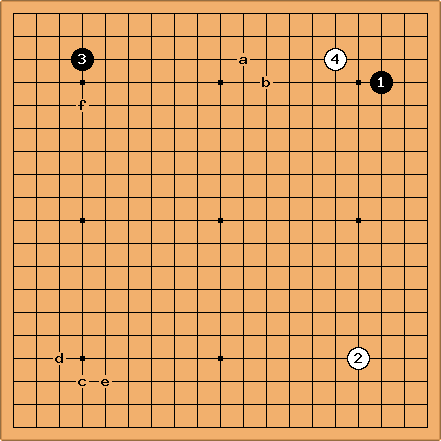 Bill: Tenuki is probably best. I like c in the bottom left corner to make a mukai komoku formation.

As for the top right corner, there is no joseki by which Black can gain an advantage in sente. The pattern on the top is not uncommon, particularly before the twentieth century. In those days a pincer at a was often played. You can see the good relation that pincer has with the stone in the top left corner. The pincer at b is a more modern alternative.

Dave: The only sure "sente joseki" is tenuki :-) In every other case, the question of who will end up with sente will be contested between Black and White. However, Black should not be in a hurry to rush off to the lower left. As the detail of the question above correctly states, Black wants to either gain an advantage in the upper right or get the first play in the lower left. This is a reasonable ambition.

Velobici: Tenuki. Black should play first in the last open corner. A 3-4 play creates miai for Black to get a corner enclosure either in the top left or the bottom left. Black d seems to invite White e. Perhaps this is one reason for Bill's suggestion to play at c and create mukai komoku. Yang Yilun has provided a relative value scale for opening moves. In this scale, playing first in an open corner has the highest value relative to all other non-urgent playes.

pwaldron: My database shows a few pro game hits for this position. The most common continuation (5 games of 6) was at f in the top left, presumably aiming at pincer. Each of these games was played without komi, however. The other continuation (by Cho Chikun, no less) was at c. This game was played with a 4.5 point komi.

The Black players won 5 games out of 6, although the small komi no doubt helps.

Bill: Let me say something about Bf. Yang's suggestion to play in the last open corner is, of course, a good one. However, it is also good to make a plan. Bf makes a simple plan of the miai kind, which leaves the opponent two alternatives while preparing for each. Whichever place White plays, Black plays in the other. They are miai. Before that, Black makes a play that works well with either alternative. 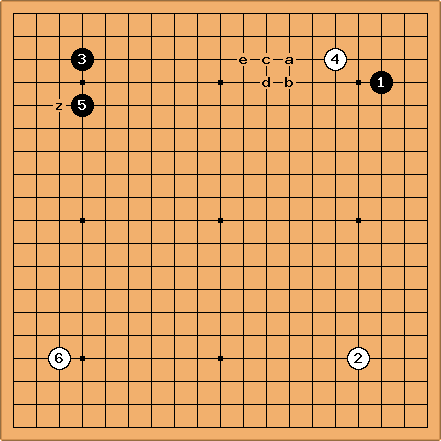 , if White plays 6 in the remaining corner, Black has a choice of pincers against

. Having a stone at

rather than z is better for this attack, since Black's anticipated framework will be closer to becoming territory. 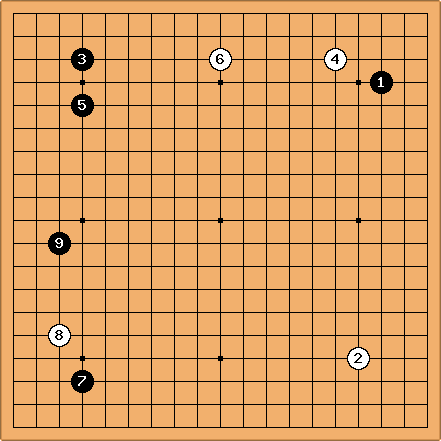 Bill: OTOH, if White makes an extension on the top side with

in the bottom left corner. Here, too, Black has a choice of pincers against

, has a good balance with

is the 'wrong' approach: it is a more obvious strategy to approach in the top left. White is still going to need to play there. I suggest 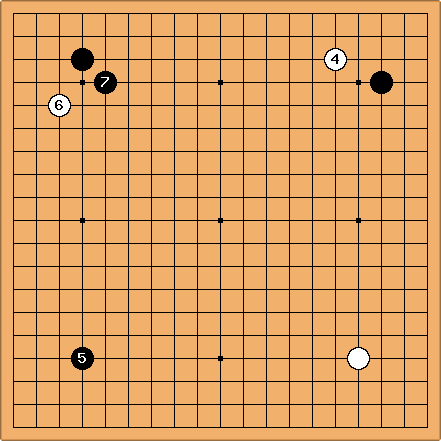 If this happens, the top side is a Shusaku opening; but the lower side is flipped over. This can't be an improvement for White, I believe.