ilan: In all the many games I have played in this type of situation, I would invariably play at 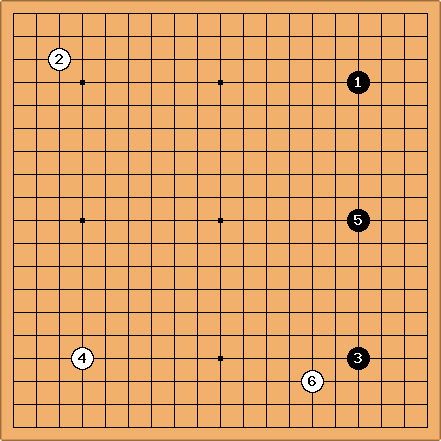 My reasoning was that

would back up future development on the bottom side, e.g., after 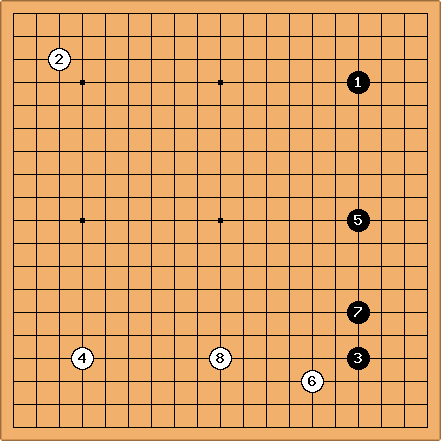 However, looking at the book on the 3-3 point by Cho Chikun, it seems that in this type of situation, White will play here 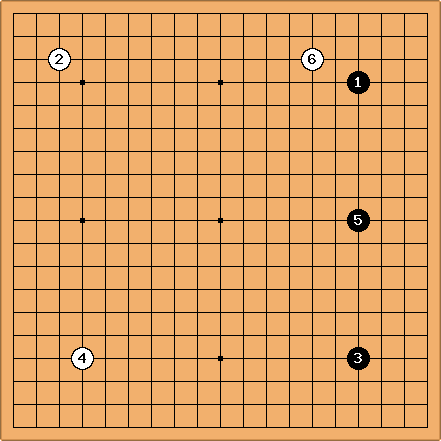 I couldn't really see why that would be better during my games, but after thinking about it, I wonder whether it's because Black can pincer the approach stone and fighting can break out on the whole side and the 3-3 stone in the corner is better able to handle pressure if Black gets strong near the top left during this fight. Is this correct? Thanks.

Alex Weldon: A low stone is exactly what you don't want if fighting breaks out. If you were going to start a fight, you'd prefer it to be on the lower side, where your hoshi stone could help out. However, you are probably right that the reason Cho chooses the top side has to do with a pincer.

Here's my best guess. When someone has a san-ren-sei position, they want to pincer approach moves. Extending in response to an approach makes them a bit overconcentrated on that side of the board. However, a san-san stone reduces the value of the adjoining sides, so here, it makes the top side less interesting, and reduces the value of a pincer.

Therefore, B has a tough decision to make. To pincer seems bad, because there's no territory to be made on the top side, but to extend would contradict his fuseki. Maybe tsuke-nobi would be his best option, as much as I loathe that joseki.

ilan: Thanks, what you say makes sense. By the way, the game Cho Chikun (White) vs. Otake Hideo went (position inverted)

Bob McGuigan: Besides the points already made it is worth noting that the upper side is a bigger space between the corners, so more valuable. 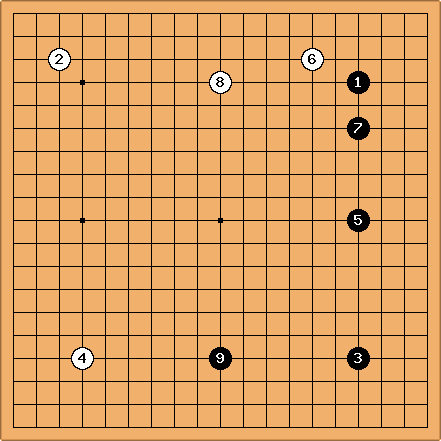 Dave: In looking at the historical record of professional usage this appears to be at least partly related to style. This fuseki is not current in professional play but in its day the leading proponents of approaching from the 3-3 stone seem to have been Cho Chikun and Rin Kaiho both of whom have strong territorial tendencies. At the same time the two players that approached from the 4-4 stone most often were Hashimoto Utaro and Kato Masao both of them better known as fighters. The approach from the 3-3 point was chosen more often by pros but had a worse record overall than the approach from the 4-4 point. For all of these players the combination of 3-3 and 4-4 was something they tried occasionally rather than a main line in their repertoire.

So the right answer (as in so many cases :-) is probably what fits your style?