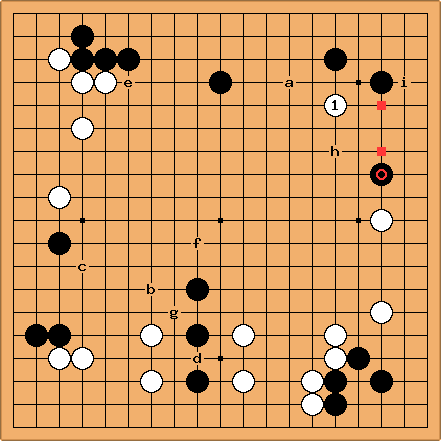 in a recent game and the continuation turned out badly after black responded with the keima at a. After looking at the game, I realized that because black's marked stone is a little closer to the shimari than usual, this reduction may be too deep (and also perhaps less urgent.) So I'd like some opinions on whether

is reasonable, and if so what a good continuation would be. If it's not, what are some better ideas for

, considering the whole board? Thanks!

JoelR: (KGS 7k) The lower left looks more urgent to me, because Black's bottom middle group is the weakest group on the board. I would play b as a double threat on that group and Black's group near c, or play c directly. Given your strength on both sides, d is playable, but I would hold that in reserve. Finally, the upper left looks unfinished: e is big for both sides.

Alex Weldon: For attacking the group on the lower side, I prefer boshi at f, possibly preceeded by a peep at g. The reason I hesitate about the peep is that it's conceivable that the peep on the other side might later turn out to be better, so perhaps it should be held in reserve.

, my style (I have no idea if it's right or not) would be to try to force B at both of the square-marked points, then play h (or one line below, depending on how B answers the contact moves) for light shape.

I agree that attacking the lower side group should come first, but I don't see anything inherently wrong with

. You do need to handle the moyo somehow, and it seems as good a way as any. You could also probe at i and then make a more shallow reduction.