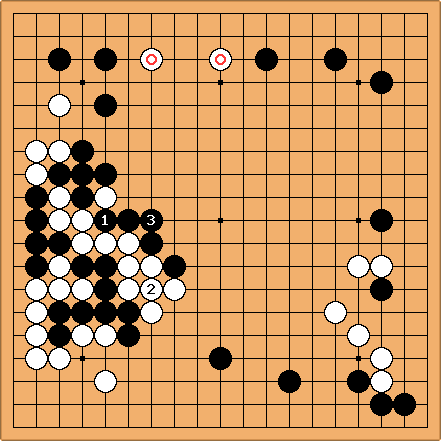 I found that position at net example6, where it is stated, that black can attack the

on a large scale.

Jesse: I think that page is saying that with

Klaus: Yes, I got that. That's why I am searching for a proper way to destroy any further white base now. 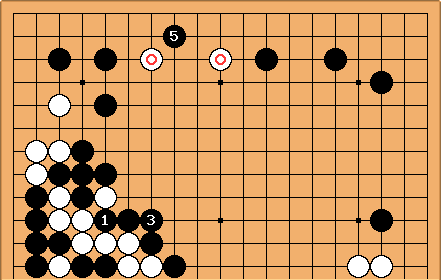 How should black begin that attack, if he gets the first move to do so?

might be an interesting way to remove white's base. It's my first impulse looking at the position. 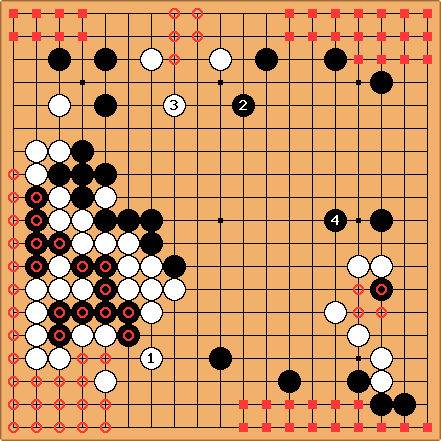 Andrew Grant: First, we should note that after

in the first diagram it's White's turn, not Black's. It isn't fair to give black two moves in a row so let's assume White has played

to capture the nine black stones. That gives White 50 points in the lower left. Add 5 points in the lower right, another 5 for the top group (which I assume will live), and another 5 for komi for a total of 65 points. Black has about 15 points in the lower right, 8 in the top left and 18 in the top right for a total of 41 points. Black will probably get a few more points next to his wall so let's say 45 points as a conservative estimate. Note that I haven't counted anything for Black on the right side; it isn't secure territory yet. But if Black can get more than 20 points here he will be ahead. That isn't very much, and it means Black has no need to make reckless attempts to kill White. A simple move like

will be sufficient, followed by

. Black is headed for a straightforward win.

Klaus: Wow! That is high class thinking! (At least from my lower point of view.) The more I hear stuff like that, the more I start to understand, why I am not at Dan level yet. Thanks! I tried to mark the points you are talking about, to make it even clearer to my kind of players. I am not sure, that I marked the points you have counted though: especially the two white 5-point groups can certainly not be marked that way for sure, of course.

Andrew Grant: Thanks for your appreciation. I've marked the points I counted - the total in the lower left is actually 53 points rather than my first rough estimate of 50. It makes no difference to the analysis.

(Actually, counting the score before deciding what to do shouldn't really be "high class thinking". Kageyama says in Lessons in the Fundamentals "One ought to think 'The score stands thus, so I'll play thus', adopting emergency measures or just plodding along as the case requires." Anyone can count, it just needs the will to actually decide to do it.)