Attacking and Defending MoyosPart 7 of the series: Mastering the Basics

Attacking and Defending Moyos by Rob van Zeijst and Richard Bozulich is volume 7 in the Mastering the Basics series.

PeterHB: Pleasingly, up to the usual high standard we have come to expect from Bozulich & van Zeijst.

I like the style of first having a descriptive section (Chap. 1) that explicitly explains what you are intended to learn, before the meat of the book, the problems (Chap. 3). This book has a feel that is similar to 501 Opening Problems, where both books use a large set of examples to ingrain the ability to spot a key turning point where either you take the crucial point, or your opponent does, stymieing your chances for the rest of the game. I like the learning style of using many problems to ensure you have really internalized the outlined principles. When learning tesuji and life & death first we understand them, then there is a process of hard-wiring them so that pattern recognition occurs quickly in games. The teaching style here is doing the same for when opportunities to create and destroy moyos occur.

The idea of making a move on the border of 2 moyos, so that yours grows, and your opponents reduces, appears strongly in both books. As a moyo specific book it covers more subtle themes, such as transferring a moyo from one part of the board to another, and building a moyo by attacking weak stones. This isn't a beginner's book, but rather a 9k into dan level book. Within its moyo theme, it expects you to have some previous experience of invasions, reductions, thickness and leaning attacks. This book tackles the difficult choices between these themes, about finding the right move at the right time. The opening joseki that have formed the shapes given are typical of my games and so difficulties illustrated are relevant to my games. The problems have the feel of having come from professional or near professional games. i.e. they have a genuine real game feel, rather than creations for a pedagogical point.

A particular strength is the frequent use of 3 or 4 solution diagrams with explanations of alternatives. I have found my wrong answers discussed amongst the solution diagrams, which is better than many other books single solution diagram that has left me with 'what if?' questions. The correct answers seem to go that extra necessary move further, where previously I have been left with questions. Problem 49 below is a nice illustration of this point.

Being practically free of typographical errors, using concise colloquial English, a normal firm binding, with a pleasant feel of the higher than average quality paper: overall forms a welcome combination. Sets a standard that some other go book publishers could learn from. 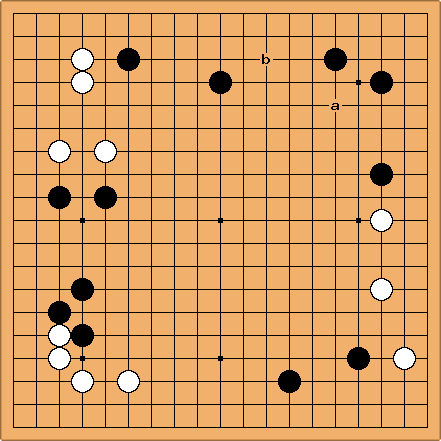 White must not allow Black to reinforce his moyo in the upper right. Should he reduce it by playing at A or B? 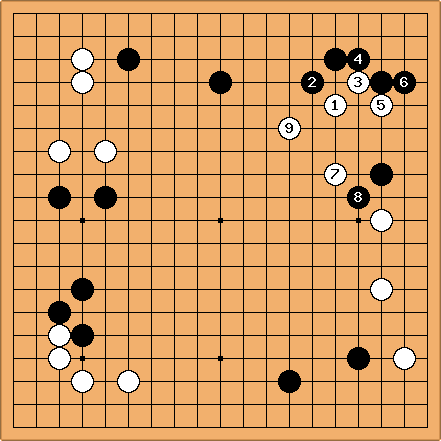 White should cap lightly with

. If Black defends the top with

, then jumps lightly to

. White is now threatening to invade the top or to attack Black's two stones on the right. 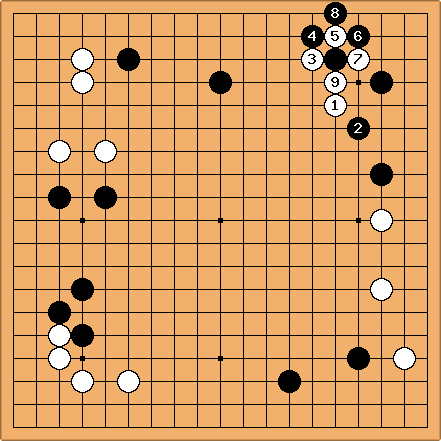 by defending the right side with

, White will attach and cut with

. After Black captures with 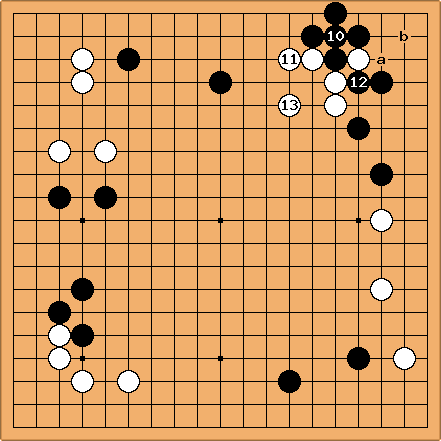 Black can't fight a ko, so he connects with

, Black must not omit

because of the aji of White A - Black

- White B, so White can make shape with

and aim to attack Black's two stones on the left. 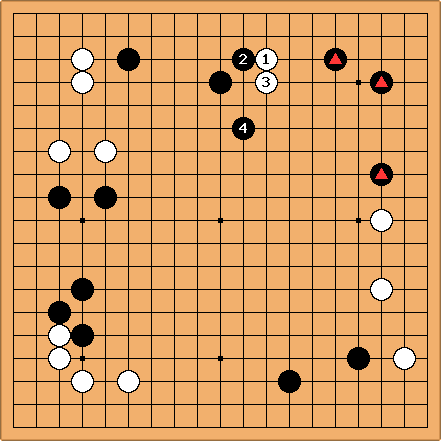 The invasion of White

violates Principle 10 (In Chap. 1 - Make a deep invasion only if you can end up with a secure group). After Black

, White must extend to

. His stones are now heavy. Black

is a powerful attack because of the strong marked stones on the right.