Not common as an English go term, but translates the Japanese ago. This means a play that compromises a diagonal, and from below 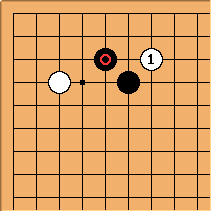 John Fairbairn The term ago is used for a move **below** an enemy kosumi formation. But the best authorities also limit ago to playing against a more substantial group, one that has a more obvious head and chin. The phrase ago wo tsuku (the usual usage) is sometimes replaced by boxing parlance: throw an uppercut.

Where the attacked group is rather undefined (a chinless wonder?) the word kobin (side locks) is normally preferred. Kado covers ago, kobin and kata (shoulder). For pedants, the character for ago in go means chin, not jaw. There is a separate character for jaw, but it's still pronounced ago!

Anyway, that is all just an excuse to introduce a nice story by Sakai Takeshi 9 dan.

"Around the time I was in the third grade of middle school, I studied go like crazy. I studied go when I got home from school about four o'clock till eleven at night. I finished my meals in five minutes and was loathe even to get up to go to the toilet. In the summer holidays I went to a study group in the morning and from around five in the afternoon I would study on my own. That being the way things were, whenever the teacher at school wrote something on the blackboard I always linked it with a go image. Even in maths, when the teacher put up equations I would see them as a go board and stones. I never did any homework. Those of us in that position had to stand up. Since I was always one of those not doing homework I would stand up first without waiting to be told. Once I stood up and the teacher came up to me and said, 'Sakai, why are you on your feet?' I said, 'I haven't done my homework.' He said, 'There wasn't any homework for today!' I wasn't able to become a pro before I left middle school, but once I left I did become pro at 16. I had just finished my preliminary games and I was on my way home feeling rather giddy, when I almost stepped in front of a car. My immediate reaction was to imagine being socked in the jaw with White 1 in the diagram, so much did I link everything to images of go."