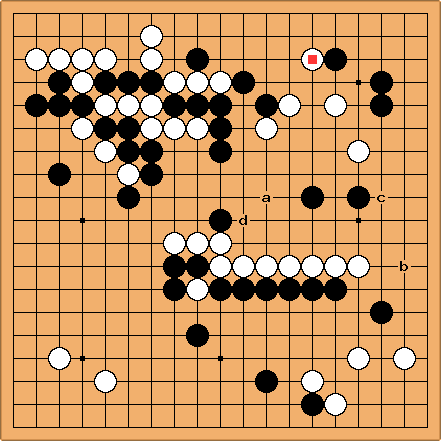 Dieter: This is the 4th game between Takao Shinji and Cho U (White) in the 60th Honinbo final. Takao leads by 3-0. I think he leads in this game as well. Black is rather thick on the outside and has a splitting attack going on on White's top right and centre group. White has territory in three corners, but in my opinion anyone who has two weak groups at mercy of a pro, is bound to lose, even a pro.

Alex: I'm not so sure. I wouldn't be comfortable taking White in this game, it's true, but there are a couple of things in White's favour.

First of all, Cho is known for his shinogi. This doesn't seem like a situation that came out of nowhere, so he must have seen it coming and decided he could handle it. He's also a bit overconfident at times, so he may be wrong, but I doubt he feels he has a losing game at the moment.

Secondly, there seem to be several moves White has at his disposal to settle the top side group, especially since Black must play at or around a now. The question, then, is whether White's middle group can take care of itself. It looks to be in very serious danger, but big dragons have a proverbial tendency to live. For instance, White can threaten to link up with b, then attach and crosscut at c. I haven't done any real reading, but there seems to be a chance for at least an eye in sente around there, and a second eye in gote at d.

Bob McGuigan: In the position given above it is Black's move, which has actually been played as the sealed move for the first day's play. White's last move was

on the upper side.

) showing how the fight started: 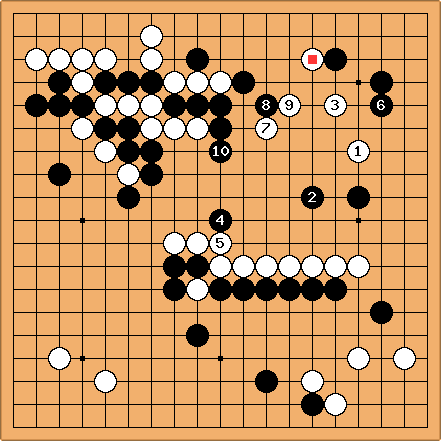 George Caplan Well, Cho handled his groups and won the game. That does not mean he was not in a tight spot, mistakes may have been made. I am diagram challenged, so I will not try to show the rest of the game, which should be a new page for day 2.

If someone does, however, here is where I believe Shinji went wrong. I think it was a mistake to save 5 stones that he rescued shortly after the lunch break. The only purpose the stones served was to separate White, but White linked in the fight anyway. Black could have, I think, let the stones go, and take some profit on the right side, then switch to the left. Instead, Black saved his stones, disputed the right territory and then switched to the left. The problem was, when Cho started the fight on the left, Shinji had to deal with the aji of his decision to rescue the 5 stones. I think this helped Cho win the fight.

I know this is annoying without a diagram, I hope someone fixes that issue and I can hear some comments on the above thoughts. It was a pretty interesting game.