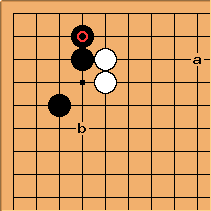 When Black plays the low

stone, it is a well-known plan in pro games for White to ignore it and play elsewhere.

Black's next play here will be at or near a or b, depending on the importance of the sides. Of course if Black b and White a, White hasn't suffered much damage. 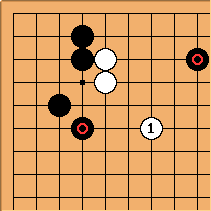 White might in fact wait until Black has played both

stones before reacting. Coming out with the diagonal jump 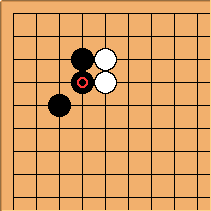 On the other hand one doesn't see White play tenuki after 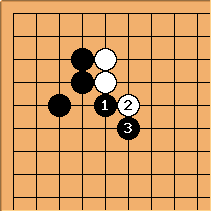 The double hane of

is just too good - White may never recover from this loss of good shape and influence. 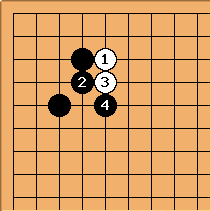 Here is a tewari analysis of the previous diagram. Starting from a black small low enclosure,

is not the most usual, but also not abnormal.

is a standard answer, but for white to next exchange

is a big loss, making her stone heavy and allowing black excellent shape with

while white's own position is hardly helped.[1] 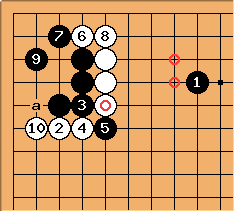 There are some pro games in which

is played as a pincer, as shown, or at one of the marked points. The sequence from

and then Black a is standard. After that White must handle two weak groups in a cross-cut fight. 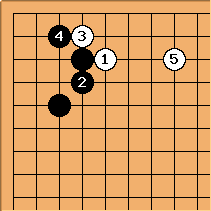 White's ordinary moves in this situation are