I have been recently studying Gu Li's games. What strikes me is his fresh approach to fuseki. In most of his games, he likes NOT to complete the standard joseki's. Lately i have started doing the same in my own games. I have a feeling my strength has increased at least a stone because of this. These "incomplete" joseki's most commonly result in an exciting fighting games. I feel as if it has reinvigourated my playing. Anybody has similar experience? I think that we will see many other professionals imitating Gu Li's unique style in the near future.

Have you studied Go Seigen's games? I have and although I cannot claim to really understand what they're doing, there is a similarity in the flow of there games.

Incidentally, "completing joseki" is one of the poorer ways of playing the game, so good riddance!

I am somewhat used to this way of playing, too, and believe to have improved my performance thereby. However, that may as well be just a consequence of my opponents not being so familiar with exploiting those unsettled situations. I guess the point is not only to keep the urgency of my tenukis higher than the one of the omitted joseki moves, but as with "explicit" furikawari, to do this in a way that globally really gives an advantage.

Well i can think of two reasons for not completing joseki's:

1. It makes one's play much more flexible. Flexibility is the key to good go.

2. It leads to lots of fighting. So you get alot of chance to tune your fighting/reading skills!

I presonally dont think that Gu Li has some "master plan" from the beginning (as Dieter may or may not be implying.) It's just that he is a very flexible player and he knows that whatever the opponent does, he can find a good response. 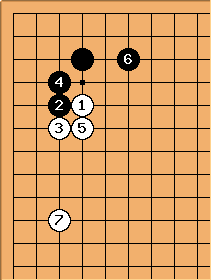 What does it mean not to complete a joseki? Is this a complete joseki?