Forum for Shortage of Liberties 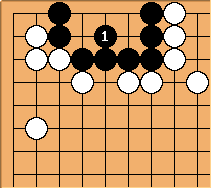 The correct play for black is this one, an example of the Go Proverb "The Comb Formation is Alive." If possible, he can revisit these cuts later for an attack, now that his life is ensured.

unkx80: Actually, it might be better to just play elsewhere. Black is already alive even without

Ah! You are right. A white attack at

will only succeed if one of the black groups two dame is filled. 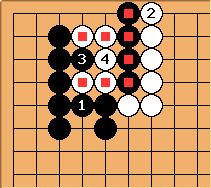 I can't seem to find a solution for black, even if black makes the first move. If there is one, lets see it... The example here seems to be the one in which back loses the least and builds some towards the center. If white moves, first, it is trivial that white will win the capturing race.

unkx80: Yes, see the bamboo joint may be short of liberties, example 2.