(moved from message board) 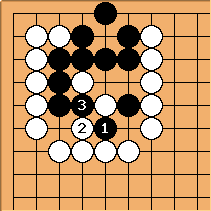 What is the English equivalent of 相思断? This Chinese go term appears in the answer commentary to problem 377 of Weiqi Rapid Drill 800 Problems. Tempted to call it a cross cut based upon the usage of that term in Tesuji page 24ff. 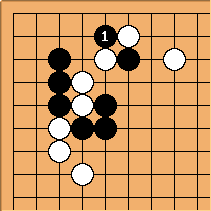 unkx80: I don't have Tesuji, but I can say that the typical usage of 相思断 refers to the crosscut tesuji like

as shown in this diagram.

Herman Hiddema: Which would mean it refers to the double crosscut to connect technique, I assume?

Is there a difference between 扭断 and 相思断 ? If there is, in what situation would one use 扭断 in place of 相思断 and vice versa ?

For what I've seen here, 扭断 seems to refer to cross-cuts in general, while 相思断 refers to the specific usage as a tesuji to connect.

This would be similar to the use of 立 (lì) for a descent (or sagari), with the terminology 金鸡独立 (jīn jī dú lì) for a specific tesuji employing this move, the Golden Chicken Standing on One Leg.