Zone Press Park English translation (by Robert J. Terry) of a book by O Meien, published by Hinoki Press. ISBN: 978-0-9788874-7. The book is volume six of the proposed seven volume The Heart of Go Discovery Series.

Calvin: This is probably the most unusual go book I've ever read. Most of the text is presented as 2-way or 3-way conversations between O Meien (the author of the book), the writer, and some kind of assistant referred to as "Rookie." The book is very heavy on text and short on diagrams. The text is mostly a single running joke regarding O Meien's obsession with consuming large portions of expensive food (paid for by the editor-in-chief's expense account), mixed with a tendency to avoid the writer's questions or give cryptic answers. I suppose some people might find this entertaining, but for me the novelty wore off after a couple of pages.

That being said, there are some interesting philosophical ideas in the book. O Meien discusses the concepts he calls "infinite" vs. "finite" go. A position in go is "finite" if it's possible for the player to find the best move through reading. It's when the game is constrained and the possibilities are limited. It is clear he doesn't like this, and his technique of the "zone press" (a term borrowed from Japanese soccer) is designed to avoid it, and push the game into a state he calls "infinite," meaning a position where it is not clear to either player what the best move is, but there is nevertheless a pressure for his opponent to do something to reduce the dominance of his "number one zone", which is the area with the most potential on the board. My feeling from his examples is that in CGT terms, you might say that he raises the temperature. This isn't just about building the biggest moyo---it's more complicated than that and involves the relative strength of groups as well. In some sense the player with the number one zone can fight with advantage in that zone in a way that can control the game. The zones change throughout the game, and the idea of a "press" is to affect the current number one zone. The strongest feeling, he contends, is when one can arrange for a chain of zone presses. But this is rare because the opponent resists, and so there aren't many good examples.

If you are seeking to learn the secrets behind his meienisms, you'll be disappointed; a couple are mentioned, but I think one can learn as much from just studying his games without commentary. But it is inspiring that he is humble enough to say frequently that most professionals would not play the moves he plays, but that they are the ones that are consistent with his way of thinking about the game. The moves other professionals play may not be bad or may even be better, but in some sense the are usually based on "finite" go and therefore not part of his way of thinking about the game. Like his teacher, Go Seigen, he plays his own game, and that is to be admired.

This is certainly not a necessary book, but if you are a fan of O Meien, it is a novelty and an opportunity to peek into the mind of a very creative professional Go player.

He recognizes aboslutely enormous sector lines, such as the relationships in this diagram: 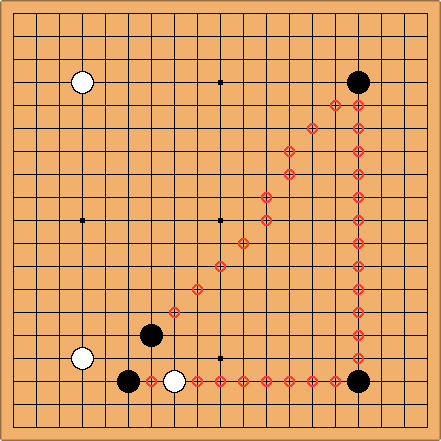