This post is a reflection on my thoughts over the years on the 4-4 slide vs. AI attachment joseki. As a disclaimer, I almost exclusively play the AI attachment in my own games (2-3k OGS), but I'm a rather firm believer that the slide is a better move for high sdk or ddk players at the amateur level of play. I'll go through this post and hopefully explain why.

I think when I was 8-9 kyu, it was hard for me to imagine how to AI attachment after the 4-4 point small knight approach is a "good" result for Black (Dia 1). At the time, I had just picked up go again after years of not playing, and I watched all of the relevant Youtube videos on the subject that I could find. From a DDK's perspective, there were only two main variations (Dia 2) and (Dia 3) that I memorized, but neither result seemed very satisfying. In Dia 2, I knew that Black could push up at a, but that that was the complicated variation that Cho Yeonwoo did not recommend for beginners, so I mentally committed to never play it.

Many people told me that Dia 2 was the modern version of Dia 4, which many of us took for granted the notion that Dia 2 is somehow "better" than Dia 4.

Is that really the case, though?

Even as a high sdk, I questioned this sentiment. From my eyes, Dia 4 seemed better for Black than Dia 2. In both positions, Black is settled with a stable base, but Dia 2 has obvious shortcomings. Black has less influence in Dia 2, has three stones on the line of defeat, and the

stone (Dia 2) is one space narrower than the

stone (Dia 4). A child's reasoning is thus the traditional joseki clearly looks better for Black, if we solely compare the final state of these two variations.

On an empty board played as a parallel fuseki, AI thinks Dia 4 is almost always better than Dia 2 no matter which direction the joseki is played. It is a small marginal difference, but this is hardly any more of a score difference between the traditional slide and AI attach.

, in fact many weaker players have failed to recognize that the

one-space extension is perhaps even worse -- assuming of course that we take AI scores to be the grand oracle and authority on all matters of goodness (sarcasm, of course).

move is submissive and too conservative. Currently, pushing up with a to initiate the complicated variation is the only move that professionals will consider, and the AI evaluation is favorable for black. It could be argued that the complicated variation at a is the AI's primary reason why the attachment is "good", as sometimes White will push with

(Dia 3) to prevent Black from obtaining such an intimidating moyo building move.

If we live in a world where the

push at a doesn't exist, it's entirely possible that the AI would no longer consider the attachment to be a good move. Perhaps the only way to prove this is to train an AI where the move at a is banned from the neutral network?

Regardless, my opinion is that it's very misguided for a kyu player to choose the AI attachment because they think it's "better". The final position with the

one-space jump isn't "better" than than the traditional slide joseki's final position. Black shouldn't be satisfied with such a conservative position on the side, and strong players aspire to take a position with greater potential. AI play the attachment in the early opening because the complex push variation is their primary desire.

I've often heard that the slide is "bad" because White can tenuki.

For a long time, I held the opinion that the slide is good if you think that your opponent will respond locally. In kyu games, weaker players virtually always respond, and even if they don't respond at the 3-3, it's extremely likely that they'll mistime the appropriate time to respond (or even worse respond with the pincer from the outside when it's wrong to do so). In amateur games, my personal evaluation of the slide is that it favors Black more than White overall.

In recent months though, I've been re-evaluating this premise that "slide is bad because White can tenuki".

In principle, there is nothing wrong with the fact that Black loses sente. Black always expects to lose sente whenever Black approaches a 4-4 point, and completing the rest of the AI attachment joseki is also gote. Losing sente is not the appropriate argument to make with respect to this situation.

In my opinion, the more accurate response is rather that Black doesn't have an amazing followup once White chooses to tenuki. In fact, neither players have an especially interesting response, and the position is mutually miai for both players. Given that it's miai, there's really no benefit or urgency to address it immediately, and often times we can choose a better response once we acquire more information on the rest of the board. 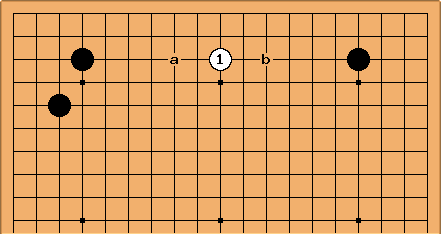 For example, imagine White split the side after a certain fuseki opening. Should Black check the extension from the right side or the left side? Actually, the AI answer is neither -- AI thinks Black should tenuki because both are miai, and White has no real threatening response regardless of what move is played. Playing immediately is suboptimal because maybe Black would prefer to play a different way once there are more stones on the board. White has a satisfactory result regardless if Black goes from the left or right, but it's also Black's privilege to chose which side.