(Dieter: moved from unconditional life, please check for missing references, in particular if references to diagrams are still as intended)

Charles Matthews The point here would be that 'alive', the status of a group, isn't the same as 'no possible threats' against it', as in 'no ko threats ever possible'. Absolutely alive expresses the idea better, perhaps.

Charles But that's not standard usage.

Bill: I believe that it is standard English usage of unconditional.

Zook: It depends, Bill. There are conditions under which the defender isn't alive which you may not have thought of:

English is of little value here. What people use to call unconditional, is what matters.

Bill: Zook, you caught me while I was editing myself. Here is what I intended to add. And you are right. I was making certain assumptions, which I think the following makes clear.

(A bit later.) I think that we can say the following:

Charles No, it is the case that (outside the narrow discussion of Benson's algorithm) unconditional life refers to a status - which may change indeed.

Bill: Well, as I originally said, I have used the word in this sense without reference to Benson's algorithm. Also, taking a look at the status page, its context seems to be life and death problems. In addition, it refers to being alive, not unconditionally alive. The classification scheme (alive, dead, unsettled) is not fine-grained.

Charles No - the first section of the page isn't about life and death. The second, which is, refers back to the first.

Anyway, I think Benson shouldn't be on a Beginner page, in any form. I think unconditional life should alias to alive, and the discussion be carried out there.

Bill: I agree about Benson not being on a Beginner page, and have changed the difficulty level. As for aliasing to alive, this whole discussion is about the difference between being alive and being unconditionally alive.

Anyway, beginners quickly understand unconditional life, as in the first diagram on this page. It's life, as in the second diagram, that requires additional explanation.

Charles Oh Bill - how many beginners do you see in a year? Can you take the point that some of us are at the sharp end of teaching, and regard this sort of comment as unrealistic? The Benson definition, as 'no ko threats now or ever', is well out of the mainstream. It's just a theory/computing concept.

We may not use the term, unconditional life, but I, anyway, always explain that there is no way that White can capture the Black group in Diagram 1. In addition, I do it exactly as outlined in the definition at the top of this page. I let White play with no play by Black. I suspect that you do, too.

As for Diagram 2, how do you explain that the Black group is alive? I say that if White plays at b or c, Black plays the other one, to produce a group that White cannot capture. If beginners do not understand unconditional life, they cannot understand life.

Charles One can demonstrate Diagram 1, without introducing any definition that distinguishes these cases of life: 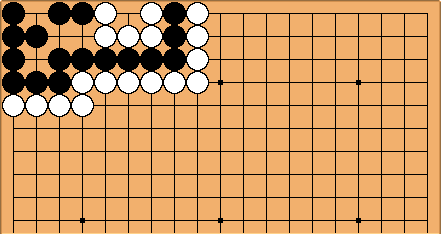 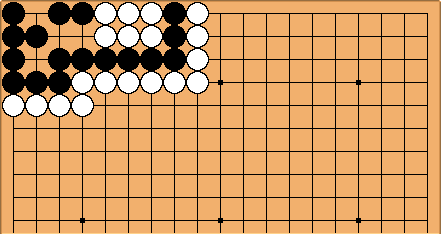 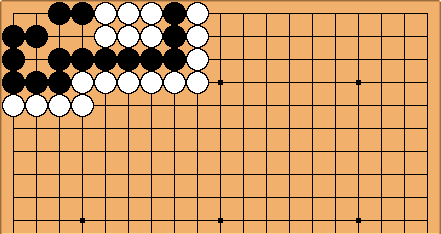 Bill: No, but that is not what I am claiming. We both agree that you do not get into such questions with beginners.

Charles You said above that beginners 'quickly understand unconditional life'. I can't agree. It is a remarkable beginner who understands any of this. That's why I posted the three diagrams.

Bill: There are levels of understanding, Charles. I certainly cannot solve all life and death problems, but that does not mean that I do not understand the concept of life. If a beginner understands that there is no way that White can capture the Black group in the first diagram, and that Black does not have to defend it, then she has an understanding of the concept of unconditional life. That does not mean that she has a level of understanding that would allow her to decide complex positions. And that is not what I claimed.

But neither do you (neither do I, anyway) simply say that the corner group is alive because it has two eyes. I justify that by pointing out that the opponent cannot capture it, even with no defense. I do not introduce a new term and define it. Why bother? But I do teach the concept, which explains the new in terms of the more familiar.

Seriously, Charles, do you just say that the group has two eyes, and that makes it alive, with no further explanation? Do you not make the point that no further defense is necessary?

Charles Firstly, I'd always vary the lesson according to the student. Today, for example, I was teaching in a cognitive therapy group for people recovering from head injuries. Last Friday a nine-year-old. On Monday university students.

Secondly I think being minimalist with explanations is good, for most people. Diagram 1 shows a position terminal for good play. I'm much more likely to emphasise the mistake of filling in an eye, than to introduce an 'alive' concept. I would use the word 'safe'; that's a way of explaining the primary object of the game (make territory in your safe groups). So my point from Diagram 1 is typically 'groups can be safe' rather than 'you don't need to defend this group further', which is a different kind of point that comes later (as in the three eyes better than two syndrome).

Evand: How about we use the term invincible to refer to a group which can never be killed by the opponent, even given multiple consecutive plays? That seems to be clear and obvious, and not in use elsewhere. Then unconditional life can be either ignored as being ambiguous, or used for a problem to mean alive without ko, or whatever.

RafaelCaetano: I don't think we can choose to use another term. The term unconditionally alive is already in use in both senses. But, as Charles said, Benson's usage is usually restricted to theoretical or go programming contexts. Considering the different contexts, it's hard to confuse them; unless you bring it to the Wiki, where things get easily out of context.

I can't see why beginners (or advanced players, for that matter) have to understand Benson's unconditionally alive to understand life. How would it help in a case like below?

Bill: Rafael, beginners do not have to understand Benson's algorithm to understand life. But they do have to understand that there are groups that cannot be captured by the opponent, even without defense. They do not have to differentiate every case, because, as we know, it is extremely unlikely that a group like the one above will be captured. What they do have to understand about the Black group above, if the question even comes up, is that it may be defended (if need be) by making a group that is unconditionally alive. The concept of (independent, defensible) life depends upon the ability of the defender to make a group that he does not have to defend. That is why the concept of unconditional life is basic.

Charles Given the precedent here of ko nomenclature, I don't see why the 'Benson' use has to be recognised on SL. We can easily use another term, just noting the usage in an appropriate place .

Bill: Aside from Robert's definition above, there are at least two more non-Benson definitions of unconditional life here on SL.

See Landman's and Knechtel's definitions on Formal Definitions of Eye. 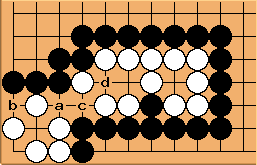 Both of the White groups are alive, in that they cannot be captured by alternating play. If Black plays a, the left White group lives at b, or the right White group lives by playing at c (to prevent Black d). However, a is a double threat for Black; after he plays it, both of the White groups are killable, and White can only save one of them. Thus the notion of "alive" based on alternating play is incomplete without discussing the possibility of external threats or moves in sente. Alternate play only also cannot give the CGT value of a group's status, which may in general require looking at an arbitrary number of moves in a row by either player.

[Bill:] Each of White's groups is alive, but not both.

TwentyK: Well than main problem calling seki unconditional life is that it leaves some confusion as seki is inferior to living with points, but of course it depends on the situation. For example, if I said a problem was Unconditionally alive then the question arises is it seki or is it alive with point see my dilemma. Alas go is about Territory so to say it does not matter is kinda of a negative comment. Well anyways thank for input Bill. I'm still kinda against calling seki a unconditional life but I'm not saying seki is not alive it is alive just that maybe unconditionally alive should be more defined as alive with points. Because we all know what alive is but then whats the point of defining it as Unconditionally alive.

RobertJasiek: I do not mind if someone finds a better phrase instead of "two-eye-alive" but "alive with points" is worse because there are, for example area scoring, rulesets where sekis consist of points (and can sometimes even have a non-zero score modulo the sum of numbers of involved stones). Therefore "alive with points" does not express at all that sekis are excluded. - My suggestion is: "independent life".

MrTenuki: I took the liberty of adding a note on "alive with points" and introducing "independent life" as well.

Bill: I also use "independent life" for life that is not seki. That fits well with another phrase for seki, mutual life. :)

RobertJasiek: I really do think that independent life (in contrast to unconditional life) is USUALLY used in the explicit or implied two-eye-formation meaning. I recall many such occurrences in literature while I have a hard to time recall any where independent life was used in a seki meaning. It is illogical: In a seki, life is NOT independent but depends on coexistence with the opposing group's life! So claiming "sometimes" as the frequency for the meaning with the implied two-eye-formation is a very great understatement.

Herman: Yes, I agree, but that was not the issue. The sometimes/usually in the footnote in this case refers to how often the term is used, not how often is has that meaning. The term "Independent life" is not used very often, being a specialized term, so it is used only "sometimes".