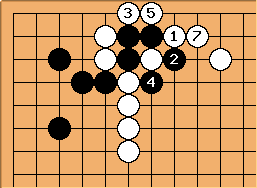 are the twirl[1], a variation of the squeeze tesuji performed on the first line. Japanese: guru-guru mawashi (spin round and round).

Bill: I am not sure that this is guruguru mawashi.

maruseru: SpiralLadder says the requirements for guruguru mawashi are throw-in, squeeze and ladder. The situation here is missing the ladder. It rather looks like watari (connecting underneath). If the Black stones are swallowed whole, e.g., when White is strong outside, I've seen nomikomi (swallow, gulp) used in the Tesuji Daijiten.

connects, in this case White connects up with

, leaving Black with a floating clump. In other cases, White may be able to capture Black entirely.

johnf 'twirl' on its own sounds silly to me as a native speaker. It has common but irrelevant connotations (e.g. "give us a twirl" or a reference to a well-known chocolate bar). Also, if the Japanese usage is being followed, there must be a ladder, and there must be a rotation (guru-guru is round and round). There is also a strong hint in the Japanese of a judo-like move where to turn the body quickly to throw the opponent, so squeeze or wrap sounds wrong. The tactic need not be on the edge, so the edge-wrap and watari ideas don't apply. The sharp, quick turn knocks out terms such as spiral, revolving, gyrating, etc.

If twirl is insisted on as part of the package I'd suggest 'twirling ladder'.

However, I think the ideal, if we are putting it into English, is to put it into proper idiomatic phrase-wide English rather than an item on a vocabulary list. So, for example, we might say "The result is that White has spun Black round? into a ladder." Much better than the "The result is a twirl."

tderz: We should be able to find a more spectacular example for guru-guru mawashi. 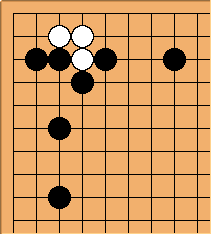 dnerra: Here is a variant of this tesuji that I recently missed in one my games.

Answer to appear on a separate page.