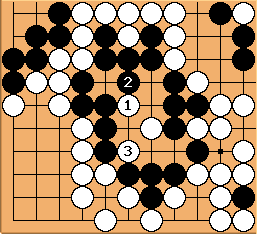 tderz: I have to admit, that this simple - even more obvious - move did not occur to me during the game.
I was in byoyomi, just knew 'something has to work here' and gambled. 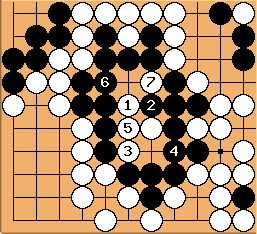 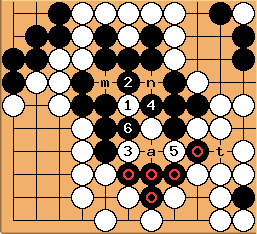 after W captures 4 stones with

Correction by Bill:
White made 11 points by capturing in total 5

next t and t itself have to be added)

which White snatched away (in Gote).[1]

W cannot avoid B's life in either variant and
Black has nothing to chose either (except life or death).

This variation (here, dia. 30) is better than that of dia. 100,
because Black has to give up the stone to the right of

(compensates for that White catches B 5 stones in dia. 100 below),
which then additionally gains the point t for White.. 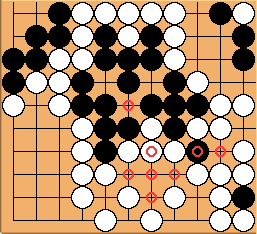 tderz: Yes, thanks Bill, the 3 points around

have to be added to the score of White. (During writing I thought once about that, than forgot it over all these diagrams).
My scoring however takes a maximum territory of 10 for Black and zero for White as reference. 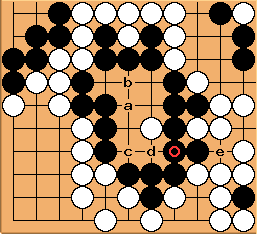 tderz: Maximum Territory for Black
After a connection at

,
Black would have had 10 points (thanks to Bill for pointing that out),
as a White threat at a
could be answered safely by black b even if liberty e is gone.
(White c? -> black d). 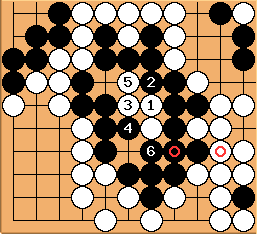 Bill: I believe that Black has 10 points after

. He does not need a protective play after White fills at

are miai.) Bill: That makes the original position worth 1.5 (for Black), and a gote here gains 8.5 points. I expect that this play was sitting around for some time. :-)

tderz: I never meant that Black needs protective play in dia.[32] above, even if liberty e is taken.
Only if e and a are both taken, than Black has to react and still can live with b.
This should have been clear from my text. I am simply bad at counting,even until 10.

eliminates the immediate snapback threat, I thought it was worth showing this variation, no matter what you had in mind. :-) 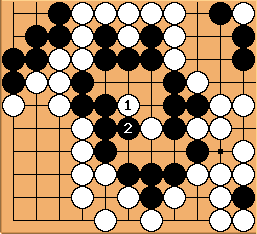 nando: I must be missing something (again): what is the sequence after this

tderz: something similar to dia. [30] occurs: 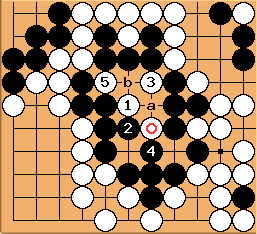 White must go for the snapback with

,
Black has time to atari

,
White can complete the atari-snapback with

,
yet cannot connect at a in order to kill (damezumari),
only capture with b.
Hence, Black lives.

My question to you and Tamsin: 'What's best?'

instead, I still can't see the light... Must be a blindspot of mine. 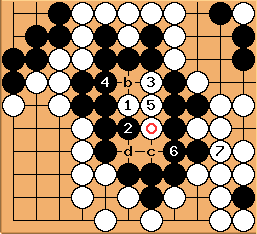 tderz: Aaah so-desne ... get your free experience of ...
see yourself.
Black cannot give atari at b for a living shape, neither squeeze at c (auto-atari).
In fact, a large double-snapback at d threatens.
However, if Black defends against the snapback,
White kills by making bulky-5 with atari at b.
Black is doomed either way.

nando: Thanks. Indeed, a blindspot of mine ( 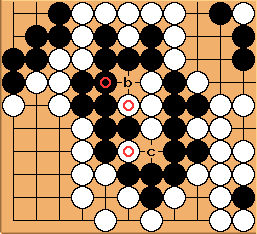 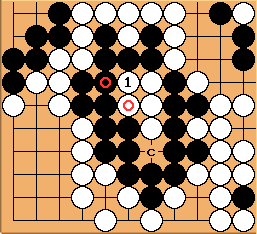 tderz: Tasmin, that looks very good to me for the 1st move! How much time did you need for this? I move this to the solution page, however, could you please reply to the questions below and edit for the best sequence for both?

How would you then answer the question:

(locally, as Black will lose the game anyway if he loses already only some points)

Tamsin: Hi, the move I gave was the second one I considered, as initially I looked at 3 in Diagram 10. It took me about a minute to see my suggested answer. Normally I pretty quick at spotting initial moves, but I'm trying to train myself to read through variations properly.

I'd say it was likely a L and D problem. Certainly, I would want to read it out during a game so that I could know its status and then act accordingly: if White cannot kill for now, she may be able to use the aji.

I don't know yet the best moves for both. Reading all variations is much harder than spotting a likely killing move and playing it on a "percentage" :-)

Tamsin, I completely agree with you about the complexity of complete reading and spotting vital points.
Actually, I started with

in dia.[10] as first move (sequence as in dia. [90] below).
In the game, where I was already in byoyomi.
I was quite shocked when my colleague/friend (2k) gave me

in [10] as answer when I posed the position to him, because I thought that I 'missed the kill'.
However, now I am convinced that W cannot kill Black (at best play for both), hence it's an endgame involving L&D-problem. (the answer to my question) 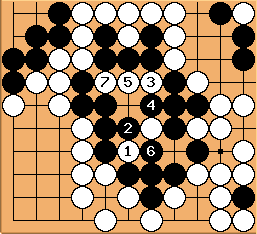 Bill: C'etait moi. I have been posting on this page anonymously. I recently installed Linux, and lost my cookies, which would have identified me on SL. 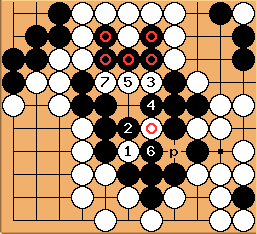 are worth 10 points.
The net result is thus
Maximum Territory for Black minus Black's territory loss minus loss by

After correction by Bill

This is indeed 1 point inferior than the 16 points in diagrams[30]-[33] above as pointed out by Bill.
As both variations end in White's gote, they are directly comparable.

Before correction by Bill 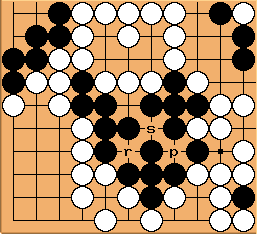 tderz: This is why I consider this the best solution.
White could not hamper Black's life,
yet Black cannot avoid the capture of 5 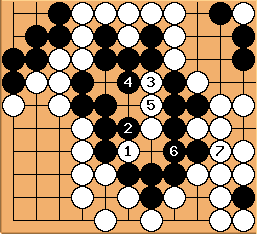 tderz: these were sequences (equiv. to dia.[60])which I 'saw' during the game. 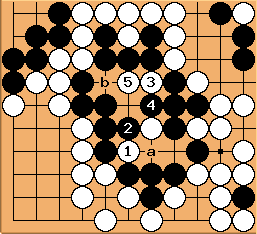 tderz: Black's damezumari, Black a - White b has to follow. 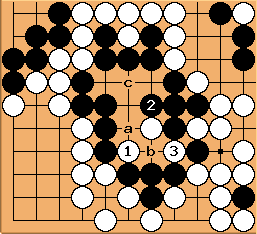 tderz: Black can live - in Gote with the sequence a-b-c (c...a-b, if White was expecting ko fights and needed threats; here not the case).
Black even has forced White to accept the capture of only 4

.
Due to tedomari the Sente/Gote-difference
might be worth only zero to 1/2 point at this stage of the

= a herself due to damezumari.

Again, let me point out once more the potential for confusion when using deiri counting. Black can make x points with gote, or White can make y points with gote. It is misleading to say that whoever made the play snatched away x + y points. That implies that the position was worth the same as if the other player had made a gote play. Of course, it is natural to think that a gote that is worth x + y points gains x + y points, but that is not so with deiri counting. It is so with miai counting, however. If you want to talk about gain and loss, use miai counting.

tderz Bill, once in a year I read about miai and deiri counting, usually when browsing (again) through Charles Matthews' 'Ko'-book. Then I understand it, but soon afterwards I seem to forget the terminology.