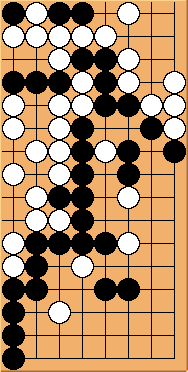 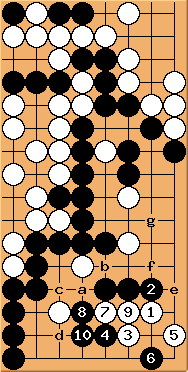 .
White a , Black b follow,
whereupon Black c and d are miai.

If White thinks of hane e during these exchanges,
Black retreats safely with f or connects at b sooner,
as he always has the peep g.

I think White cannot get life there.
(Have to admit that I consider it a negligence
that at least trying such sequences did not occur to me during the game)

- I think yours is not devious enough... White can get something... ...Oh - I forgot to include the row just above the top row. Makes a big difference. I added it to both diagrams. 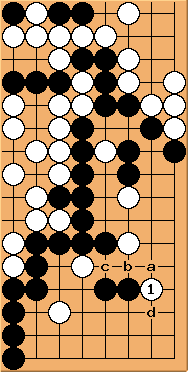 is a possibility, if black a then cut b gives aji c or extension d.
Notwithstanding that aji c might not work for White,
I'll continune with blocking hane d for the moment. 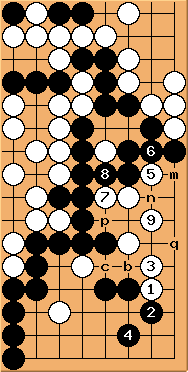 is very careful (cooncerning only the lower side),
let's assume its necessity for the moment ...
yet it could be played at c.
Now even after an exchange m-n, the points p, q are miai and White would live.
However , it depends on the right premises,
i.e. was

necessary and had it to be played there?

I think that was your idea. 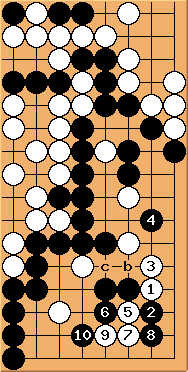 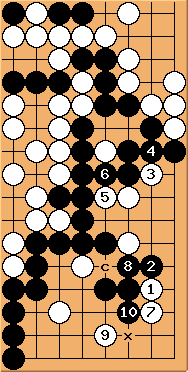 doesn't need to be played. 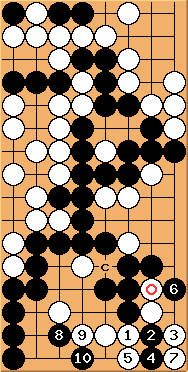