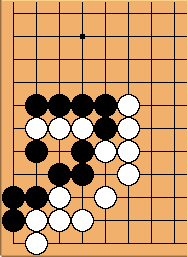 This is an endgame position. All other useful moves were played and I thought that Black had to make one more move in his territory. 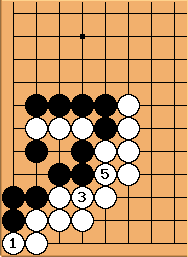 . My opponent thought for a while and passed. I played

. The opponent thought longer and passed. I played

. He passed very quickly. After my next move he resigned. To tell the truth I was a little bit (about 5 points) ahead in that game anyway.

Consider this as a very easy problem. But it is a tesuji, so I'll post the solution.

is wrong. See my explanation at FillingDameExampleAmended.