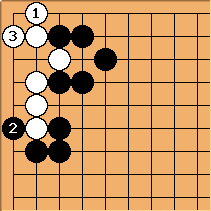 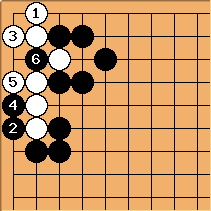 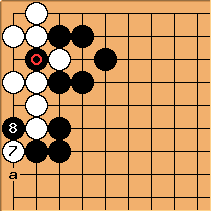 zinger: But now white can run down the left side at a, meaning that some moves down that way will be sente. This would not be the case if 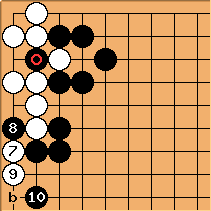 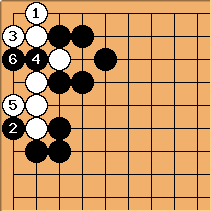 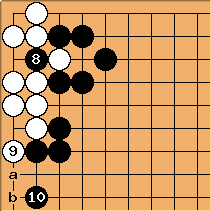 could be also at a (which is weaker)
Is there a big difference between those two diagrams?
Both end with

at the same place.
In both cases, White could move to b, but would be enclosed.

Usually I go for shortest sequence, here your proposal seems a better for all those cases where b could mean a connection for White (as Black could play ko at a).

zinger: Yes, it seems the difference is smaller than I thought. Good analysis :) 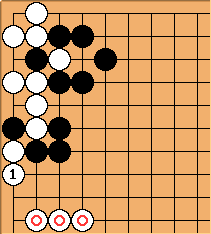 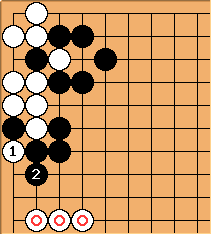 Bill: Now, the original diagram did not show what was on the next line on these diagrams, but let's suppose White has this wall. Now the second variation is the only one to kill.

Of course, in a real game such White strength may be unlikely, but it does illustrate the fact that Black has less to worry about in the second variation, and White has fewer threats to save her stones.

tderz: Thank you Bill. So we can conclude that zinger's wall is just always better, as this wall could as well be created much later, e.g. due to an invasion.
It are those seemingly tiny differences which create chances and set the ground for stronger play. Thanks.

zinger: For the record, it's not really my variation. Walin gave it on the attempts page. 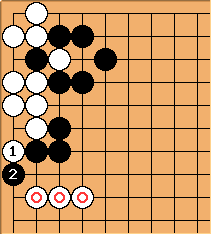 tderz: That was the ko, I referred to earlier.
The white

-wall is closer to the corner. 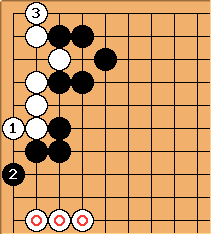 Reuven Actually this wall would change it all... (This page needs a remake >_<)