Toroidal Go (henceforth referred to as t-Go) is a Go variant which is played on a graph that can be seen as a normal board where the edges have been removed as follows: the edges wrap around horizontally and vertically; they link up with each other so all points have 4 neighbours; each point on the far left is linked to the point on the same horizontal line on the far right; similarly for linking up points at the top and the bottom.

In order to help players' reading, two techniques are used in computer software (t-Go clients and editors): wraparound", described below, and panning (AKA drag-and-drop"), described in toroidal go / maths.

The name Toroidal Go comes from the fact that this board fits naturally onto a toroid / doughnut three-dimensional surface. See toroidal go / maths for other mathematical considerations.

T-go is just one example of a family of go variants called edgeless Go.

In the fuseki as Black I tend to aim for several things at once. I try to develop territorial frameworks (I choose this term instead of moyo because on an 11x11 board frameworks have to be fairly small). I try to make them large enough in scale so that White has to make thin shape in order to prevent them from becoming territory. I look out for opportunities to split White into separate groups with thin shape. I also try not to let my shape become too thin.

With White I attempt to limit Blacks territorial development without making overly thin shape; if neither player has large territories at the end there is more chance that the komi will swing the balance in Whites favour.

In n x n t-Go, when the board is represented as an n x n grid, a point on the edge of the grid is linked to the point on the opposite edge, which can be hard to visualise. There is a natural way of expanding the flat n x n grid by adding extra lines around it in order to make visualisation easier. Typically three or four lines are added; the number of lines added could be a matter of personal preference. The extra space added is called 'wraparound' in this article. Each point in the wraparound is just an additional representation of a point in the original grid, which we call the 'main area'. Its not really necessary to explain more formally, when there are examples readily available (see the next section).

Ideally when wraparound is included, there will also be some way of easily seeing which part of the board is the wraparound area, and which part is the main area. 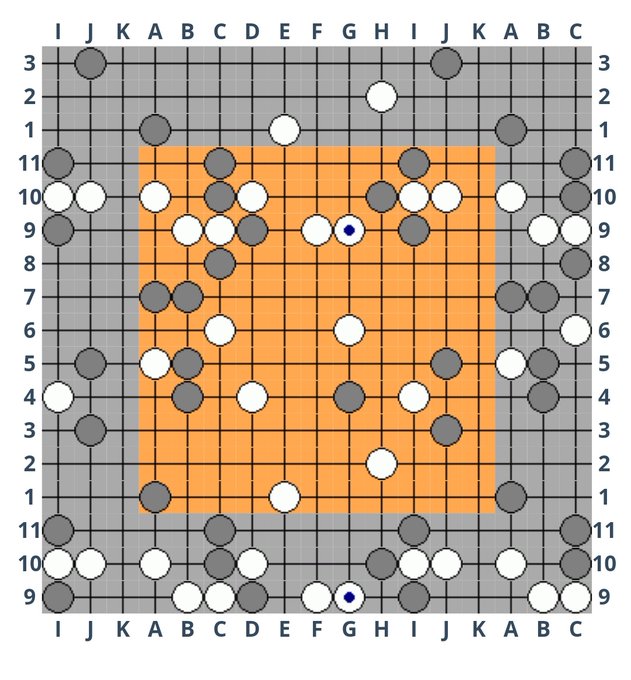 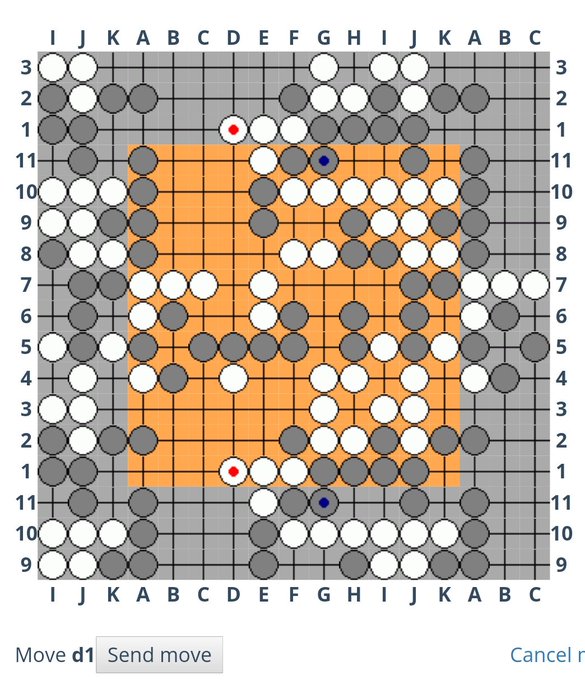 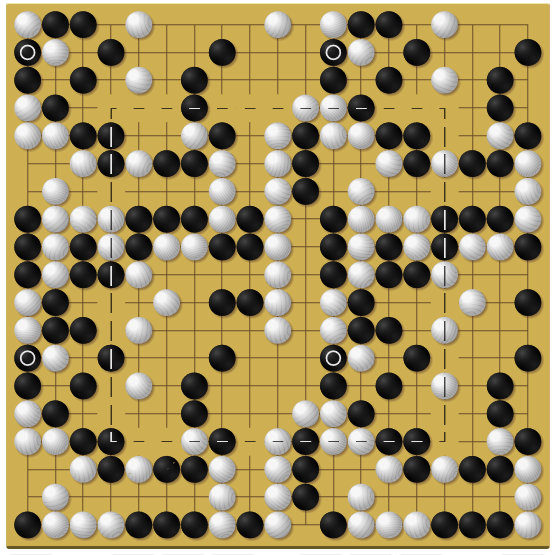 A tsumego - White to play and win - from

You can play online against an AI here:

The AI is based on katago and was made by Guoliang Cao. It is open-source; more details on github (

link). Cao made an announcement about this in July 2022 (

You can play against an AI, or let AI play with itself. You can play even or handicap games, on small, medium or large boards.

The AI model was trained mainly on 19x19. So it's not as good on smaller boards.

To give you an idea how many handicaps you should use:

ongoing Infinite tournament has 21 players registered. It is set up as a type of ladder tournament:

2. There was a previous version of the infinite tournament which lasted almost 8 years.

Link. The following statistics for this tournament

were extracted in July 2021 by William Fraser:

3. One-off tournament on littleGolem with 7 participants; 14 games were played:

Other links and resources

Mentioned above in the AI section,

daoqi.org also can also serve as an online t-go board, letting two players play together (using the same device). It has panning and 3 lines of wraparound.

The SGF with variations and comments for the items above was all written using the t-Go editor tool mentioned in the previous section.