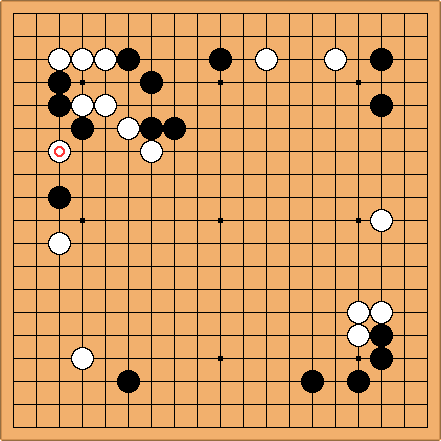 Sakata is playing Black vs. Takagawa.

White has just invaded. How will Sakata deal with it? 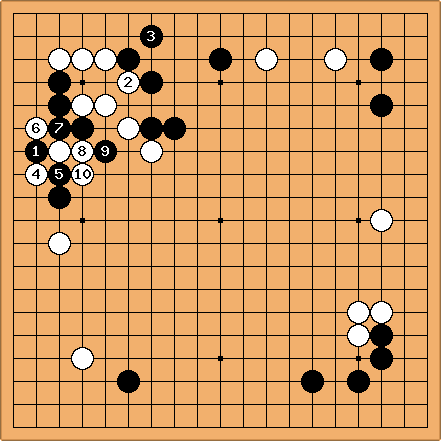 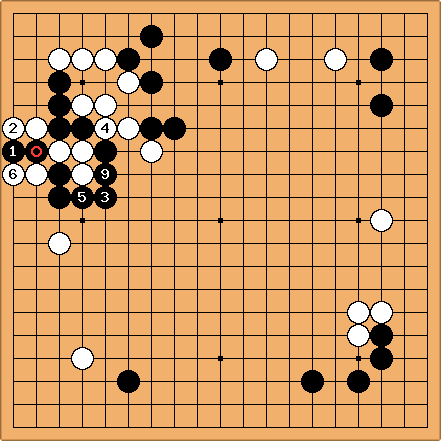 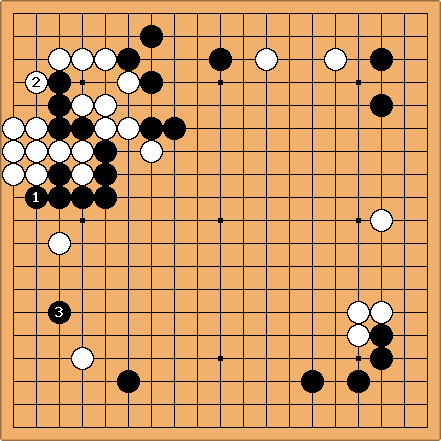 Having built up thickness in sente, Black invades White's position in the bottom left.

This example comes from Sakata's Go, vol. 5: How to Sacrifice Stones. 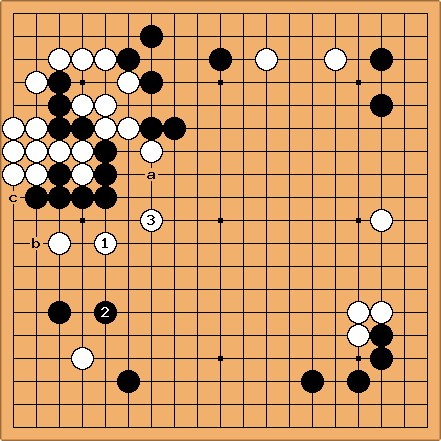 Dieter: I understand that Black has built influence but thickness? After

, Black already has to resort to contact plays such as a or b. Thick positions should not be in trouble so fast.

Bill: Well, this is Example 9 of Chapter 2, 厚みの作り方 (How to make thickness). If Sakata calls it thickness, that's good enough for me. :-)

And don't forget. Black has a kikashi at c.

John F. I presume Dieter's problem is that he is inferring atsusa when the Japanese was atsumi. Both have commonly been translated as thickness, and this has confused very many. Some may therefore want to refer to atsusa by some other word such as solidity, but the problem there is that there is a "blood" relationship between atsumi and atusa. For one thing, when the adjective is used (atsui) it can refer to either and you have to work out which meaning is meant from the context (and atsui has other go meanings as well). Also atsumi can easily transmogrify into atsusa, though admittedly lots of atusa may never act as atsumi - it often represents just an unattackable group rather than a basis for attacking the enemy. FWIW, I find it convenient in my own writing to translate as SA-thickness and MI-thickness (and for the other cases, ER-thickness and STYLE-thickness. Ugly but useful. I think it would also be useful if anyone mentioning thickness could also give the original term (or use my neologisms, maybe),

This is also very important when Chinese texts are being quoted. We need to know whether they are using the borrowed Japanese term or the incredibly interesting SHI-thickness, which some of the latest crop of Chinese players seem to have rediscovered with much success.

ER-thickness is when one player has the thickER position near the end of a close game, meaning he is likely to win by getting more of the endgame points (because his positions are stronger and so there are fewer sente players against him). The Japanese is atsui and this is often rather mistranslated as thick - thicker is usually better. STYLE-thickness refers obviously to a player's style, but usually means he opts for honte and safe territory rather than MI-thickness.

SHI-thickness needs a book on it. SHI (it also has sub-types) is of huge interest to western intelligence analysts as the Chinese military and government think that way all the time. It is very different from the Clausewitzian concept of war and very, very few western military experts have ever properly got to grips with it, from what I've seen (I've never seen an Art of War translation that copes with it). It is fairly well mirrored in old Chinese go, which of course began with four SHI stones, but the Japanese influence (and borrowed terminology) of the 20th century subdued it somewhat. As I say, it seems to be making a comeback now (BTW Go Seigen was not really a SHI player as most of his influences were also Japanese, though I imagine he may have picked up some ideas from old Chinese games).

Which begs the question: what IS SHI-thickness?