The Power of the B2 Bomber / Escort

An escort is any shape that is used to enhance the already stunning power of the B2 Bomber. While the Bomber is extremely useful and difficult to fight, and is considered to be a 4P level move, escorts make it nearly unstoppable and are considered to be along the lines of at least 6P. Any B2 with escorts is said to be "in formation", and the overall group of B2 and escorts is called a squadron.

The most common and the best-known form of escort is the empty triangle, which, surprisingly enough, is not considered to be bad shape when used in this fashion. This following example should show why. 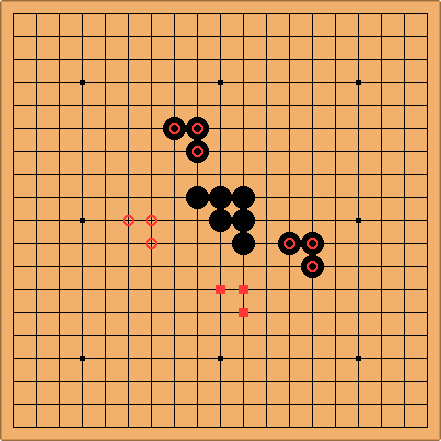 In this example, the B2 Bomber is escorted on each side by an empty triangle known as a "fighter". The positions marked with circles and squares show other possible positions for fighter escorts.

When in formation with a B2, empty triagles become fighters because they are able to strengthen and extend the Bomber's already incredible reach. Acting as vessels through which the Bomber's immense influence can be increased, focused, and manipulated, they inherit some of it's natural, raw power and can no longer be considered as "bad shape" unless cut off from it, which should never be allowed happen.

In the rare case that a B2 is in trouble, escorts can give it the support it needs to escape. As such, they must be close enough to the bomber to be easily connected to it. Otherwise the formation is thin, and this can be as devastating as having thin moyo.

An important fact to note is that to count as true escorts, the fighters must be facing in the same direction as the B2 Bombers they are meant to escort. Anything else is considered to be ugly play unless subject to particular circumstances.

It is believed that more examples of escorts exist, as well as other B2 enhancing strategies, but information is scarce. Hopefully we will be able to fully realize the potential of the B2 Bomber with more knowledge.