Various thoughts on the suji of connecting underneath

Dieter: I think that it is better for Black to immediately cut at 3 in diagram 13. If White captures, this reverts to diagrams 14 and 15. If White extends, Black connects. In the latter case, he has not made the exchange 1-2 in diagram 12 and thus not given away a stone for free. 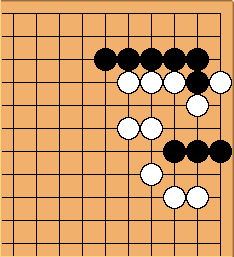 Problem: How to connect the three isolated black stones to the corner ? 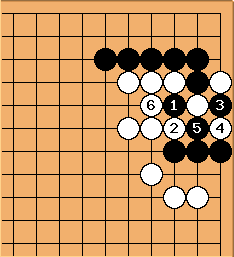 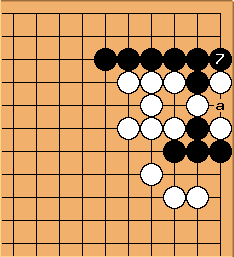 , White can't connect at a because of shortage of liberties. 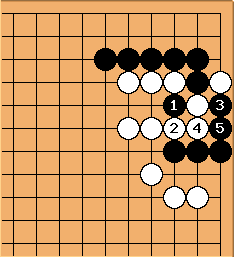 So White will extend with

and Black connects underneath.

Now for my suggestion: 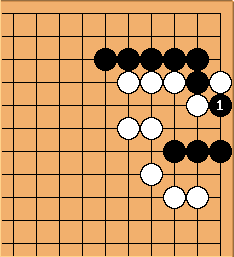 Dieter: I think that it is better for Black to cut immediately with 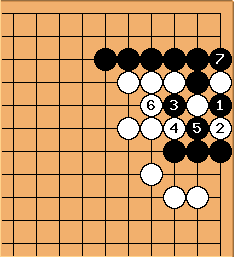 If White captures, this reverts to Sakata's solution. 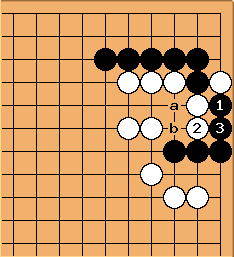 If White extends, Black connects. If we compare this result to the variation in the book, we see that in the latter Black makes the exchange of a for White b, a loss of two points compared to Black b - White a. 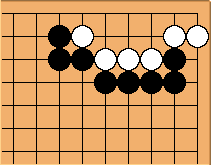 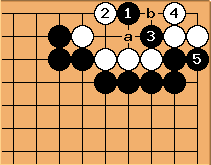 White is in shortage of liberties at a and b. Everything OK up until here. 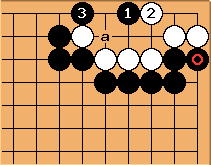 The second variation, presented as "if White makes the diagonal attachment of

at a still works. When it is not in place, too. This is just awkward but not really inconsistent. 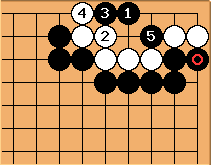 The third variation, White connecting at

, creating shortage of liberties. However, this is only necessary when

is not in place. With

in place, Black can play

White can't play at a: she is already in shortage of liberties! 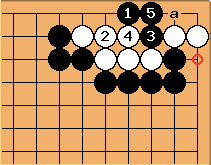 The circled point is now empty. Now White can play at a.

is better at a, making ko. --BillSpight 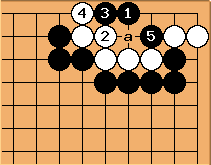 and only then does he cut at

. Now White is unable to play at a because of shortage of liberties.

Variation 2 being awkward, and the comments in variation 3 being inconsistent with the diagram, it is my opinion that

RichardHunter: You are correct Dieter. I have the book in Japanese (56th printing 1973) and the red circled stone you mention is not present in the diagrams. Either Yutopian was working from an earlier, pre-corrected, printing or this is an error introduced in the English version. The

SmartGo Book digital version, which is currently available, omits the spurious stone, no doubt thanks to your observation, as the person doing the SmartGo books conversions generally consulted SL errata pages.