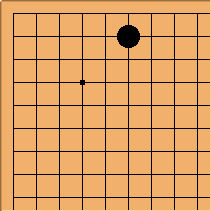 Someone played this against me recently. The game is on-going so perhaps best not get into specifics now. I was just wondering if this is simply a total beginner mistake, or if there could be some reason to play this way. I'll post again when we're past the point in the game where this matters. Thanks. TedErnst

Was this over-the-board, or on the internet? It could simply have been a mouse-o that the person decided to just live with. If it happened over the board I'd say they were messing with you. AndyPierce

Herman Hiddema: I don't know if this is a mistake, it may be meant as a trick play, but it is a bad move. However, it will change how joseki in this area work and it will probably help black in any upcoming fight in this area. Personally, I would simply ignore this move. Black has no good local follow-up so you can safely ignore this stone until the rest of the board makes it clear how you should play here. 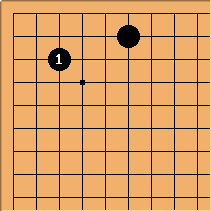 Bill: No good follow-up? What about this magnificent enclosure? ;-)

MrTenuki: But is this really better than the 3363 enclosure? 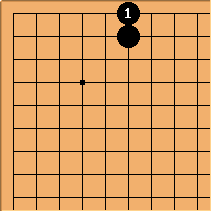 LukeNine45: Yes, you'd better respond because otherwise, black can descend and make an iron pillar at the same time-- a dual purpose move!

(More seriously: there's no reason to play on the second line in a completely open area like this. Black has already punished himself-- you don't need to do anything. When you get around to playing in this corner, just be sure not to play a move that leaves this black stone on a good point)