Played a weak 3:4 result in 7 rounds, mostly to my notorious time troubles under the 45 minutes sudden-death conditions. Everyone said 'Ni hen lihai' (you're playing strong), I usually replied 'Zhongguo ren zongshi guòjiǎngle 过奖 wo, shijian ye hen zhongyao!' (You are praising me too much, time is important too).

In the 1st round I had a 5 dan as opponent and pressed him quite low everywhere. Quite skillfully he managed to escape with a weak group after he (mistakenly) allowed me to connect my own group easily. In the end I have 30s left, he still 10 minutes, I make a very simple mistake , my group dies, his is thus easily connected. Anyway I had lost on time ... (add qipu)

2nd round I get an old man 1k as opponent who was playing quite weak, but must have been very important for Beijing or Chines WeiQi as he sat on the penal and was praised quite much in the final speech. They used a complicated(?) handicap system involving reverse komi (thus no placed handicap stones) which I don't like. I prefer the Western system, playing on even. I don't play endgames, hence eventually he had one group left with about 12 points and the rest were 4 dead groups. Still I was not good in time either...

3rd round: I win an anormal game vs. a 2 dan: I'm down to 30 seconds after just having snatched away (unrightfully? He didn't believe the miai of normal endgame move (10 points?) and live of the neighbouring group) a group of my opponent in a yose-ko (I had the liberties). After being down to 7 seconds I decide to PASS consequently, have my hand ready on the button. (The clock had the nice characteristic to not take away any second from me for multiple passing. I think that's different to our/my DGT+). Opponent calls for referee, who decides that I am allowed to pass (Chinese Rules) and opponent may take all endgame points. As there was 1 normal endgame left (stone capture) + several (jap.) dame plays (counting as area points under CR) he thus got another ca. 15 points (which the referee filled in). This ruling was a bit favourable for me, as in practice he is allowed to play also - normally unreasonable - inside cuts and point losing moves, which yet are dangerous if unanswered! In the end I won by perhaps less than 10 points.

Second day, 4th round: lose against a 3?4dan (?) in a double kakari hoshi variant which is most probably hamete (he played it , but didn't know ). We both make mistakes in a sequence where every move, liberty counts, I commit two more, including the very last one
-> TAKE STONES OUT when you can!
Fast & early, especially if it's those turtle ponuki shape.

Hope I have engraved this into my mind.

5th round: Win against a 4 dan killing a big dragon (shale da long), because he made one peep which I answered indirectly (he couldn't cut anymore) and he didn't believe my leaning-attack moves (he wanted to keep the territory and live). 1 minute 28 seconds left. The start was quite slow and bad(?) after I got dragged into Taisha where he had stones around both side hoshis. So I decided to give up one half fast.

6th round: lose against a 2 dan after heavy infighting (but ueberzockt), another player drops by the post-game discussion and comments 'this stone belongs here' (a blocking move), I ask him about his dan (thought he was 5 dan) but he was lower, he just said 'that's the common shape' and he was right!

My shape was an inside cut, which committed unimportant stones into the fight (in bad shape), much better to give them away!
Hope I have learned at least this shape from this game.

7th round: lose against a 4dan after making a final, simple mistake (1 point more ? No, his atari + connection!) in time trouble directly after having cut off his 6 stones in the endgame, which might have given me the game.

During the game, Wang Runan 8p (author of

Power Builder), dropped by and while I made my move (connecting a stone in atari) tapped my shoulder and told me laughing 'Bad move, you shouldn't connect there!' (perhaps because I was the only foreigner at that tournament). 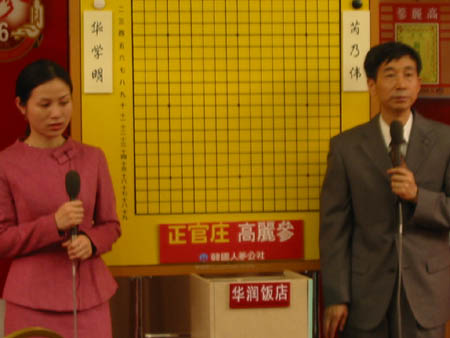 Being fair, my opponent immediatly connected his 3 stones in snapback-threat
(which was bad too, because my surrounded stones where already alive. :-)