TFG9 White at the Top

Remember, here we are concentrating on the situation of the White group in the center top, ignoring for the moment the state of the black stones to the left. 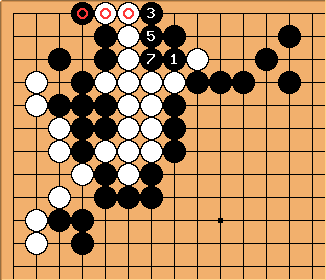 What it really means is that if Black makes five liberties on the left, White can't afford to continue there and is forced to come back to the center top and play there. What happens if White does? 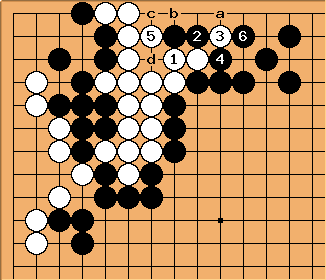 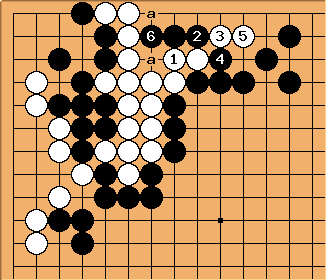 here, extending the liberties of the cutting stone, B stops White cold with

, reducing White to two liberties (either of the points a next puts White in atari).

From this it is clear that

above does not help White. What next? 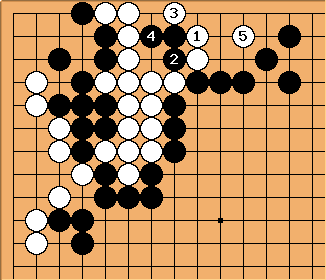 Note that this case raises the important question of what happens if both sides live. Assuming that White came back to the center after not being able to capture Black on the left, who wins the game if Black lives on the left while White lives in the center?

But is this the best that Black can do? 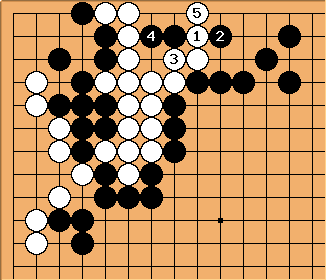 (2, 4 elsewhere) Final count is +3 here with +3 in the previous diagrams for a total of six internal plays required for Black to capture White. 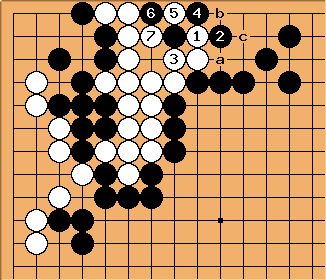 in diagram 2b to here. White has an outside liberty at a, and can throw in at

and after Black captures at

Oops!!!! This is not correct. When Black plays

, White will not capture at 6 but instead will extend at

. After White b, Black c it is ko but White has fewer liberties than in 2b (total of five?). This changes the conclusions below. I'll have to revise them later. -- Dave