The superko rule, in different versions, while allowing certain multiple ko situations and repetitious positions such as Eternal Life to be played out rather than continuing indefinitely, has also given rise to certain rare anomalies or undesirable situations, at least on paper.

One such reportedly motivated Ing to change his rules to distinguish between fighting and Disturbing Ko.

Andrew Grant: Another reason for disliking superko is that it can lead to some odd life and death decisions. For instance, in the diagram, White is alive: if Black plays a, White replies at b. 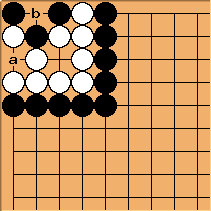 But add another such "live" group and the status changes: 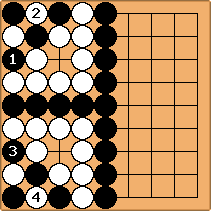 at a due to superko (and he can't recapture

due to basic ko), so Black can now kill with 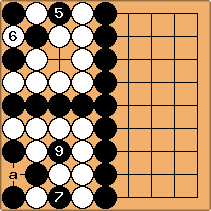 You can accept this as just a feature of superko, but it's very odd that if you have one of these groups it's alive but having two of them makes it killable. I believe that it was considerations like this that led Ing to introduce his distinction between fighting ko and disturbing ko.

Dave Doesn't this situation just mean that correct play after

is to capture at the top? White lives once and dies once? To me the strange part is to think that White should automatically live everywhere no matter how many tenuous positions are on the board! :-)

RobertJasiek: Odd life and death outcomes are not a pecularity of superko but also of every other ko ruleset. E.g., Japanese ko rules lead to strange outcomes.

Bill: Let's not forget that, without superko or Ing rules, Black to play can potentially force an indefinite repetition, so this position is anomalous or undesirable to start with.

Bill: The Method of Multiples, as applied to this superko, shows that it, like a regular ko, has a cycle of 3, where 4 of them leave one double ko death with the rest miai, as does 7 of them, 10 of them, etc. That suggests that the double ko death is the odd man out. ;-) 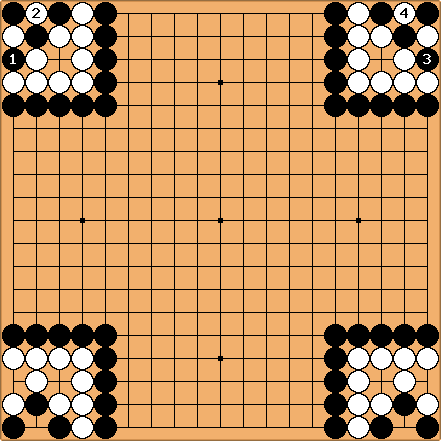 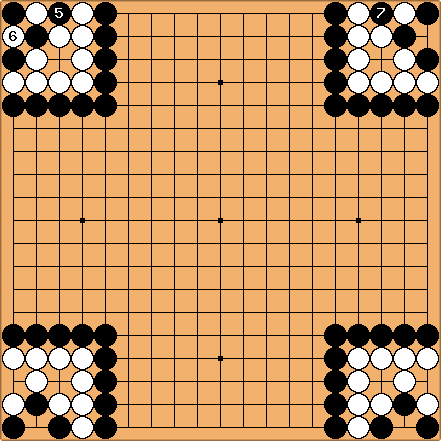 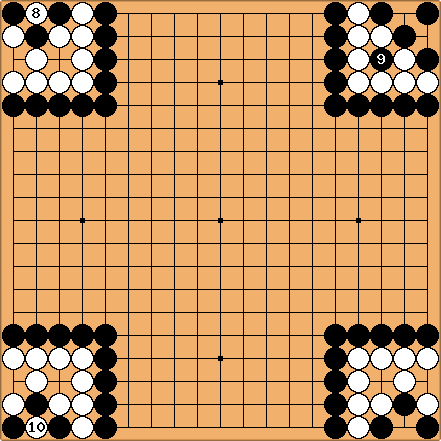 One White group dies, two live with an extra move, and one remains as a double ko death for Black. (The reason for the extra copy is that, if there were only three of them, White would not need 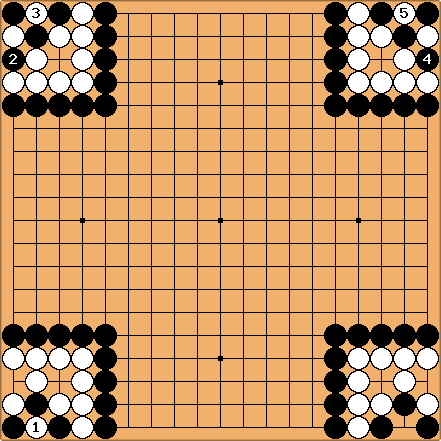 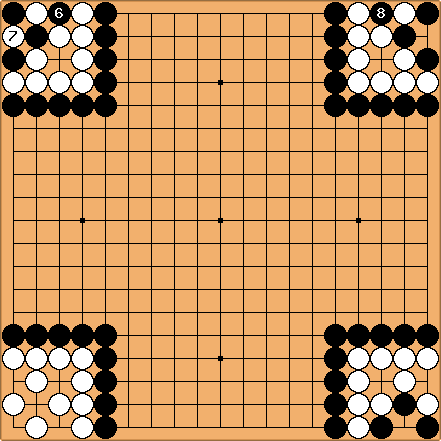 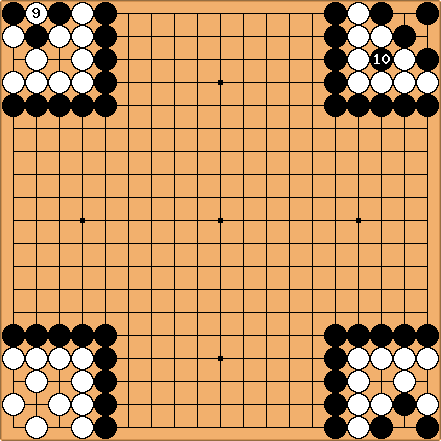 You get the same result when White plays first.

OC, the method of multiples assumes something like superko to keep indefinite repetition from preventing assessment of positions with many multiples. So there is some circularity, if you are trying to do more than show the implications of the superko rule. But it does show that the rule does not "bring a dead group to life." 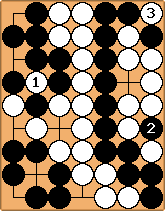 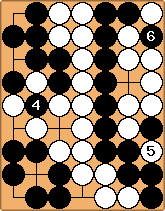 Now Black 6 would recreate the starting position and is forbidden with Superko. The ko on the left then is lost for White, but the double ko seki is presumably bigger.

Dave What is the meaning of "anomaly" on this and related pages? It does not seem to be anything rigorous, more like "something one of the authors thinks is strange".

Bill: My original thought was about unintended consequences of superko rules. That's fairly vague, but, as this discussion indicates, not everyone agrees on what is an anomaly.

Dave Thanks Bill. That makes more sense to me.

Fusojigen I am not sure what super ko rule you are using but I am arguing for the NSK: natural situational super ko. Which means: "No player may play a stone so that it recreates a position of the board which that player has already created before." With this rule, your first example, with 1 shape makes a normal ko and lives only cause there are no ko threats. In the second example, it does apply that white cannot play 8 without a ko threat first (so that 1-7 sequence becomes the 'play' a player does between each ko threat), if broken, it'll lead to that 1 group lives and 1 dies, I do not see the problem with this, it dies because you do not have any ko threats, making a copy of the shape creates ko threats! If we wouldn't consider super ko rules, it'd still lead to the first group living but in teh second case, they'd go on for infinity (or alike). Does it make more sense when compared to the first example? P

Bill: I am not sure about applying the NSK to positions that are not initial. Do we assume that the second player created the position?