The following game shows a fuseki which illustrates the proverb that one should extend from a crosscut when there are no other stones nearby. You can

DaveSigaty: I just came across this game - the epitome of the proverb? :-) 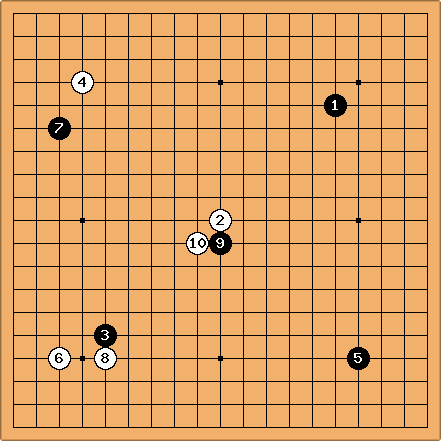 Takao tries Yamashita's own 5-5 point opening against him and Yamashita replies with a play at tengen. The fun starts with 10. Naturally Black crosscuts! 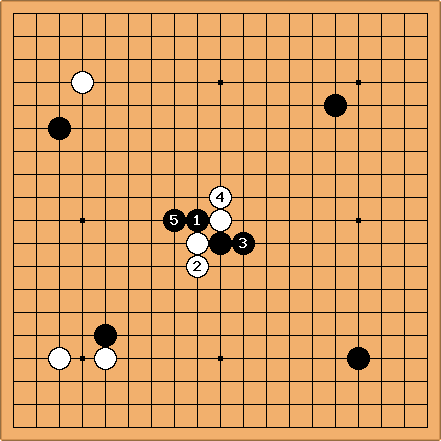 Both of these guys know their proverbs! A nice little pinwheel shape develops in the center of the board. 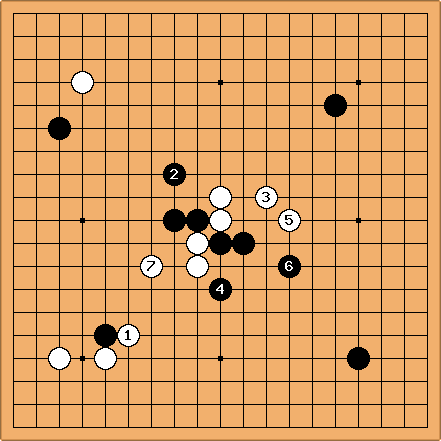 White went on to win the game and thus the tournament.

Does it seem to anyone else that pros are much more likely to play this kind of wacky game when they are on live television? This seems like the kind of go that would be likely to lead to crazy new things that would interest a viewing audience much more than a quiet game or an incomprehensible (to most amateurs) taisha fight. Do professional go players do this kind of thing on television because it will enhance their fame and demand more than just another victory?

DaveSigaty: My impression is more that they will do this on TV because of the lightning time format. For all that we say pros are different, they still share with us lowly amateurs the ability to make mistakes under time pressure (just a better class of mistake!). I live in Tokyo and watch the NHK and TV Tokyo Go tournaments almost every Sunday. The NHK is still played at the leisurely pace of 30 seconds per move. The TV Tokyo tournament converted to 10 seconds per move this year and I find it almost painful to watch because there is so little time available per move. Setting the opponent difficult problems is very much a part of such games. There are various unusual fuseki tries from time to time but many more unusual joseki (virtually every game).

HolIgor: It looks very much like Shindo Hikaru's last game in preliminaries to ths fictional Hokuto Cup tournament, doesn't it?

Dave: Yes, that is why this page is linked to Hikaru No Go/Games ;-)