"To the deshis: Some of the exercises below can have tenuki as an answer, but since this is an introductory level exercise, let us ignore this possibility."

nachtrabe This seems a bit misleading. Tenuki--though it is often the best move--is never the answer on "how to capture" or "what is the best sequence of moves to capture" kinds of problems.

Bill: If capturing is not a good move, why have such an example? It is not like we are hurting for examples of atari. Suggesting bad moves sows the seeds of bad habits.

Brent: I guess the point was that for some of the exercises, tenuki is not just the best move in general, but in fact the "best move to capture", since the stones are already captured as they stand. This seems to be the case with Exercises 3[1] and 5. I agree with Bill, this can teach the bad habit of capturing whenever possible. I have been teaching some new players, and it took a while for them to understand that if a group of stones could not escape, they could (and should) leave them alone and play somewhere else instead of wasting a move capturing immediately.

tderz: [1] To Brent: ex. 3 differs from ex. 5: the capture in problem 3 seems like a honte move to me. If white, e.g. moves out with her 2 stones, Black might later play exactly at honte play

and provide White with nakade.

Brent: ah, good point! I was just going quickly through and looking for stones which coudln't escape... but it appears I forgot to consider issues of life + death. 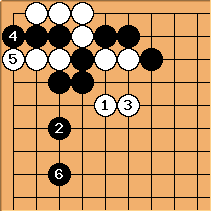 here instead the solution and

which defends against a very

kills by nakade in local sente.
Consequently I find the solution

unkx80: These exercises were originally meant as introductory exercises for people to identify whether an atari has occurred, that's all. However since there are objections to some of the exercises, these can be changed.

WillerZ: Exercise 2 in the first set contains 2 white groups in Atari, but the set description says that each diagram contains only one group in Atari. Which, if either, should be changed?

xela: Exercises 6 through 10--"choose the best way to capture"--where there are stones of both colour in atari, this is very confusing! Is it better for black to win, or for white to win? The solutions don't enlighten me at all.

fractic: The question in exercises 6 through 10 seems to be the best capture for both players. So it's two in one. This might be stated a bit more clearly though.