Snow White In The Dark Woods

This page needs wiki master editing.
Comment: Both the main page as well as the subpages!

This problem was presented to the International Baduk Congress 2001, and reported to the Belgian community by JanRamon. --Dieter 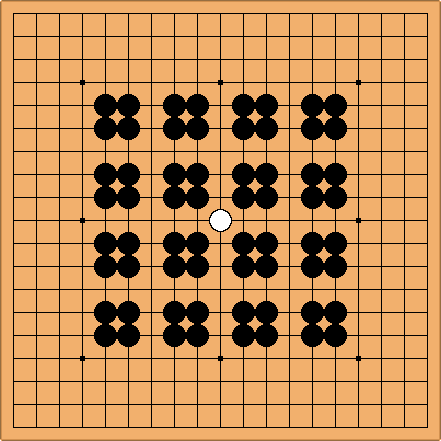 At first sight it seems impossible, until one thinks of miai.

The exercise was presented as an alternative to AtariGo as teaching method. What do you think of Atari Go Teaching Method ?

I think this would be a terrible teaching method. But it is a fun problem. -Jared

This may be a stupid question, but can it actually be solved ? I though I had the solution, using miai, until I tried putting trees in the intersections of lanes. This way, you can use one tree to block two paths at once, ultimately killing White. -- uXs

''I thought so too but found out it doesn't work either for Black. If you want, make a page with your refutation and I'll try to refute it --Dieter)

If you are worried by trees growing in the intersections of lanes just remember the proverb: "The opponent's vital point is my vital point" -- SiriusBlack

Some more: actually, I'm not entirely clear on the rules: is it possible to put a tree on the fourtth line ? If it's not, then there's no problem. -- uXs

Arno: no, you're not allowed to put a tree (black stone) on the fourth line (No trees can grow outside the woods). Indeed, once you know enough to play miai, the problem is easily solved.

Why? I think if White starts, White can escape even if trees on the fourth line are allowed.

Another question: who starts? Black or White? -- uXs

Does not matter: see /Solution 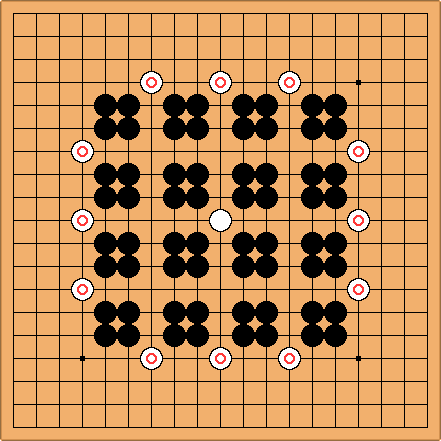 Since Black is (allegedly) prohibited from playing on the fourth line, we could just as easily use this diagram for the problem ...

The white stone in the center must connect to one of the marked white stones to win.

This diagram makes the actual solution jibe with weiqi intuition a bit better.

I tried to solve this problem, but first I misunderstood the rules. By this way I found a new variant of this problem.

In the actuall problem white has won, if white comes to the fourth line.

My new rule is: White has to put the last stone on the fourth line. The last stone has to be one of the marked stone in the upper diagram.

I think there is a solution, where miai is used in a strong symetrical way. But may be I am wrong:o) QWerner I was wrong. I will delet this soon 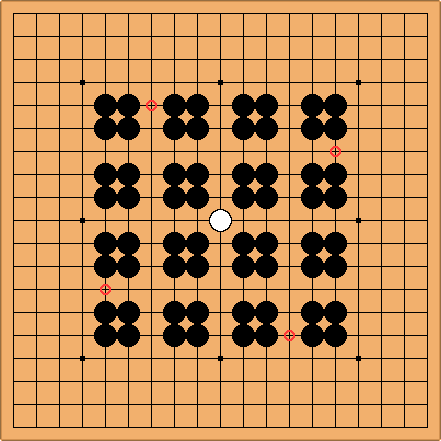 Bill: Does your strategy work if Black, unless otherwise forced, plays on the

This will work against your strategy for Black, Bill.

Snow White In The Dark Woods/RefuteBill

Bill: White gets to the fourth line?

Is there a similar solution when larger woods are used? 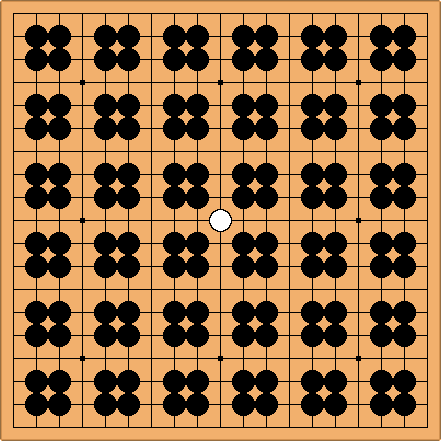 posetcay: I tested out and it doesnt seem to work when black tries to capture in large scale. 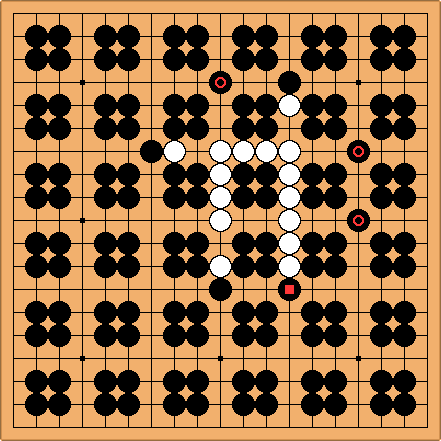 Black's marked stones on the 4th line are used more effectively in this variation, pushing white into a dead end.