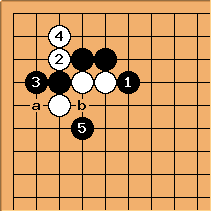 In the small avalanche joseki,

(instead of a) is a trick play that may be played when the ladder at b is good for Black. The refutation for White can be hard to find however. 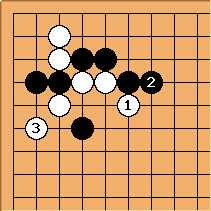 is natural to prevent the ladder, but after

, it seems that White has a problem. The tesuji at 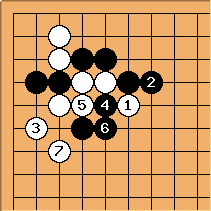 With the moves up to

, Black can cut off

, but White takes the corner and manages to escape with

If White tries to avoid being sealed in by playing

, Black will connect under at

, White has fallen for the trick play. With the moves up to

, Black seals white into the corner while cutting off

. White can push through at a, but b is atari, forcing White to capture, after which Black can finish his wall with a move at c. 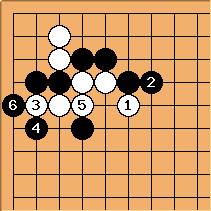 is even worse. After

, the white groups are disconnected and heavy. 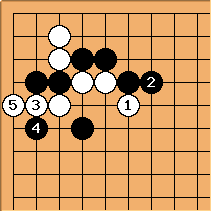 is not so bad if white plays 5 as descent rather than atari.

As white descended she has an extra liberty and can push through and capture the stone on the 2nd line in sente, which is a big improvement over the previous diagram. I (Uberdude) think this is playable for white as she gets sente and there is still some aji on the outside: activating the marked cutting stone and the peep at a are things to look forward to.