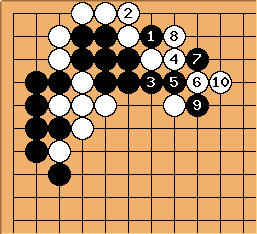 Charles If Black has really no more choice in the Shape Problem 6/Net variation than to play all the ataris, it gets pretty interesting. 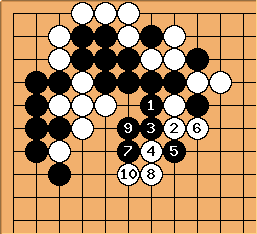 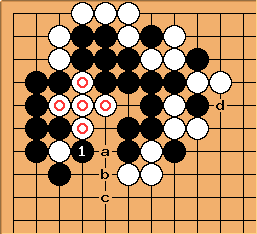 is required, really (at a for mad variations including seki).

Assuming White was set on sacrificing the

stones, this would do, I think. White has a useful kikashi still at b. If you look at it, White at c is also a threat here.

This kind of 'plaster the outside' variation is usually assessed quite favourably for the side with influence, despite cutting points.

So, is this really the one-way street it appears?

in diagram (iii), I think B b is OK. White may play at c with sente. I also think that White needs another play here. Maybe the capture at d. 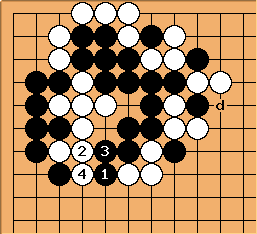 Charles I did assume this was unplayable for Black. Do I have this right? 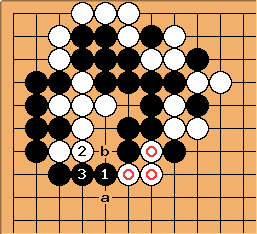 Bill: I was thinking more along these lines, if White played

right away. Making seki, if it is even possible, is a large yose. The

stones are not necessarily alive.

instead captures the White stones, it gives White kikashi with

) stones. If White plays kikashi on the left instead of

. And if White neither plays such a kikashi nor

immediately, Black may get stronger on the left side, making

On an empty board, I think that

is better than this diagram for White, and

, B b is even better for White. Which would have been better in the game really depends on the surroundings, I think.

Charles You're right - the seki may be eye-catching, but White wouldn't have time to play it yet: and holding together the outside is going to be 'interesting'. Black has not profited much yet, though. One of the more bizarre variations on SL.

And the unkx80 variation on Shape Problem 6/Discussion starts not only to look more 'sensible', but possibly objectively better sometimes? Actually this gets off my radar as far as judgement in the abstract goes. The joseki books, or the older ones anyway, pronounce on such things. 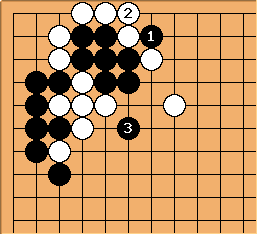 This is a kind of blind spot, for me at least.

may appear to be some kind of tesuji combination. 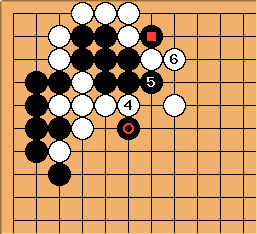 This shows Black is netted anyway. 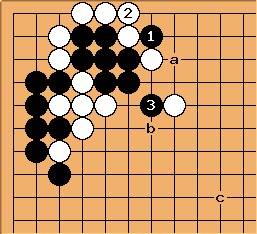 TDerz: It is interesting to see why another appealing move doesn't work either: My first thought was this kosumi-, atekomi or kosumitsuke-tesuji? combination. White must defend at a and wants to block at b. However, independent of ladders in the direction of c... 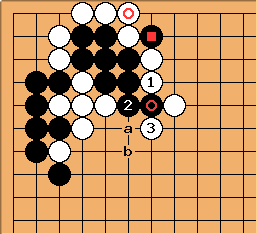 ... Black is captured in a short ladder 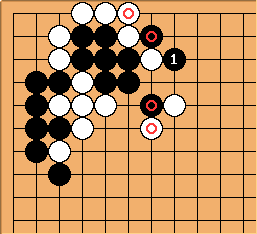 Black's intention is a hallucination and ... 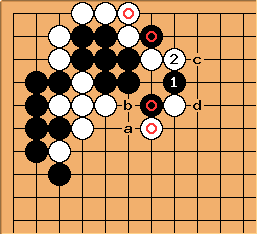 Black can make more mistakes: if after white 2, Black moves to a, c or d , eventually White b resolves the matter.