Reducing an enclosure framework by capping 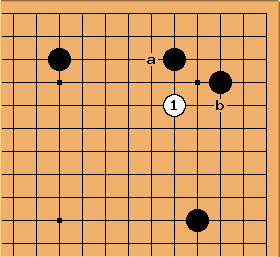 Depending on what side the opponent chooses to protect, White plays a tsuke at a or b on the other side and aims at making sabaki, which is a light running form that either builds eyes or connects to your own groups. With sabaki one does not have to be greedy though and sacrifice the tails rather than make a group heavy. 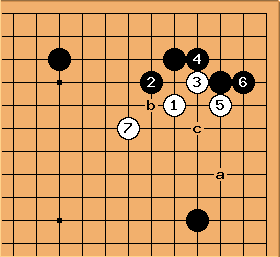 is a very GOOD one of many ways to reduce this black's moyo...

um.. anyway, i hope to add two (and very easy and useful) variations after this

. to speak roughly, there r two moves that black can choose against

. This move is mainly for protecting black's upper-side. If you think that upper side is more valuable than right-side, you should play this move as black.

can be considered as one of middle fight joseki. BUT!!! white can choose to play at a instead of

depending on ...um...conditions or ...circumstances.

Um...btw, black's b or c might be trouble for many beginners as white. But, these two moves can NEVER work well. The following 2 diagrams r simple demonstrations to show this. 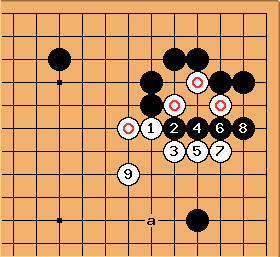 bud1027 As for black-b cutting, white would give up his three stones happily.

These stones r not white's body, but just its tail, thus all that black can take by cutting is just small cash.

On the contrary, at present, white's stones r naturally flowing (or streaming?) into center and making wall in right-side. As result, black stone in right-side looks very lonely.

Of course, this flow of stones is obviously bad for black. No strange that black would resign right now.

, white-a MIGHT be possible depending on conditions,,,but im not sure.>> 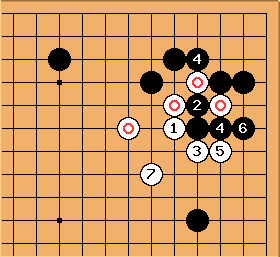 I think this variation is easy and obvious to understand. Thus no explanation. 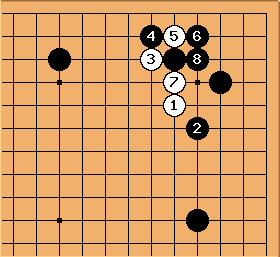 is the second move to choose as black. If black considers right-side as more valuable, he should play this.

is the most common way to do it.

(Warning!!!! : This move sometimes can be overplay depending on situation.but i would not like to explain it at now, cuz im Too lazy) 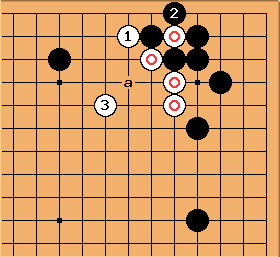 This is the end of second variation.

In this diagram, I should emphasize the move,

is the POINT that you should know about this variation. this move is light, and flexible move to reduce b's moyo and to ....um stablize white's group simultaneously.

, if white play a (really heavy move), this white group become very cute and lovable target of black's attack at sudden, thus the hell will be waiting for u.

Charles By the way, this is a 'strange' position, so discussing middlegame joseki here is (even more than usually) questionable. 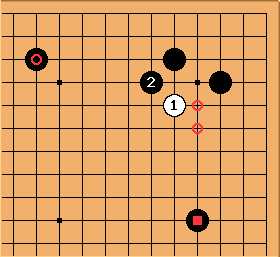 If you want to talk about

here, it ought to be in context with

. Black's extension one line less, as shown above, is not really a pro play anyway. But I think given

Black ought to think in terms of one of the circled points, anyway.

Um...I think you might be right, although I'm not sure.

Anyway, if you are right, your mentioning about the White b move in the first diagram is also strange and questionable ... and unnecessary, because, according to what you are saying, in this context, Black would not defend the upper side.

For example, your saying "Depending on what side the opponent chooses to protect" is strongly implying that to defend upper side is considerable as black, if I understand you correctly...

ChrisSchack: I think you have to take everything into account. Knowing that Black should defend the side, not the top, all things being equal, doesn't help if Black does otherwise or all things aren't equal ... and you don't know how to follow up on it.

Charles Please don't use Internet abbreviations. SL style is to use correct English. Everyone should write as well as they can - English language corrections will be made if you can just be clear.

ChrisSchack: I just mean that one may be a bit better than the other, but if you don't think about both, you may get caught out, saying "But ... but you're not supposed to DO that!"

By the way, Chris, where is your saying <<"But ... but you're not supposed to DO that!">> in your initial writing?