Err on the side of overplay

Bill: An overplay is better than an underplay. ;-)

On the other hand, at my level (12k* IGS), most players could use Bill's advice. I tend to win most of my games by being a little bit quicker to tenuki and a bit more ambitious with my moves. However, I sometimes lose a game because my move actually does turn out to be overplay and the opponent spots it. Still, I think the other players need to play a bit more ambitiously, even if it means risking overplay.

Bill: I'm sorry. I meant my remark to be tongue in cheek, not advice. I do think that if you err, it is better to err on the side of boldness.
Overplays are both the easiest and hardest plays for me to counter. I find obvious overplays easy to punish. On the other hand, borderline overplays can give me difficulties. First, is the play an overplay? If so, my opponent has missed something subtle. What is it? ;-)

Jasonred : In my humble opinion, about overplaying or underplaying, sometimes it's the extent of the overplay/underplay. Also, player ability makes a big difference when considering the whole issue, no?

Alex Weldon: The interesting thing about overplays is that, if answered correctly, the result can be devastating. While the loss from underplay probably linearly increases with the "badness" of the underplay, the "badness" of an overplay has more of an effect on how easy it is for the opponent to spot than how bad the consequences will be if he does. I mean, a slight overplay might be one where there's a hard to spot tesuji that ends up killing the whole group (small chance of a large loss), whereas a really bad overplay would be one where it's completely obvious that the opponent can just capture that one stone in sente without giving you any compensation (almost 100 percent chance of a small loss).

Playing slight overplays can be like a reverse lottery, where you get paid for each ticket you take, but each one gives you a small chance of a large financial loss. That's why you play them when you're behind.

Anyway, Bill, I know your remark was meant to be tongue in cheek, but I thought it raised a real issue worth commenting on.

One more thing to add is that you don't learn much by playing underplays; you just lose a game by 10 points, and you aren't sure why. Playing overplays is instructive. When you get punished, you learn something. You'll never find the line between the two if you always play under it... if you overplay constantly, your overplays will get smaller and smaller as you learn, until you find yourself playing right on that fine line of "good play", or at least close to it.

Charles Matthews The same comment applies to wishy-washy, tepid plays of the type the Japanese call nurui. In fact, to try to clarify the terms a little, perhaps nurui stands in relation to the idea of vital point in the same way as small plays stand in relation to the big points; both types back off too much and can be called underplays.

Cazort Isn't there a difference too between an overplay that has a clear way to be exploited, and one that in theory could be exploited but in reality creates a situation so complex that it has a big chance of working? I've seen some pro games in which there is an extremely complex situation where someone invades territory in a complex situation and lives--and then later analysis of the game shows that the group could have been killed by proper play--but the mistake was so complex that it was hard to spot. Is this overplay? Or should there be a new term for it? I think there is a big difference...

puripuri: (in reply to above) Something like that can be looked up for reference information, but it's insensitive to label those as mistakes and errors (IMO). The "killing move" was not played, so presenting it afterwards is just a curiosity, an academic what-if. What if there was another move that makes it live even after that killing move? There's no end to this road.

I have to say, that overplay is too hard concept for me to really understand. I'd like to say that everyone does only overplays in every game after move 10, and the winner is the one who punishes the other more for their mistakes. This naturally greatly depends on how exactly "overplay" is understood... 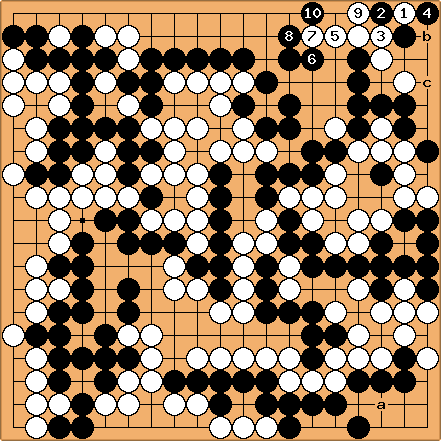 Chris Hayashida: I started thinking a lot about overplays during as I have been playing. I teach a beginner's night. When playing with beginners, and I try not to make overplays as I think it is better to teach by example with honte play.

This past weekend, I played against my friend's dad. I was behind. I played

and through some squirming, managed to get ko in the corner. My opponent ignored my ko threat at a, and filled the ko. I ended up killing the group in the lower right as well as living in the upper right.

I knew when I played it that there's no way that the upper right corner should have lived, ko or otherwise.

should have been answered at b (or 3 Tderz), making

and c miai to kill. I won, but it sure felt lousy.

If this was a game against a beginner, I would have never thought of trying anything in the upper right. If this were a tournament game, I would have tried without question. But in a social game? We are playing a one-game kadoban (handicap changes with every win or loss) so the game is minorly important. I don't care about the win/loss ratio. My ultimate goal is for both of us to improve.

I don't know if I'm taking advantage of the fact that my opponent couldn't read it out (and thus justified in playing it.) When I used to take stones from him, he would not hesitate in trying to kill my corners. On the other hand, I don't know if my opponent would improve as fast if I "went easy" on him, and didn't attempt overplays like this. What do you guys think?

uurtamo: I think that it's totally reasonable to play a complicated move when the game is close, for any game. If it is easier for you to figure out the correct answer to the move, you're taking advantage of your skill level, which is fair.

It's considered polite not to play "unreasonable invasions" at my old club. However, once a new player is able to play the game with any level of facility, they will get the occasional test inside their giant territories just to make sure that they know what they're doing. Because the reality is that they need to learn how to defend those kind of moves, and polite territory play isn't how to learn that.

Among the more experienced players at this club, this almost never happens, except as a prelude to a horrifyingly complicated ko situation that they have planned in advance.

It would be really uncool to do this to someone who doesn't yet understand, say, what a ko threat is. Although this is exactly who I tend to play this kind of move against on KGS, because for some reason, you can easily reach 8k or so there without being able to evaluate the value of ko threats. :)

Jared: I've noticed a lot of people around my strength (3k) play many overplays. We watch stronger players games, and emulate their moves without reading them out. Winning is a matter of punishing them.

tapir: I have noticed this is valid for the low dan range as well.