I've placed this on a subpage because it really doesn't continue or deal with a Jotting, though discussion will be interesting and valuable.

Comments, review, jokes at my expense are all invited and appreciated. Please judge my opponent gently, as he probably does not read SL and cannot defend himself directly. 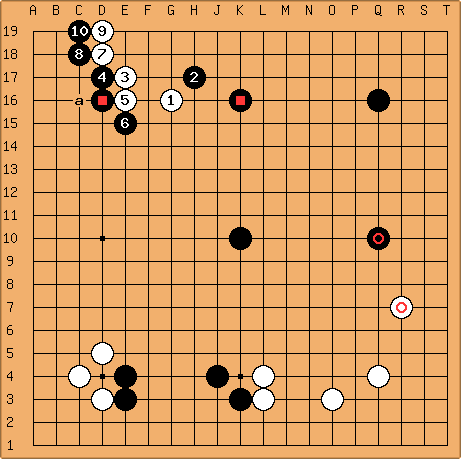 I'd started out playing conservatively, then decided to invade nakedjazz's top. One might argue that a more forward attack into the corner, at a, would have been more effective. Ahh, such is life. And death. And being a 20K...

1) A better place for White to invade is on the upper right side, because White may be able to put some pressure on the

stone because of the

stone reduces the effectiveness of that strength.

has no such help.

2) White's plan to make small life in between the

stones is not good. Black becomes too strong on either side, while White gains little. It is too early in the game for such desperation.

, while White makes larger gains. After such a maneuver,

may still have some aji that White can use. One possibility is to play

. That attachment gives Black a dilemma. Which side should he play on? The future is unclear. 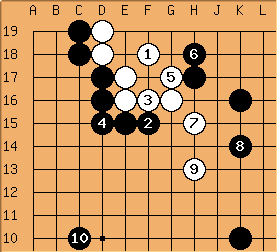 Having neatly blown my chances to invade the corner, I was now desperately trying to guarantee life to my fledgeling group.

At this point even nakedjazz saw nothing useful in continuing the local battle, but seized

at C-10 to hamper my attempts at invasion from below. 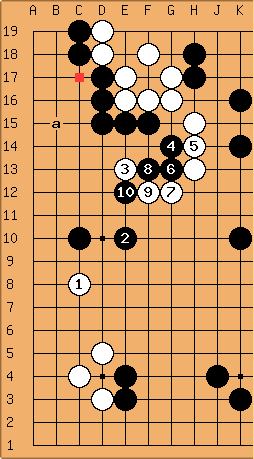 My concern here was for the group in the lower left. I wanted to establish moyo for it to grow into, and perhaps outwards. Everyone wants their children and moyos to grow outwards, no?

was a mistake. Yeah, yeah, the O got suckered in by a peep... but I connected the WRONG peep. My group on the top was alive, I didn't need outside help for it; but I, even I, saw that juicy territory in the upper left, and wanted to invade it. Perhaps, a truly khutzpahdik[1] invasion at a would have been interesting, but I'm sure nakedjazz would have immediately connected at 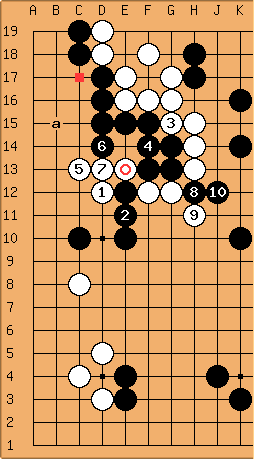 Watching these tight, small moves must be as painful to the higher (read: 16K and up) players as it is for me to review them.

Given that I know about invading with a keima -- heck, that's what started this discussion -- why didn't I do move 54 (

) at a, and LET him threaten

Now, at this point, he may have been quick to connect at

to prevent my slaughtering his corner... only to leave open a whole soft underbelly of nice profit for me to expand into.

In fact, it's possible, thanks to 20-20 hindsight over here, that I might just have been able to take the whole corner anyway, seeing as how the black group is almost totally surrounded and helpless anyway, and butting up against a live White group to boot. 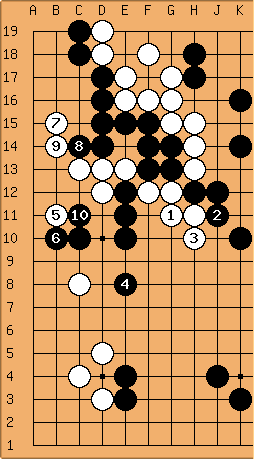 And it goes on, and on... I ALMOST want to take some area along the side, it seems, but I have such a strange way of not going about it. Then comes the absolute capper, a world-class (well, 30K class) fashlah[2]... 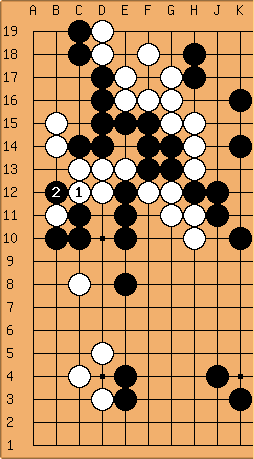 instead of W at

... I mean, they could have lived! I'd chalk it up to a "clicko", but I'd be more honest in naming that a royal thinko. 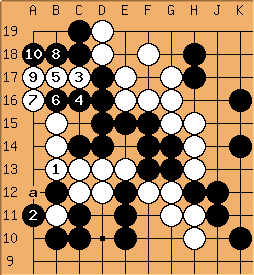 LukeNine45: I don't think it's a complete disaster for you. (if black omits

at a lives) I could have made a mistake, but I think this works. 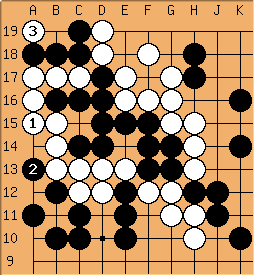 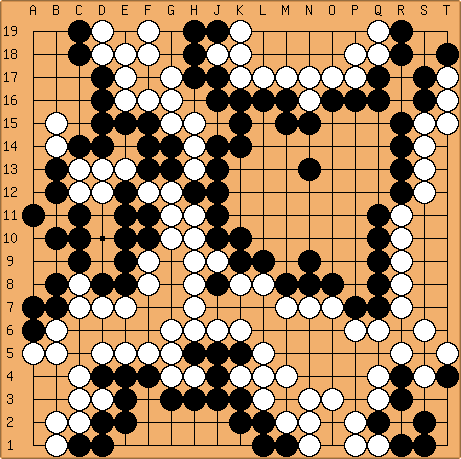 If anyone's interested, this is how the game ended up. Could I yet have taken that upper left corner, even after my "masterstroke"?

LukeNine45: Unless I'm hallucinating this gets you an extra few points 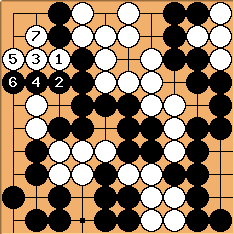 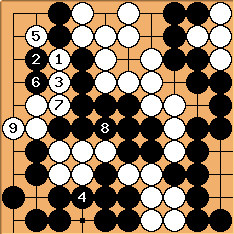 Hopefully even after playing the bad

black would realize that

[1] khutzpahdik -- hebrew/yiddish for nervy or rude -- anyone know the Japanese or Go equivalent? The noun form, by the way, is khutzpah -- O