Comments: it's desired to have a notation both systematic and dense. Density is maximized by having the notation be internally meaningless, with the meanings supplied by an external table, as in Charles' or Tamsin's proposals, or by say referring to page numbers in a standard reference. Internally meaningful notations, like Dieter's, end up looking like a more compact version of SGF. It's easier to be systematic, and doesn't require a table to figure out what a notation means, but won't end up being compact. Being systematic with a meaningless notation will require updating the table to add new meanings as they arise, but I think this is an acceptable tradeoff.

Something along the lines of Charles' proposal looks like it would be the most compact. When single letters run out, multi-letter combinations can be used,

Huffman coding style. Charles has made steps in this direction by picking the earliest letters in order of the most popular sequences. --DougRidgway

The systematic naming would serve as an alias rather than as a page name. The Big advantage I see is that there are no gaps and no bottlenecks in the system, and that obsolete joseki can be cancelled out without creating gaps. Popularity changes, so naming cannot take that into account. And of course, the internal meaningfulness is the biggest asset.

DougRidgway: As a more complex example, consider the following position, taken from Kogo's joseki dictionary, which is reachable from the taisha. The path to reach this position is sixty-nine moves long. At three characters per move, the string describing this position would require several lines to write. Even one character per move is too much. I'd like to be able to refer to this position with less than, oh say 10 characters or so. 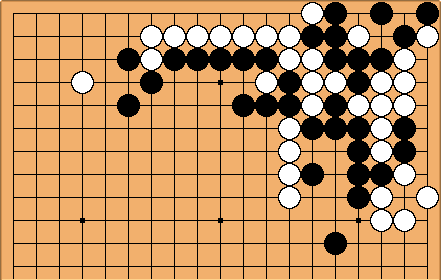 Charles A quotation from the book[1] I was reading last night seems apposite:

...in any project we design and develop, the size and degree of complexity of the information control systems inscribed in it are the crucial factors, so that the all-embracing and absolute perfection of the concept can in practice coincide, indeed ultimately must coincide, with its chronic dysfunction and constitutional instability.

Perhaps we should be reasonable.