I am black. I would be happy to hear the comments of other people. :) I am going to point out the moves that I can tell are bad. Please take my comments with a grain or three of salt as I am only 18 kyu. :) I would be especially interested in mistakes I made that I didn't point out here.

(Note that this was a fairly quick game. But I should have been able to avoid many of these mistakes regardless.)

here is the game record. White is guidji on KGS. 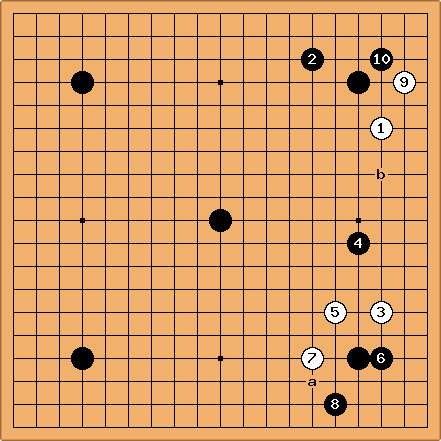 . I think it should have been at

or a. I would have to agree with that assessment. 6 is played to keep the corner, but it allows

entombing the black stones and forcing the sad looking

Rich: In this situation,

. You're extending along the side on the fourth line, and white still has to make a base. Also, given the presence of

, I would have played B0 at 'b' and swapped the corner for splitting white's groups and linking up stones.

is where you went wrong; this is exactly the kind of move that white is hoping you will play in a handicap game, so white can pressure this stone and tempt you into a fight that white, with better reading and concepts of shape, is going to win.

also coordinates poorly with your center stone handicap. Just play in the center of symmetry if you need to play here (one line higher than where you played).

kokiri I'm not sure i agree with that. playing

leaves a great move at b for black if you can get that in and the stone at tengen is well placed to run to if need be.

Rich: For what it's worth, I like the two-space high pincer in 4- and 5- handicap games for this reason, and have a good record with it. It cramps white more than the 10-4, but still works with the handicap stones' purpose; especially if white chooses the one-space jump out, you either end in sente or his group has a very shaky base. But yes, it is important to treat the pincer lightly and make the stone work for you.

LukeNine45: Thanks everyone for your comments! I learned a lot from my mistakes in this game. :) 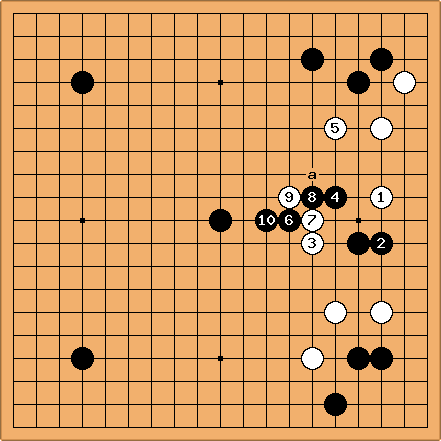 is bad and I should have atari'd either

should (IMO) have been towards the centre, or tenuki. 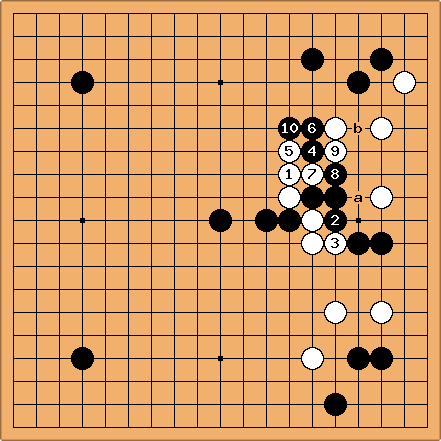 I don't think I did anything terrible here, considering the situation (but see the next diagram and comment).

is questionable. It looks like you're trying to connect your stones, but then you don't respond to

. You'd be better off without this exchange, because in extremis, you can still abandon the lower pair. If you want to connect, play

at a, putting pressure on the White stone.

For a similar reason, I would play

. It shores up your connection to

, and gives chances to come out at

or at b. The sequences

in this diagram and

in the last diagram suggest you should be more wary of playing keima when there are stones about. Knight's moves are fine connections in the absence of other stones, but when the other player has stones nearby, you need to check whether he can push through.

LukeNine45: Yes, I can see how those would have been quite a bit better. Thanks for pointing that out. 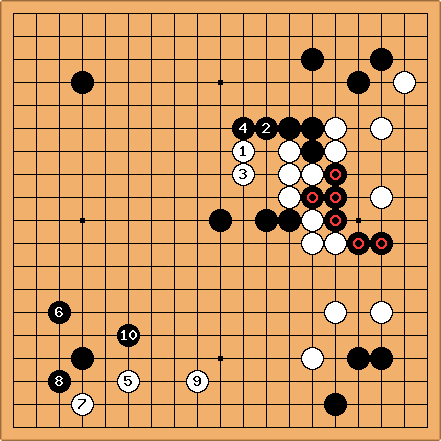 After 1-4, I decided that the marked stones of mine were pretty dead. I think now I should have either made that call sooner, or tried harder to save them. 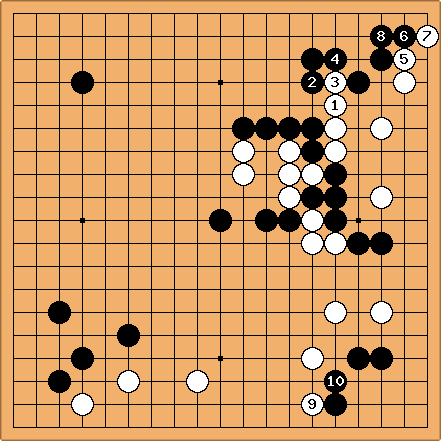 in that way to try and avoid squeezing out the toothpaste. I didn't play

because I thought White might have a tactic to take the corner because of my unconnected stones. I'm not 100% sure those were good moves or reasons. :)

I'm not sure if

was necessary, but I didn't want the corner to die, since I disconnected it from the rest of the board early in the game. :) 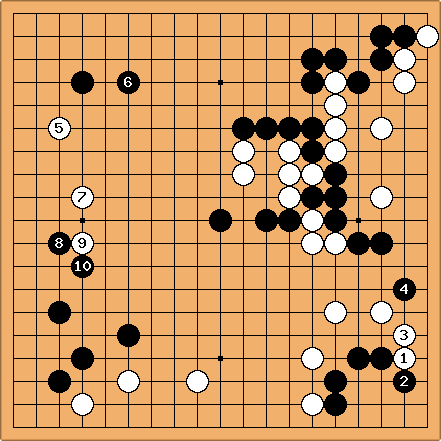 was a pointless move, or anyway, White thought so. Perhaps

? I don't know how to deal with that situation. 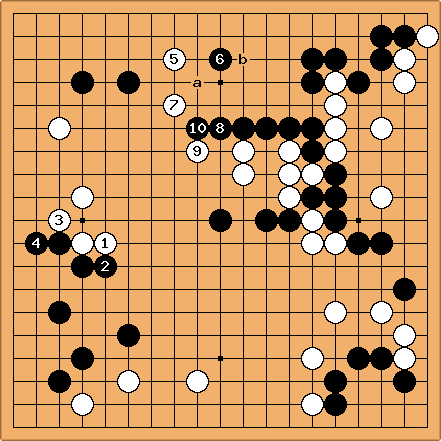 was perhaps the most disturbing move in the game for me. It seems Black needs a move at a or thereabouts before he can think of the top as secure territory (even that might not be enough).

is great because extending to b or connecting with

Rich: In this case, I'd have played the other way, and kept your stones connected.

Rich: Yes, it's a SplittingAttack - white then has two weak groups to defend - maybe even the left side group too, depending how it develops. Many of your subsequent plays around here will be multi-purpose. If you can keep weak groups apart, you'll win a lot of handicap games. 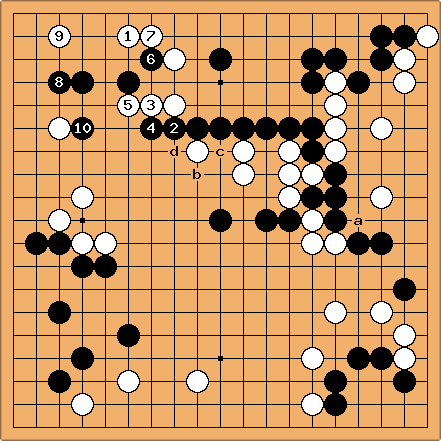 Black makes a nice wall which isn't good for anything, while White eats half his territory. I was trying to kill the white invasion, but after these moves, I'll be doing well if I don't loose the entire corner.

Rich: On the other hand, connecting around 'a' looks interesting for attacking; a play at 'b' makes miai of 'c' and 'd' and you've cut the group off. So white has to run in the centre, and you build up strength to attack the groups around it!

LukeNine45: That never even occurred to me, it's definitely something I should have at least thought about! I would have had a lot less trouble later on. :)

Rich: Tesuji like this are easily-spotted when you know what to look for and difficult when you've never seen them :) If you haven't already, I'd definitely suggest reading Tesuji by James Davies - you're at a level to really get a lot out of it. 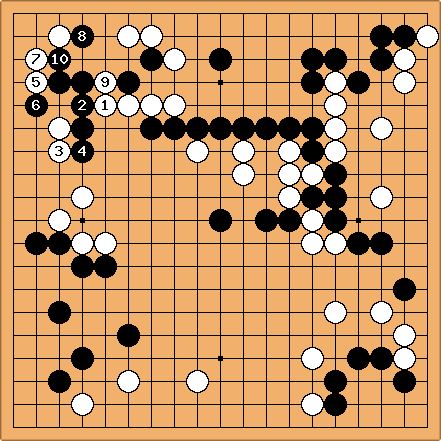 Despite my best efforts, Black manages to save a few stones out of the corner. 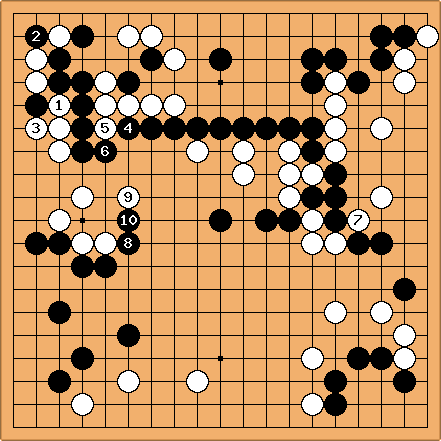 , they make the center look better for black.

puzzled me at the time. It's there in case there's a capturing race in the center, she'll be able to kill that dead group to connect all her stones out in time. 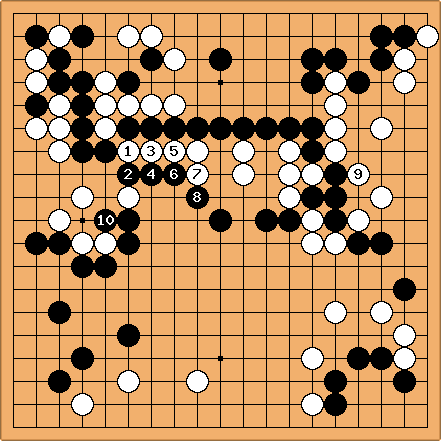 Here we play out the first section of that capturing race. :)

is not bad, it gives me another way to connect with my stones on the top right. 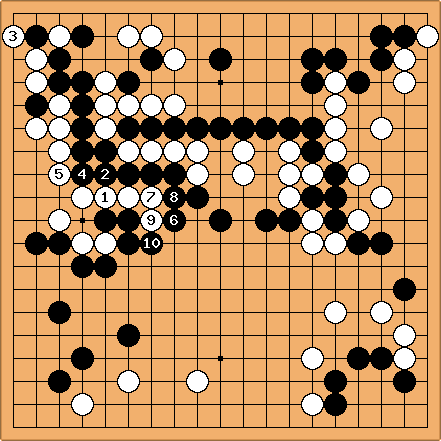 After this, it's not that interesting. Here is the final position. I resigned because the librarian was kicking me off the computer, but I should have anyway because I was way behind. 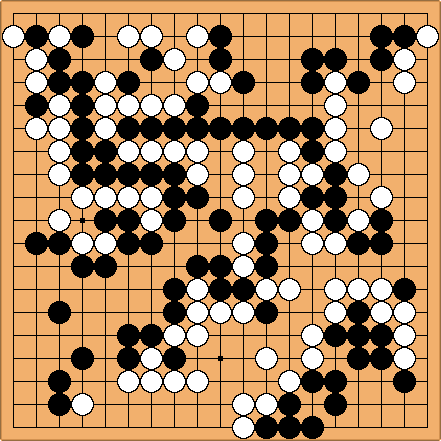