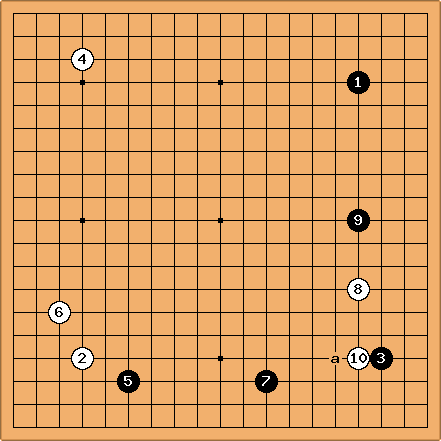 completes an opening pattern by Black known as the micro Chinese opening.

would ordinarily be at a. 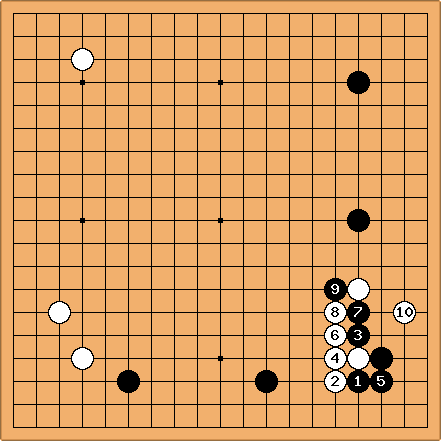 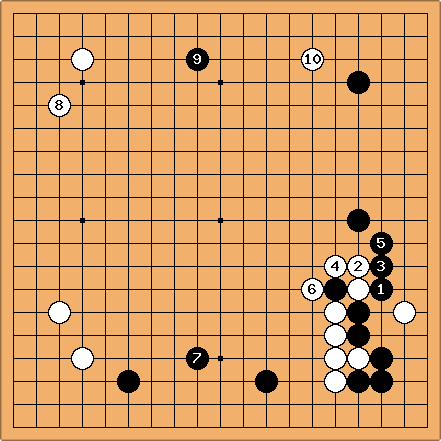 , most amateurs will feel that White's influence at the bottom is strongly reduced by Black's three stone formation there, while Black has made a big side territory so that the opening is favourable for Black. However, An Younggil from gogameguru states that professional evaluation of this situation is even, because White has created a thick group in what was formerly Black's sphere of influence and Black's three stones are weaker than they appear. 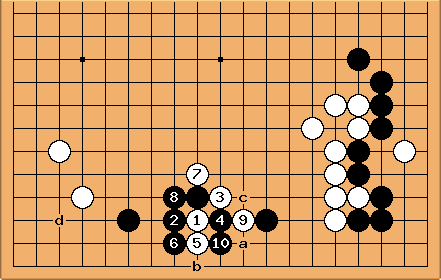 For example: White can atach underneath and cut off a stone (a-b-c follow). As Black can then enter the corner at d, this may not be a good scenario for White. (I am an amateur myself and I largely prefer Black here) 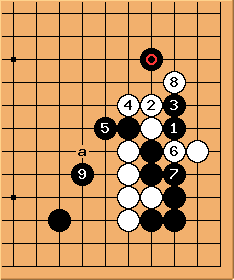 pulls out, then White captures two stones at the right side. The question is now if

can capture the 5 white stones. Black's corner is weak though and the outside has many cutting points. With

having become meaningless, the trade is not good for Black. 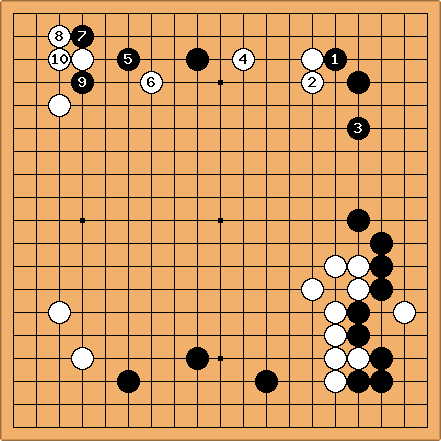 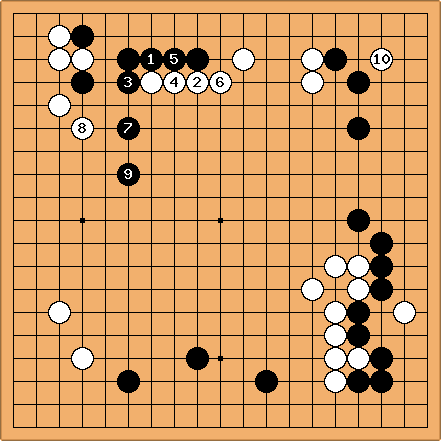 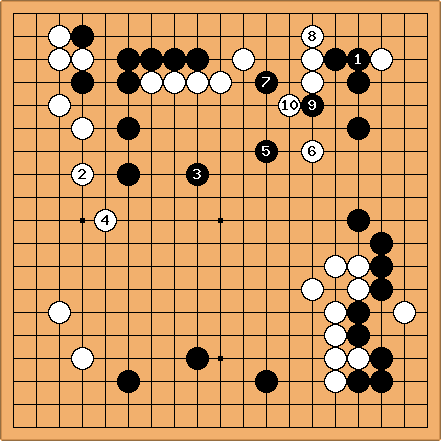 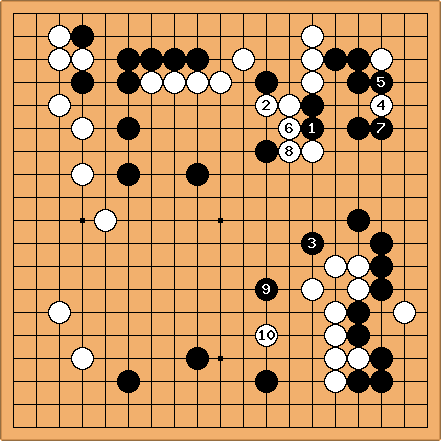 tries to develop a moyo while attacking the shape of the white group below. White doesn't respond to the pressure below but instead plays

to either revive the corner or achieve the connection at

and destroy the moyo potential. To understand why Black can't cut with

here because the corner will be captured. This means White can effectively separate the corner. The game result is painful but less destructive. 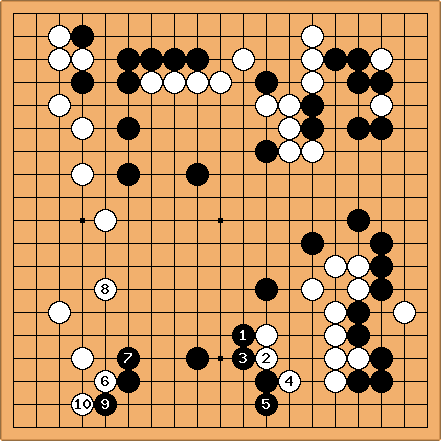 In his preliminary analysis, An Younggil finds

(76) to be questionable and recommends a instead (see next diagram).

is the illustrous six point double sente diagonal. Assuming it is sente for both players, meaning it either undermines the life of a group or threatens to destroy a territory which is in itself larger than the points they are fighting for at this stage of the endgame, the difference between either player occupying this point, is 6 points, given the remainder of the endgame.

unkx80: Quite a bit bigger than 6 points, because Black actually attaches at b instead of playing at

, which is a move with opening or middle game flavour, as it claims a hitherto loosely claimed territory, while pressuring Black's group.

Another question is why this would be so at this moment in time. This question is a bit easier to answer: Black has just reinforced himself at the bottom, so the value the pressure at

contributes to its overall value is lower.

That probably helps understanding why the suggested

here is better: it puts pressure on Black's last weakish group. If Black answers locally at a then White gets the move indeed in sente and once committed to this eyespace, a move at b is likely to be sente too.

If Black plays in the centre, then the territory made by his top group has become very small, a and b being almost equivalent. Also, attacking that group in the centre may allow him to make more territory at the left side. 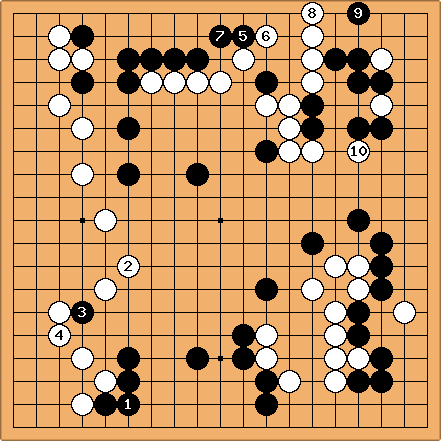 here was more than questionable: it was a mistake. Given the above analysis we can understand that playing at the top would help the left side or be big in itself, whule

exchange helped Black to remove any aji in the corner. So, why was it played?

Black may cut and squeeze. If

, Black gets a free atari at a. 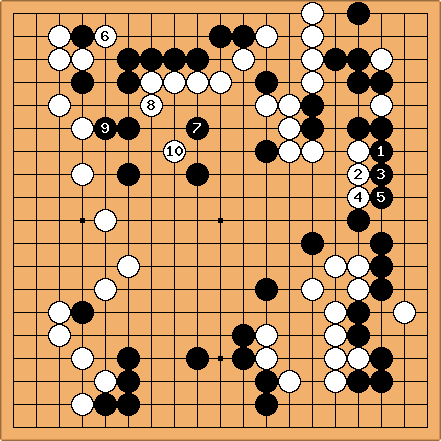 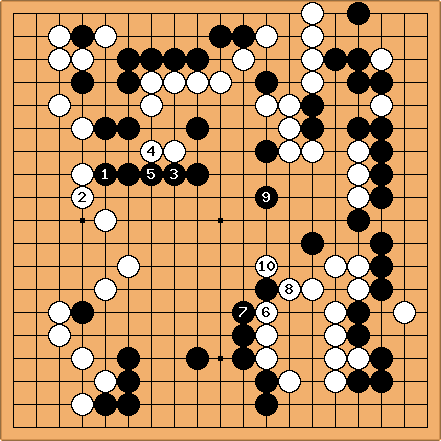 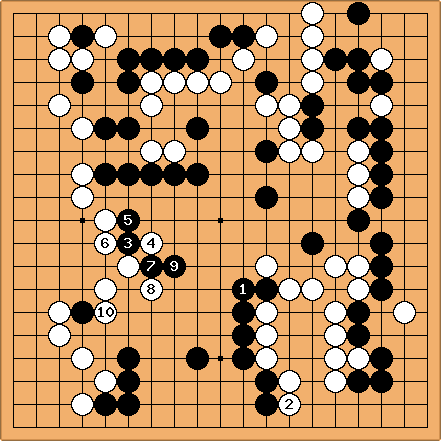 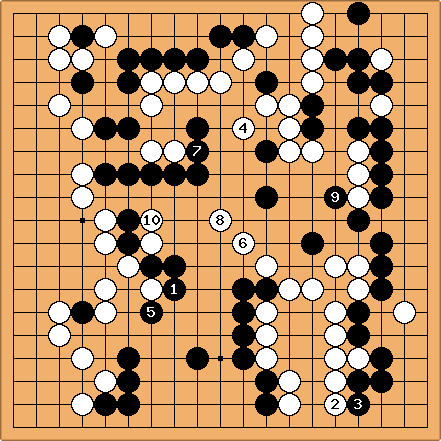 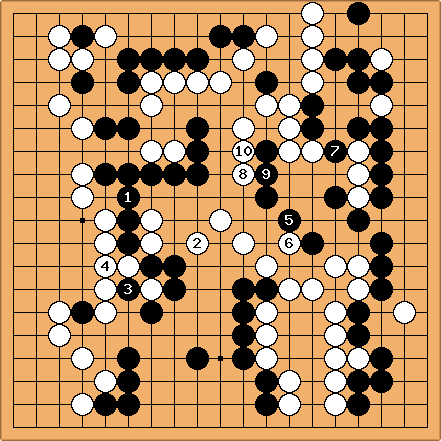 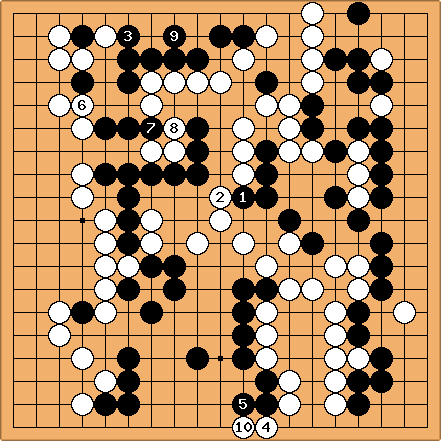 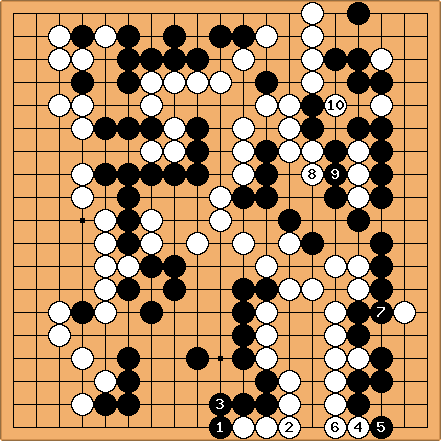 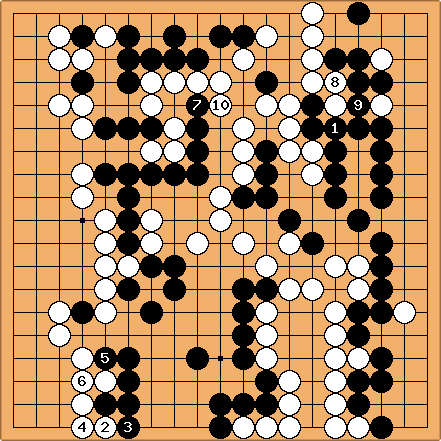 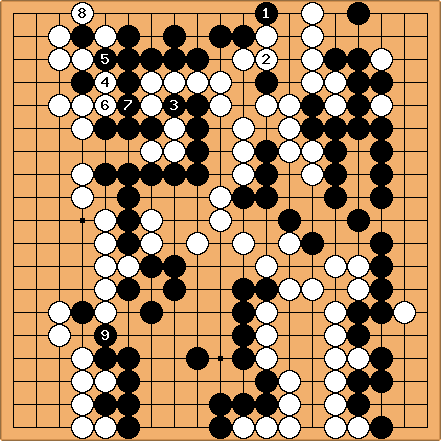