This is the second game in the ten game match between Lee Sedol and Gu Li, played in February 2014. As usual, the opening went well for Gu. Lee succeeded with two invasions and reversed the game. Then a ko, one of Gu's favourite instruments, leveled the game back again. In the early endgame, Gu was ahead but due to successive mistakes under time pressure in the late endgame, Lee pulled off a 1.5 point win. 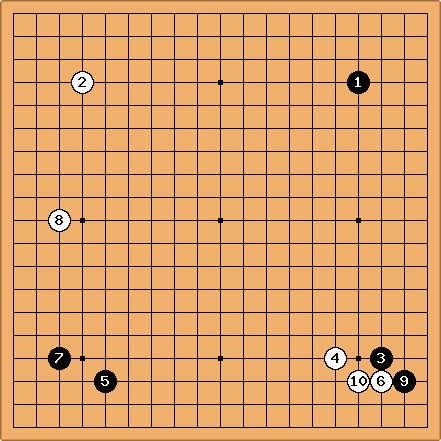 is a very active start. It was speculated that Lee played so actively because he could take a 2-0 lead now.

ignores and takes another corner.

is kind of forced because both corners have this as an ideal extension.

switches back to a common corner pattern. 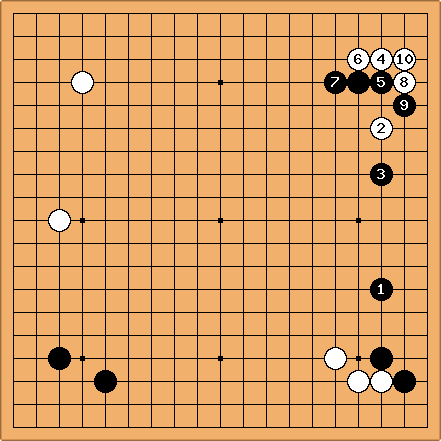 Chinese commentators thought that up to

things were running smoothly for Black. On the contrary,

is a negative move, breaking up Black's side. Then 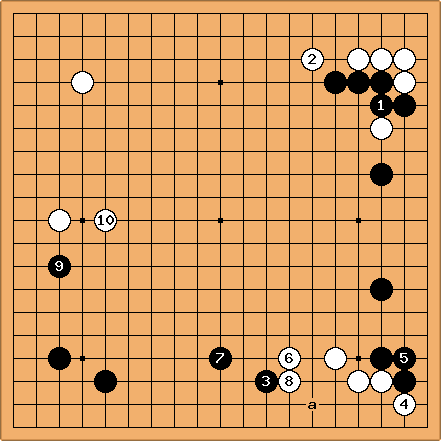 are the most common of 4-4 point joseki.

could also be played one line higher.

was applauded by the commentators as a move typical of Gu Li's intuition. It makes miai of

and sliding under at a. So when Lee defended at 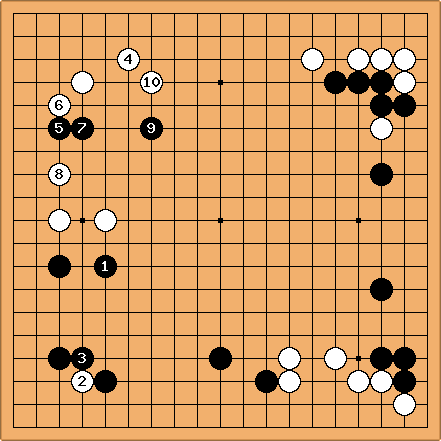 is a probe, which answered this way leaves aji at the bottom. If answered below, then there would be aji in the centre.

builds up a wide upper right and

naturally invades, which more or less marks the end of the opening and the start of the middle game.

We are observing a very different game than game one, where the players plunged into the middle game very early and many different unstable groups spread across the board. This game here has a more old fashioned flavour, both players carefully staking out potential territory and reinforcing. 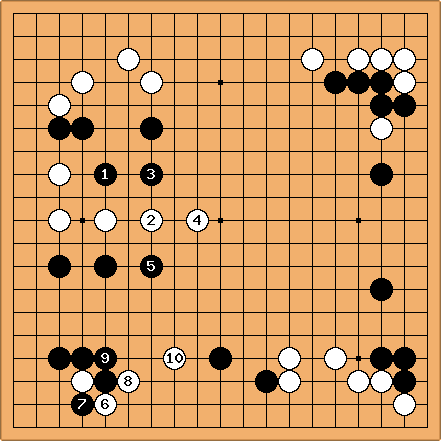 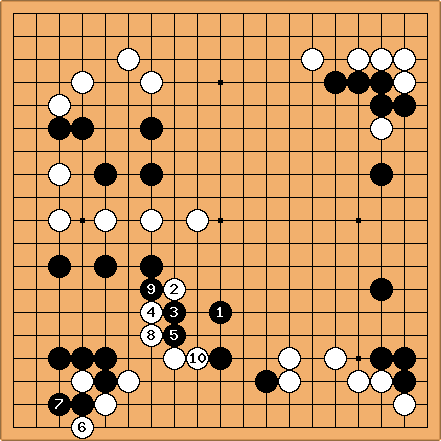 was questioned (allow hane at the head). 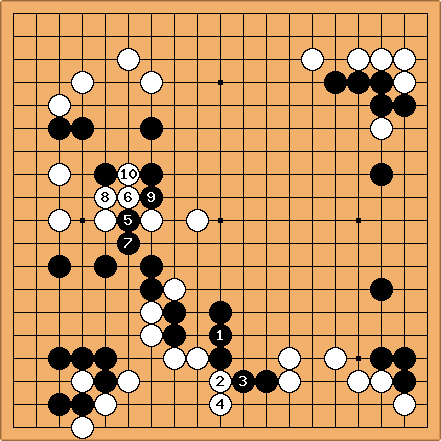 and White continues to live easily at the bottom. Black had been targeting

here for some time, cutting of the left side. 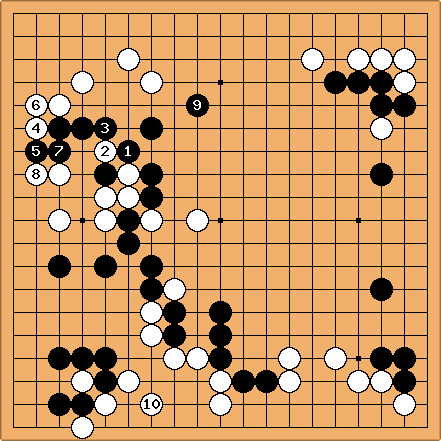 However, Lee again managed to live easily at the left. Black's play seems to lack some power in this game. 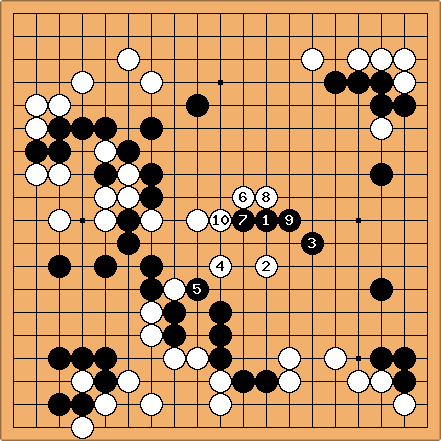 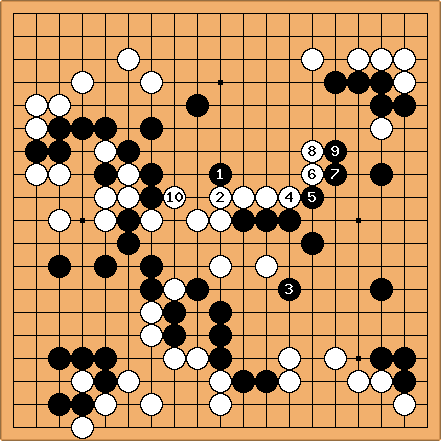 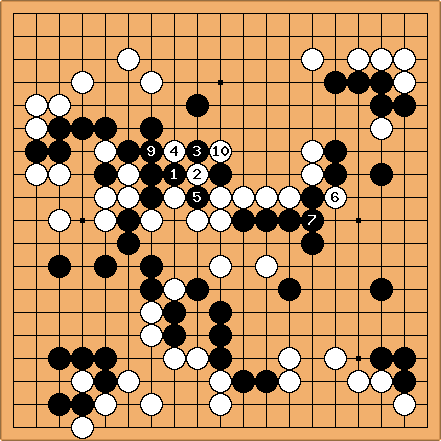 chooses the difficult road of a ko. According to the professional commentators, at this point Lee could have kept the game simple. 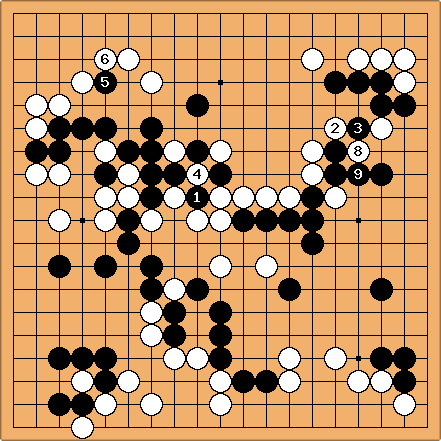 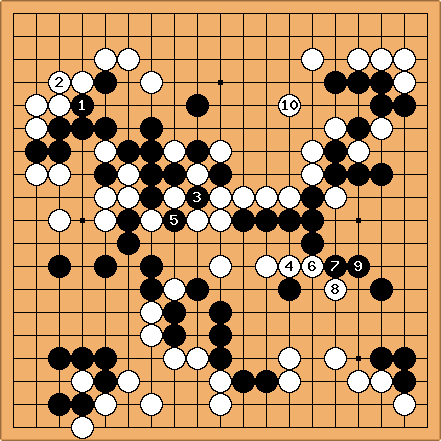 is not very big as a ko threat. With

, Black becomes very thick. According to the pros, this thickness should give him the advantage in the endgame.

, all big groups are stable. There is some open area left at the top but it is not big so we can arguably state that the endgame has begun. 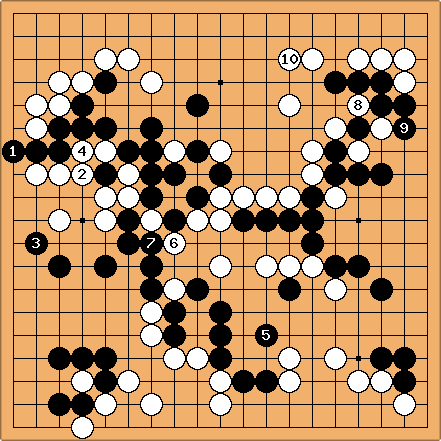 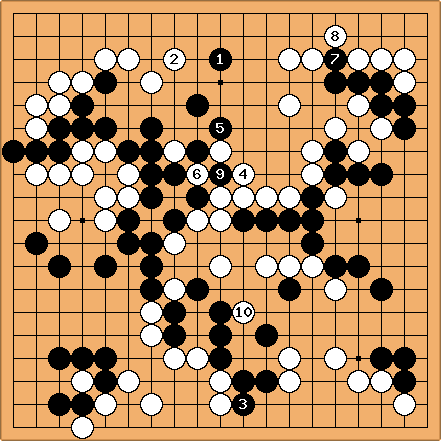 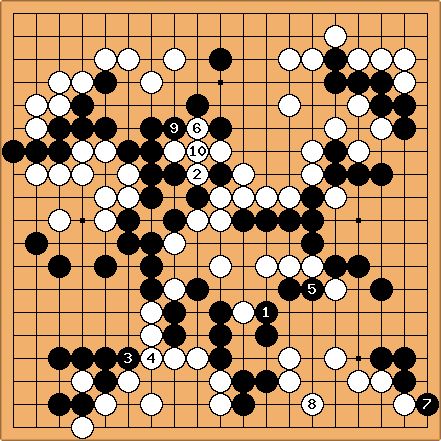 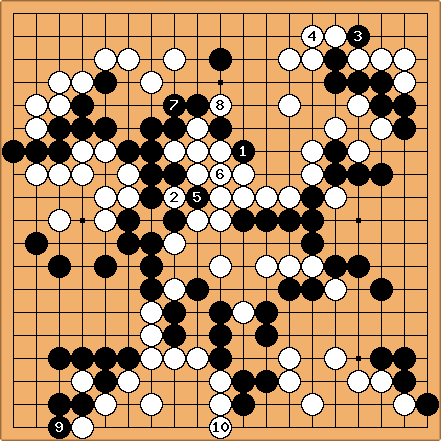 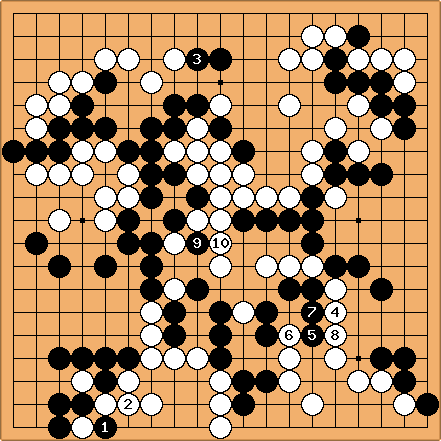 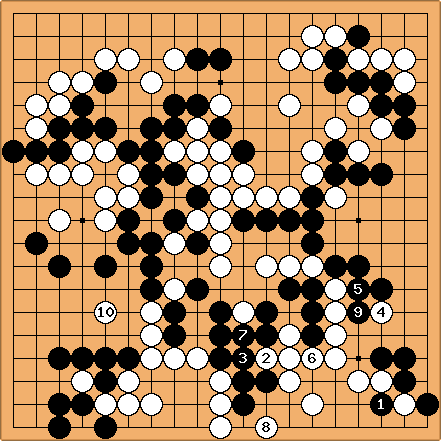 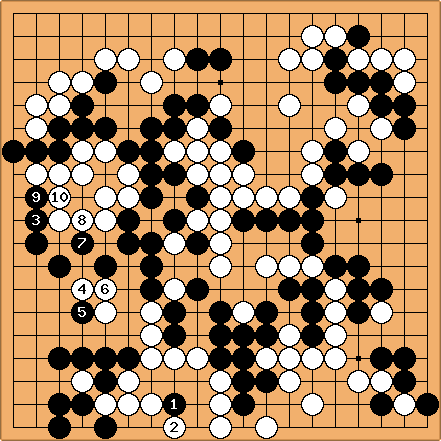 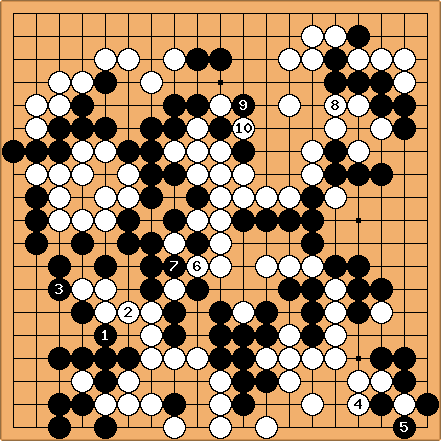 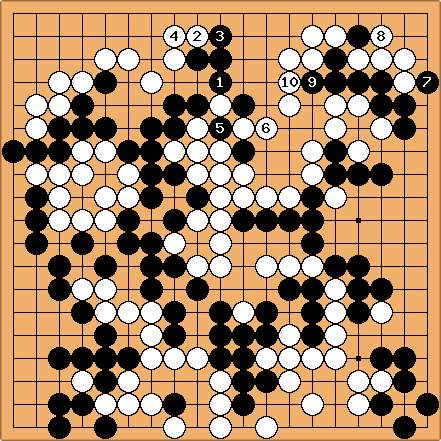 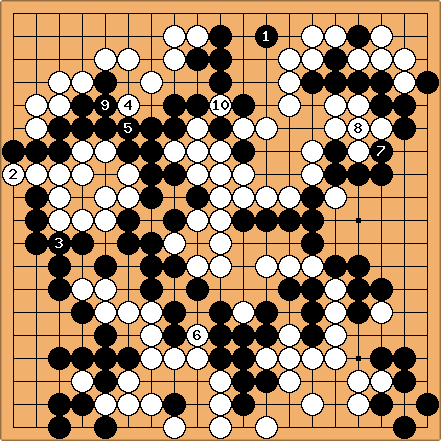 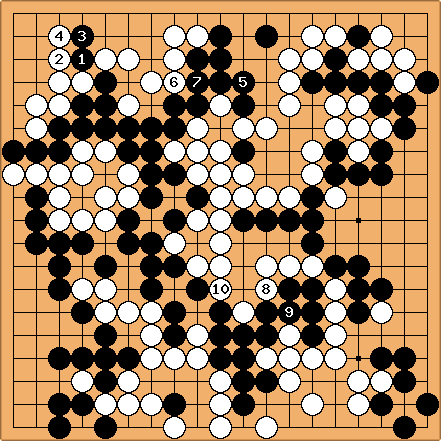 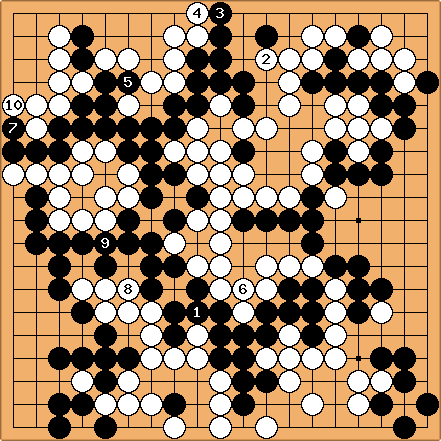 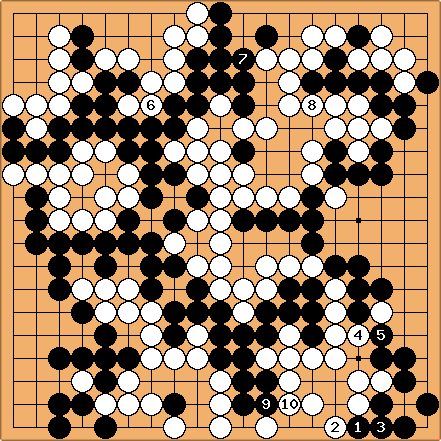 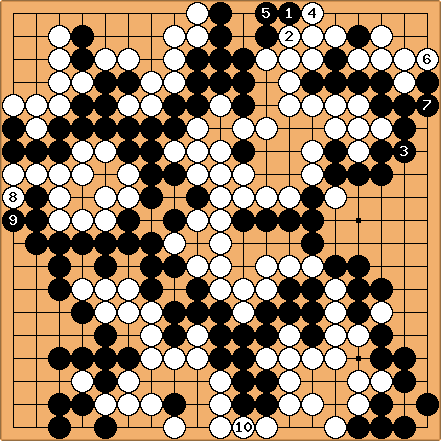 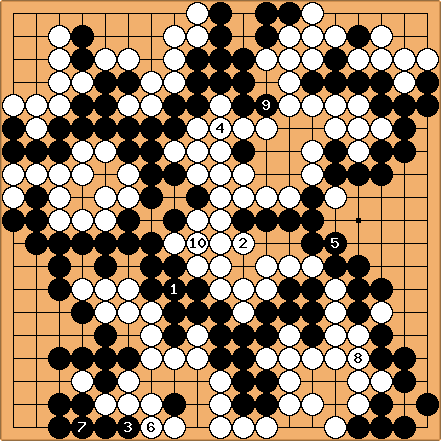 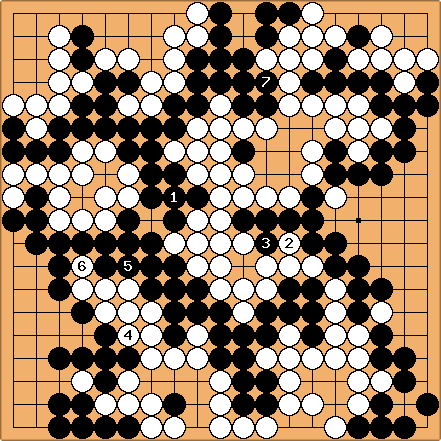