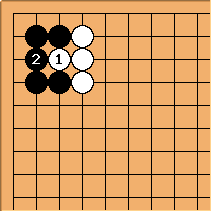 What if the joint were one stone longer and one line further apart? 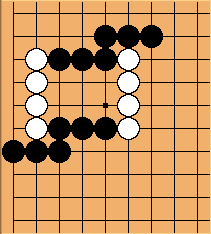 Alex Weldon: The 3x2 one works. Only two things White can try. 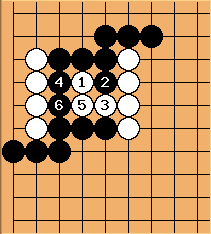 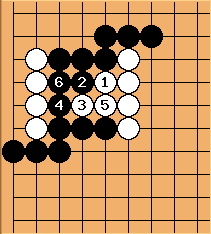 Of course, just like the regular bamboo joint, damezumari can become an issue. I don't know how big it can go, but it's mostly an academic issue, because I doubt that good play by both sides could often lead to these "large bamboo joint" shapes.

(Sebastian:) Liberties are even more important than in the 2x1 bamboo joint. If one of Black's sides is all sealed off (similar to a crane's nest) then the connection does not work.

Dieter: What you are actually looking for is the minimal breadth for a given width.

JoelR: When I saw this title, I assumed I was going to see:

I've seen this in a few games, and unless White is already strong in the area, it's quite effective. Are there any useful comments on this?

ndkrempel?: It is solidly connected unless White has any one of the marked points below, which may enable a keima or push to cut:

ndkrempel?: It is solidly connected unless White has any one of the marked points below, which may enable a keima or push to cut:

JohnMoser: I believe White needs two points if a ladder is possible or if you are very close to the edge, 3 points away to be precise. See the below.

Uberdude Sure, the study of the connectedness of shapes is done under pessimistic assumptions, i.e. in the centre of the board, no friendly stones nearby and no ladders in your favour. When we say the bamboo joint is connected with miai of the 2 points within that means absolutely nothing anywhere else threatens to cut so there is no bad aji that could be exploited by more stones appearing neaby from other fighting being double purpose moves.

JohnMoser: Yes of course; however, knowing when to apply "bad shape" given other assumptions-- that you can form ladders; that you can do this near the edge of the board (and thus that nearby stones may turn bad shape into good shape-- further study often reveals other shapes by putting the pieces together), and the like-- gives you a POWERFUL tool for playing. If for example you know this is safe at the edge, you can ignore a peep; if you also know that 3 from the side is safe, and that it's still safe with 1 or 2 enemy stones out there to "help" cut it, then you can ignore a few plays by an unskilled amateur. Also, you can avoid attacking such a shape until you have a better base (i.e. invasion behind it that's failing, so cut through NOW).

Here White must connect at A or extend at B or be trapped in a Tiger's Mouth.

Here white MUST play A, thus.

Uberdude This is the way to cut.

Black 8 traps White 7 in a ladder. Note the play at

is correct, as if black plays as follows:

Black should also play A as soon as possible. If white has no ladder breaker, though, this is acceptable: B provides a defense against attacks and is the immediate response to White playing a ladder breaker.

If white has a ladder breaker, Black should abandon the full triangle up top after 8 and protect at A; unless there are nearby Black stones, in which case 10 may provide Black with influence and eye potential: 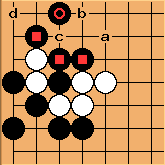 Because of the marked stone at (o), The upper stones have some strength to connect, or form a turtle back. A play at D forms a Lion's Mouth, further strengthening these stones.

Black can also net at

. Here White will cut the lower half:

This allows Black to sacrifice the lower stones rather than the upper in case of a ladder breaker. Note that in this position, with

up to 3 spaces from the edge, black can consider this connected; otherwise it's not. 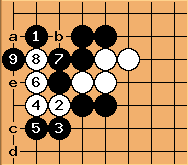 Notice that A and B are Tiger's Mouths not in Atari. White C gets black D, leaving White C in Atari. So 3 from the edge, this is connected. 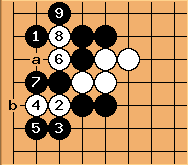 Here White meets Atari at A and B. Clearly, White has no way to cut these stones unless the wide bamboo joint is made further from the edge or with white stones in the area of play shown.

If White peeps at

, Black can connect at A or capture-and-connect at B. A White peep at B creates an even worse situation, leaving Black a way to extend out a little and reduce White territory on either side. White B to connect here looks like the better move after the peep at 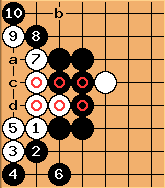 White needs to play A, Black B. This creates a Snapback, however, if Black plays C or D. 3 and White can't live inside... 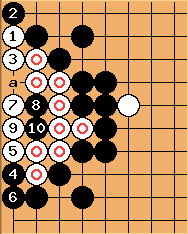 Black at A captures; however Black has a weak spot at 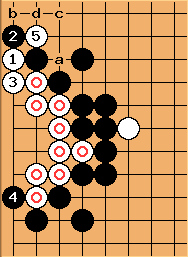 Here Black is in atari at A and B. Losing either is difficult: playing at B, black loses with White at A, and then Black at C can't protect the left group from atari at d. White can now run Black 3 steps, then do a one-point jump to capture. 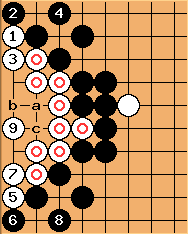 creates life: white at A or B produces 2 eyes, and likewise this is miai with 9 at B. Naturally, Black can't play in here to do anything but force the issue; Black can't even call this a Ko threat.

Thus, at 3 points away, White can live. Black should protect the edge side when threatened in this shape near the center (i.e. at least 3 points out).

ensures that a white peep at B or a white invasion at A can be met with a response. White extension at A met at C connects to the upper chain; a play at D then gets a tiger's mouth from B, putting it in Atari and requiring extension back or else the connection will be made by capture. White peep at B gets the tiger's mouth created by Black at D, ensuring a solid connection.