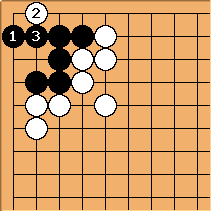 Black can live by playing on the 1-2 point as shown. 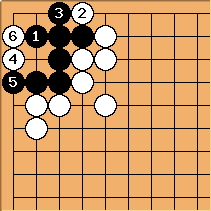 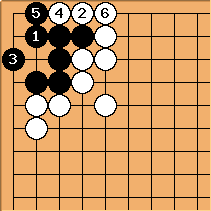 Please correct me if I've gotten any of this wrong =).

Bill: As shown above, by playing on the 1-2 point Black secures two eyes, defensible under attack. 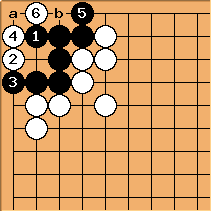 on the 2-2 does not secure two eyes. White can continue to make seki or ko. (Here Black can still play at b to make ko, or he could have played

Best play depends on the circumstances, including ko threats. As a rule White can exploit Black's weaknessess after

. In this case, for instance, White can start with

. Black makes two eyes, but loses two points vs. playing one the 1-2 initially.

Generally speaking (not just limited to this case), when we decide which is the best move, what factors do we need to consider? 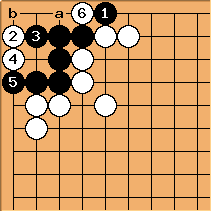 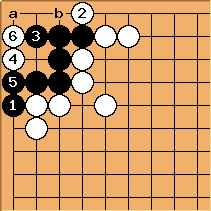 , a and b are miai. Black is dead. Edge hanes don't make life. 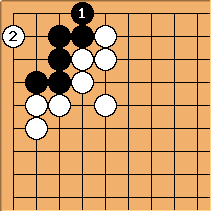 Jhyn I'm surprised that nobody considered the descent, since the hane does not work for Black (this is the move that threatens to destroy the most territory outside). White 2 seems to be the most severe attack. Actually, I found somewhere a L&D problem starting after White 2 stating that B was dead unconditionally. 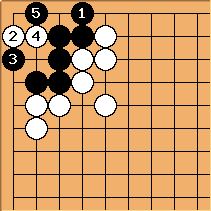 However, I can't find anything wrong with this sequence. With less liberties it might turn out to be seki. Any insight? 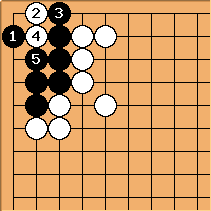 Erock: Can Black also live by playing the 1-2 point? 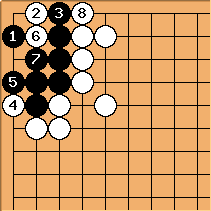 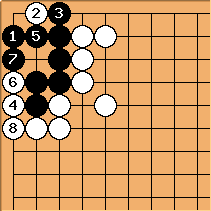 Jared Beck: If Black chooses to give up a few points, he doesn't have to suffer the burden of a fourth ko threat.

Jared Beck: Please double-check this, I just looked at it briefly. 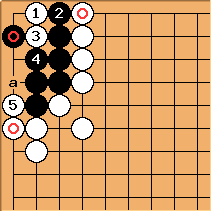 Chris Hayashida: The problem with the 1-2 point is descending on both sides (marked stones) threatens to kill the group. This isn't the case if

was played correctly at the 2-2 point. Black cannot play at a for his second eye since it is self-atari. 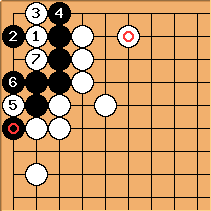 shinkenjoe The text says the marked stone is important. Isn´t it the other white security stone? 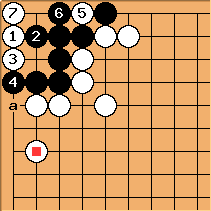 zinger: Can white kill black regardless of the marked stone with the 2-1 placement?

unkx80: Well, depends on whether Black can get the hane at a in sente.