lavalyn says that unkx80 is starting to make the problems a little harder than "beginner" as Beginner Exercises should be.

heresiarch: What threw me on this problem was my desire to kill the black farmers hat group - which I couldn't for the life of me divine a suitable method. It doesn't say "white to kill," which for an astute player should suggest other outcomes, but for a new player like myself in a groove from the last few exercises, all I want to do is kill. Perhaps a note on the problem like "White to continue for life" or "White to continue" with a link to possible outcomes of exercises like this.

When figuring out real game problems, it's been useful for me to remember that my three options are killing attackers, making life, or connecting/running. Reminding that all options are viable in real games and are thus important to consider in these problems might also be a good idea. 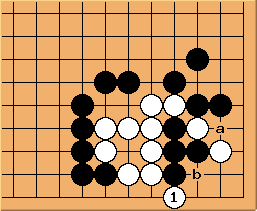 White prepares to connect with the corner and make an eye there. Because Black is in atari his response will be one of the two labelled points. 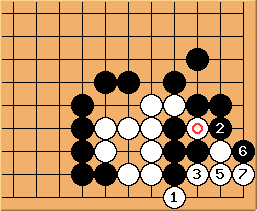 White lives after this sequence to

- one eye in the corner. 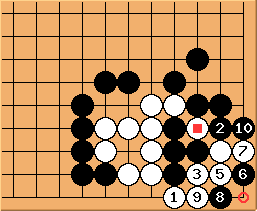 Should Black choose to resist in making the easy corner eye, two eyes form in the corner. 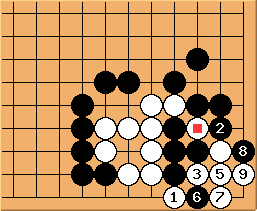 Throwing in doesn't work either. White will live again. 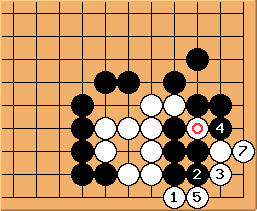 , by which time White is unconditionally alive. 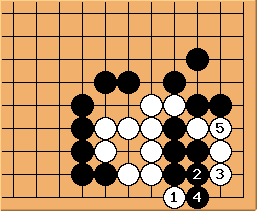 Black's stubbornness in keeping the two groups disconnected yields the death of the blockading group.

(xela: Because then black can later play at 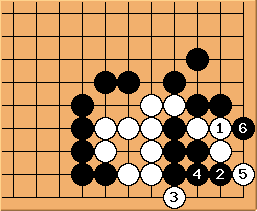 , because then the white stones die. 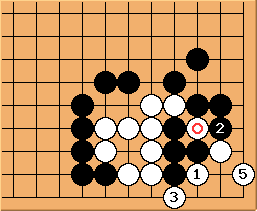 xela: I have a vague memory that Get Strong at the Endgame recommends this order of moves, although I can't understand why this should be any better than playing

. Perhaps my memory is wrong.

TimK: I think you're right about the shape, but shouldn't the order of 1 and 3 be reversed to avoid the ko? I think this is a bit better than the second diagram at the top.

xela: That is precisely my question: I think the book specifically recommends playing this

, either in this or a similar position. I think the reason is to avoid the "variation b" diagrams near the top of this page, but I can't work out why avoiding that is worth anything, as the corner territory seems to be the same in either case. 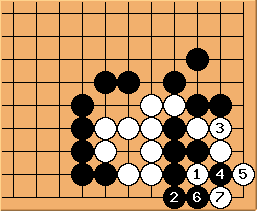 xela: If black resists at

, then white starts a ko this way.

unkx80: I am thinking, maybe I should move this problem to Kyu Exercises. The replacement exercise might be, where should