Steve Kroon: I have a question concerning problem 135 on the 25k-15k level from the Korean Problem Academy problems, available on GoBase.

The problem here requires you to make a dead 4 in the corner with your black stones so that White can't throw in and squeeze Black in such a way that he can't connect to form a bulky five (forgot the technical term for that trick). But that squeeze play is reliant on the 2 outside liberties White has. So although the plays where Black removes White's liberties from the outside are marked as wrong, I believe they should be marked as correct.

Comments/corrections, anyone (I'm around 5k).

unkx80: Could you or somebody else please post at least the diagram, and preferbly also the sequence of moves? I don't have a gobase account. 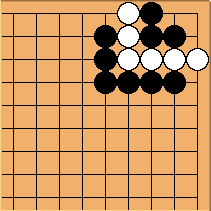 Is the square 4 solution potentially better because of fewer ko threats? 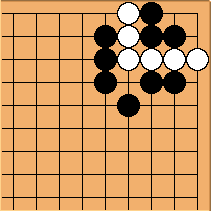 unkx80: Thanks nachtrabe... anyway, if the solution is to be unique, then this should be the diagram. In the original diagram, I do not prefer the square four solution because it leaves more liberties, and hence aji, for White. 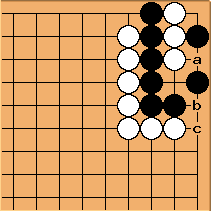 Query by Steve Kroon: The given solution connects at a creating a seki. But Black needn't play there yet: he can rather first connect the one stone on the right side to his larger group by playing at b (if he plays tenuki, a throw-in at the same point seems to lead to a ko for the life of the Black group. This move for Black also seems to lead to a seki, but Black's group ends with more aji to the outside, as well as more liberties.

Ed?: If black starts at 'b' white could still close of the right side in sente by playing 'c' so it gains no points. 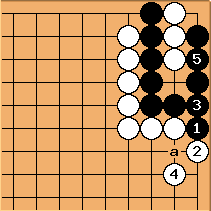 may take an extra point, but black should be careful since if black can't capture

after connecting (by playing 'a') he would be killed by

If white plays first, descending to 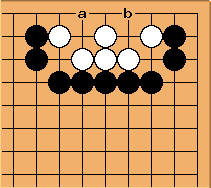 OneTrueCalculus: Gobase gives 'a' as the only valid solution, but I can't see how it's different from 'b'.

jedwardh: I came here because of the same problem. My reading says that they both lead to seki. If anyone can demonstrate that 'a' is better than 'b', I'd be very interested to see how.

I have a question concerning problem 178 on the 15k-5k level from the Korean Problem Academy problems, available on GoBase.

The position is shown here: 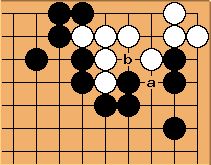 Bill: I suspect that there is another Black stone at a or b. 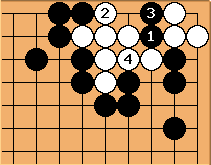 The solution given at gobase is

. But I cannot find the proper answer to

xela: I spent a long time looking at this, and came to the same conclusion: there is no way to kill white, with

or any other move. I think the problem diagram on gobase must be wrong. 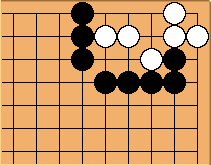 Ectospheno: Apparently whoever put the problems on gobase took some liberties and changed the positions in the book. Problem 178 is obviously inspired from the 178th problem in book two but isn't the actual problem. Most of the level two problems on gobase deviate from what is in the book. The book has this position (rotated to match gobase orientation): 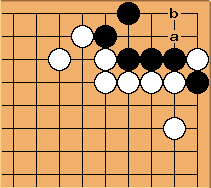 OneTrueCalculus: The solution given is a, but b also lives (with fewer points). 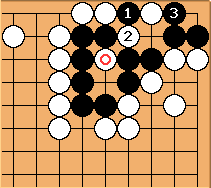 This is better than the given solution. Black gives up one stone, but leaves behind a two point gote to capture two White stones. Instead of 3 points of territory the count is 4 points (plus or minus 2 for the gote). Black is also better in terms of ko threats. 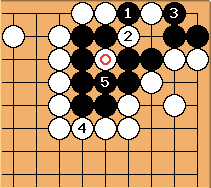 stone, your solution is one point worse than the given solution. The point you gain giving one stone for a potential two stones is given back with

. In addition, with the usual assumption that the surrounding area is White territory, you have lost the one point sente at 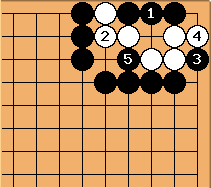 buggler: The solution on gobase includes the continuation of moves 4 and 5 but white is already dead after move 3 and black can ignore 4.