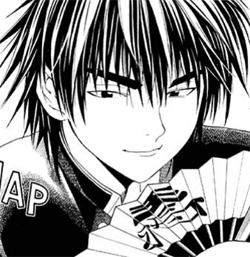 Tetsuo Kaga (加賀 鉄男 Kaga Tetsuo) is a character in the anime and manga series Hikaru no Go.

In Tetsuo's first appearance, Hikaru Shindo is at the Haze Middle School Fair solving (without Fujiwara-no-Sai's help) problems to win Toya Meijin's book. Tetsuo uses the goban to put out his cigarette (in the U.S. graphic novels and in all versions of the anime, this is changed to Tetsuo squishing gum on the board) and destroys the book. He then plays Hikaru (as Sai) and is impressed enough to come up with the idea of sneaking Hikaru into the tournament (Haze goes through to win the final, but is disqualified when found out Hikaru is only a 6th grader and ineligible).

Tetsuo encourages Hikaru to take the insei test, and to get Hikaru the three kifu needed, has Hikaru play a triple match vs. him (loss), Kimihiro Tsutsui (win), and Yuki Mitani (win). The inadvertant consequence of this is Yuki's quitting the club as well as Hikaru.

Also Haze Middle School's strongest shogi player and head of the shogi club before graduation, early on Kaga pretended to hate Go (actually forced into the game by his father). The main reason being as a kid, he played Akira Toya and only won because Akira let him win to avoid Tetsuo's father throwing him out of the house. Tetsuo was appearantly at one time an insei himself.

Tetsuo's voice actor (seiyu) in the Japanese version of the anime is Kentaro Ito. In the English version his voice actor is Andrew Toth.