Tamsin: If you cannot find an explanation of a Japanese go term elsewhere on Sensei's Library, then here is a forum in which to ask. Please check using search before asking here and please delete queries/answers once each term gets defined on another page (either its own or in part of a large discussion).

Herman: I'm currently trying to learn Japanese through a course at the university, together with ElDraco. Go terms make interesting topics for discussion in this context, but recently we ran in to one that we simply couldn't find or translate. Can anyone tell us what the origin/meaning of the word komi is? We tried looking up different variations of the word in "kanji & kana", but to no avail. Also, we are interested in the origin and meaning of the word uchikomi , which seems to have several meanings (in Go it can mean "invasion" or "beating down", but I also found references to it as a training technique in martial arts).

Gareth: uchikomi 打ち込み means "driving; pounding in; shooting into; falling badly in love; putting one's heart into" according to

Jasonred Once again, I prove my ignorance, by asking how you say "stone". I know it's this character: 石, but is it pronounced seki as in jouseki and fuseki, or ishi as in goishi?

exswoo: Kanji have multiple readings in Japanese. The kanji for stone can be read as either seki or ishi, depending on the word.

ElDraco: To Jasonred. "Stone" 石 is pronounced ishi in this case. Some rough rules regarding readings:

Tamsin: What does sashikomi mean?

Tamsin: What is "hanekoumi"? Hane followed by ko? TIA

JF I'm sure you mean hanekomi: a hane into an opponent's wall/group.

Tamsin: Ah, that makes sense. Thanks. By the way, do you or anybody else know where I can find some kind of key on the web for encoding keystrokes as kanji? Also, katakana and hiragana. It'd be tremendously helpful if I could do that. TIA. 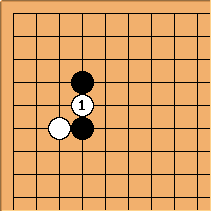 RafaelCaetano: This is not really a "Go term" but one that I often find in game comments: mezurashii 珍しい meaning "unusual". I guess it is Japanese for "wrong or at least doubtful". Is that right? Does it always have a bad connotation (in go comments)?

John F. No such bad connotation. First, the "unusual" meaning is normally in the sense of rare, precious, though it can mean uncommon (usually in the negative). Second, one other meaning, maybe more applicable to your texts, is novel, original. Of course, if it's a pro commenting on an amateur move, it may be a polite way of saying something stronger.

Tamsin, what do you mean by 'key for encoding keystrokes as kanji'? Do you mean a Japanese input system??

Andrew Grant: I imagine what Tamsin's after is a list of Unicode values of kanji and kana so that she can write them directly on to SL pages instead of having to use roumaji. I'd be interested in this myself.

John F. You can do this within GoGoD (Ctrl-Alt + right click on the kanji bar), but you have to make some small changes ($ to &x#..;). BUT, whereas ordinary html pages read the resulting hex codes OK, SL seems not to accept them, so either Arno will have to improve SL's capabilities even more, or you will need to convert to decimal.

HolIgor: I've made myself a small translator program and a dictionary. The program reads and input and checks for the words in the dictionary. If a word is found then it replaces it with the unicode character.

For example, if you want to write 'nobi' then you type at the prompt

If you want to write nobi in katakana then you write

and otain the same in katakana.

I can get two kanji as the output.

The gain is that you have to put an entry in the dictionary once.

Actually, the dictionary is not ready yet, but it won't take long for the kana characters.

The program may be downloaded from

There is a c-code, a short dictionary and a simple Windows dialog application.

The dictionary is very short yet and may contain errors. If you want to add an entry I would recomend to check if it is there first. grep would help. Katakana is in all capital letters, hiragana is in lower case letters, English words start with the capital letters. The spaces between the syllables are necessary if you want to use kana (ex.: NO ZO KI, de su ). The automatic splitting of words into syllables is not reasonable because of the kanji.

If you want to use it I woudl advice to look through the dictionary first.

Sebastian: Great! It would certainly be an asset for people who don't have an IME.

In parsing it, I would allow writing text in one word. Most Japanese words can easily be parsed into syllables. (The exception is when an "n" is followed by a syllable that starts with a vowel. You could disambiguate it by allowing a space, a single quote or a dash in between.)

Not sure about the best way to include kanji, though. Many of them, especially combinations such as "igo", should be fine. But what about words such as "komi", which can be written in different ways, some of which have different meanings? Would you want to program an IME that offers the user a graphical choice between the real charaters? Else, you might consider the option of storing these as something like "komi (points)" and "komi (wedge)" and just display these, along with the kana writing, in a dropdown. Or the user could enter "komi_p", "komi_w" or "komi_k".

BTW, as an alternative for using "_k" for Katakana you might consider uppercase. This would be somewhat related to the use of Katakana in Japanese for text that sticks out.

PS: I inserted a headline and edited your code samples, mainly by removing the spaces.

kokorozashi?: I've only been hovering around this page for a few weeks and just made an account, so I apologize if this isn't the proper place for this comment. It's not an "Igo" term proper, but I thought I'd mention here the word "kouritsu." It basically means "efficiency." I'm currently learning Igo from a 6dan in Japan who speaks no English, and along with the word "seikai" (correct), it's the term he seems to use most often. I've found this term greatly effecting the way I think about the game, as I now consider each move as looking for the most "efficient" move rather than the more vague "best" move. The move that is "seikai" is also the move that is "kouritsu," and the winning player is the most efficient player. I hope that helps anyone reading about Igo in Japanese, or just wants to know the Japanese terms.